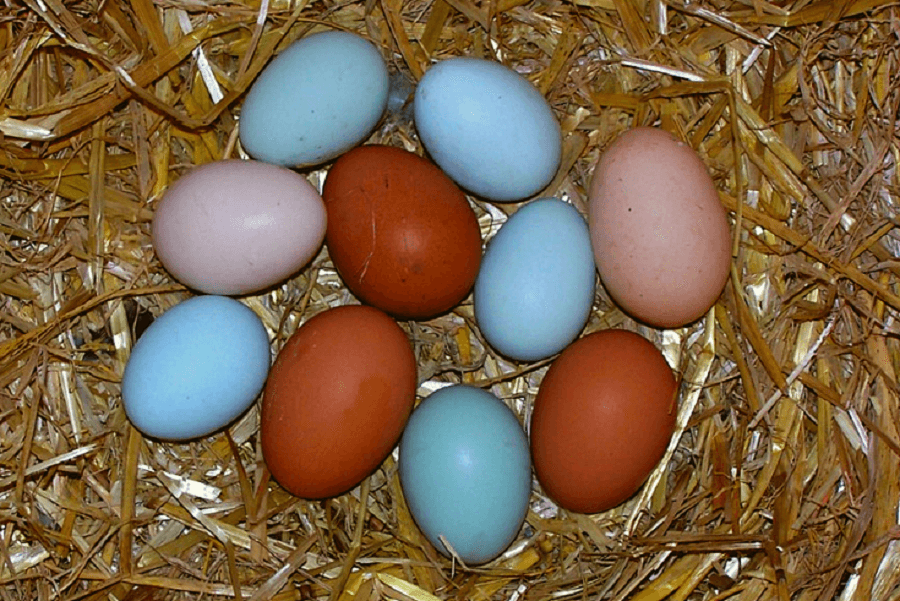 Are you looking to add some beautiful colored eggs to your egg basket? There are many chickens that lay colored eggs, but not all breeds are created equal.

Several breeds of chickens lay blue eggs or blue-tinted eggs. Some breeds may lay a white egg that is tinted blue. If you are looking for colored eggs that are not brown or white, this is the place to learn about the best breeds for colored eggs.

Learn how to tell the difference between these “blue” egg layers.

What Chickens Lay Green, Blue, Pink, or Olive Colored Eggs? There are only two chicken breeds that produce a blue egg. The Ameraucana and Araucana chickens both produce a blue egg. The original “blue gene” comes from the Araucana chicken, which was bred into the Ameraucana chickens. In addition, there are several mutt breeds that produce a lighter blue or a green-tinted egg. Sometimes those crossbreeds are given the name of “Easter Egger” which isn’t actually a breed. It’s branding that loosely covers any chicken that lays a slightly colored egg.

If that isn’t confusing enough for consumers, many hatcheries take the Ameraucana or Araucana breed name and post it or variations of the spelling to sell their mutt breeds so it looks like the pure breeds. They may also create fake breed names and sell them as “rare” breeds when they are actually only Easter Eggers- crossbreeds that have distant ancestry to the Ameraucana or Araucana chickens.

What Chickens Lay Green Eggs? Chickens that lay green egg are bred by crossing a descendant of an Ameraucana chicken blue egg laying chicken with a brown egg laying breed.  The blue gene may be strong if the parents were closely descended from real Ameraucana chickens, or it might be a very weak gene that results if little blue coloring.

The resulting chicks lay a muted egg color that is referred to as green or olive-colored, depending on the marketing of the hatchery. Some of the names used for green egg layers include Starlight, Bluebell Egger, or Olive Egger. None of those are actual breeds as accepted by any poultry standard.

Plus Silkie chickens are known to lay a greenish tinted egg.

Most of these “pink” egg layers are classified as actually laying a light brown or a tan egg. The pinkish hue comes from a natural bloom that individual chicken apply over their egg. It can also come from the lighting when a photo is taken.

Choosing the right chicken breed can be difficult. Many people purchase chicks because they are advertised as blue egg laying chicks, but then they lay a pale blue or a green colored egg, leaving them disappointed. Continue reading to find out how to choose chicks that will lay blue eggs.

The more vibrant and clear your eggs are, the more you can sell them for at the market and the more fun you will have!

The Americana is a crossbreed between the Araucana and the America chickens. They are often confused with Araucanas because they carry the blue-egg gene of Araucanas, but they aren’t as rare as Araucana chickens are.

Also, be aware that there isn’t such a breed as Americana or Americauna. That is a “breed” that is used for Easter Eggers and is used to imply it’s an Ameraucana when it isn’t.

Araucanas have a lethal gene that keeps the mortality of baby chicks high. As a result, Ameraucanas were bred to keep the blue egg gene, but get rid of the deadly gene.

In some countries, such as the United Kingdom and Australia, Ameraucana and Araucanas are considered the same breed.

Ameraucanas are late egg layers, but they lay a moderate amount of blue eggs. They will lay between 150-200 blue eggs a year. That means about 3-4 eggs a week on average.

Ameraucanas have a pea comb, blue eggs, and white foot bottoms. They also have earmuffs and a beard instead of ear tufts. That makes their faces look a bit puffy- like they just came from the dentist!

Tails are carried at a 45-degree angle.  Their eyes are a reddish bay color. Legs and feet are a blue slate to black color.

There are several color varieties including black, blue, blue wheaten, brown-red, buff, silver, wheaten, and white. Their feathering is loose.

You can usually get them through breeders and a few hatcheries.

Some local farm supply stores will carry Ameraucanas, but if they are priced like normal chicks, then they aren’t true Ameraucanas but are Easter Eggers with an Ameraucana influence. Ameraucana chicks are two to three times the price of a regular egg chick.

Caring For Your Ameraucana

They are very cold hardy and don’t get frostbite as easily as some chicken breeds. They are less heat-hardy.  That means you will need to provide shade and plenty of water during the summer months.

They are easier to breed and hatch than Araucanas and don’t have the high mortality rates of their close cousins.

They don’t like captivity but will tolerate it if there’s enough room per chicken. 4 feet in a coop is ideal, while 10 feet per chicken is ideal in a chicken run.

The Ameraucana is rare, but not as rare as Araucanas. Ameraucanas are gentle birds that tame easily. They are a fun bird for a family to raise, but it isn’t a lap chicken. It is usually in the middle of the pecking order, neither the calmest or aggressive bird in the flock.

They can live 10 years or longer, depending on diet and it’s individual genetics. Plus, that long of lifespan is dependant on protection from predators!

Araucanas originated in Chile. They are often lumped together with Easter Egg chickens and Ameraucanas but are a separate breed.

Araucanas come from two very old chicken breeds that are found in Chile. The Collonca and Quetero breeds were old breeds when the Spanish invaded Chile. The resulting offspring of those breeds is an Araucana.

True Araucanas are rare. That’s because they have a fatal gene that causes a high mortality rate in the unhatched chicks. This keeps Araucanas very rare. Ameraucanas are the result of breeding Araucanas to other breeds. They retain the blue egg gene but don’t have the lethal gene of Araucanas.

Special characteristics of Araucanas include tufted ears. Their tufts are visible upon hatching. They can have one or two tufts. Some won’t have any, but two tufts are considered ideal.
They also don’t have tail bones. They are rumpless. They also have tight feathering. They also have a pea comb.

Araucanas were accepted into the American Poultry Association in 1976. Most Araucanas will live for more than 10 years. Araucanas are a very old breed, and because they weren’t imported to the United States until later, they usually wouldn’t be considered a heritage breed. But, because they are a very old breed with distinct characteristics, they are considered a heritage breed. If they go extinct, the strong blue gene will die out.

Crossbreeds of the Araucana, including the Ameraucana, lay lighter and lighter blue eggs as each generation progresses.

Araucanas Are Loved For Their Solidly-Blue Eggs

They mature quickly and lay about 260 blue eggs a year. That’s about 4-5 eggs a week. Hens can be broody and are great mothers.

The shells are blue all the way through, not just on the outside. Although blue eggs were once looked upon with suspicion, they are now widely popular.

If you have an “Araucana” that lays green or olive-colored eggs- then you have an Easter Egger- a mutt chicken with some Araucana lineage, but not purebred.

Marketers advertised blue eggs as healthier for you than white or brown eggs, which isn’t true- they have the same nutritional value, but it made the public more willing to eat blue eggs.

Now, blue eggs are desired for the beauty and variety they bring to a basket of eggs.

Araucanas are rare and you won’t find them at a hatchery. That’s because the fatal gene makes it so that only 25-50% of the eggs will hatch. If you want to raise them, you’ll need to get them from a breeder with a good reputation. Otherwise, you are likely to get an Araucana cross-breed instead of a purebred Araucana.

Caring For Your Araucana Chickens

Even though they are rare, they are not fragile. Araucanas are very strong birds. They are pretty hardy to most chicken diseases and aren’t specifically susceptible to any specific diseases.

They do very well in a free-range environment. Still, they need protection from predators. This can be provided by cooping free-range birds at night or via a chicken tractor.

They are tough birds and are somewhat flighty.  Even so, they do not do well in confined, small spaces, but will do well in a coop that provides enough space.

They are friendly, if raised from a chick, and also very active. Although they aren’t a lap chicken, they do well as a pet and in a backyard where they can run around!

Araucanas do well in any climate, but they are better suited for colder climates. They do come from the highlands of Chile after all!

Araucanas always lay blue eggs and can be ordered from breeders. They are also noisier birds.

The Easter Egger isn’t a recognized breed. It is actually a hybrid breed that is a cross between one of the blue egg chickens (the Ameraucana or the Araucana) and another chicken.

Easter Egger is a marketing ploy for the colored eggs. Easter Eggers are a mutt chicken and not a real breed.

Because Easter Eggers aren’t a real breed, there isn’t a lot of uniformity among different chickens. The characteristics can vary quite a bit.

The main characteristic of an Easter Egger is that they lay colored eggs. They can lay blue, green, olive, or even pink colored eggs.

As a result, nearly any cross of Ameraucanas, Araucanas and other chickens will be called an Easter Egger. Hatcheries or farm stores who have Easter Eggers often try to pass them off as Ameraucana, but the spelling will be wrong. `

They are usually raised by homesteaders for their multi-colored eggs. 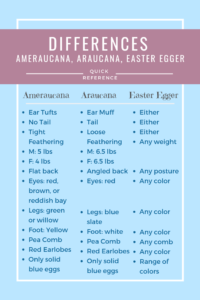