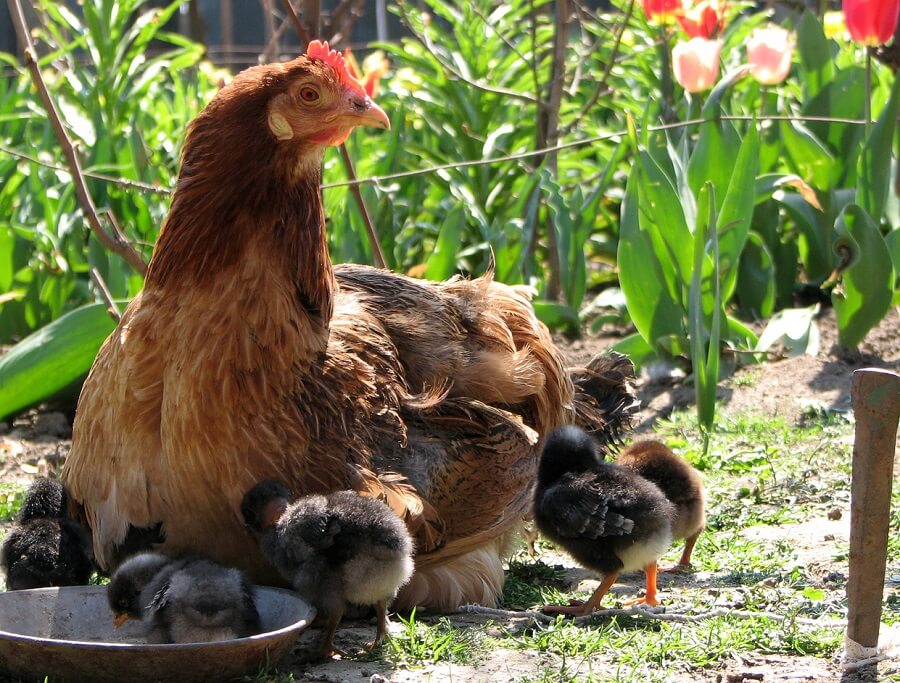 Recently, a mountain lion was found in an empty irrigation ditch on my neighbor’s land. But, big cats are not the only predator attacking chickens. Foxes, weasels, rats, snakes all eat and kill chickens. Don’t forget about the neighborhood cats and dogs, who kill and eat chickens.

There are many ways to protect chickens from predators, but one of the best ways is with an animal guard. But, some animals will guard chickens and not kill them.

What is The Best Animal To Protect Chickens And Eggs?

Dogs, roosters and guinea fowl are considered the best animals to protect chickens. Alpacas and donkeys are also considered strong guard animals. These animals will sound an alarm when predators are close and will attack them and fight them, if necessary, to protect the hens and chicks. Other animals such as geese can also be used as guard animals.

But each animal poses some challenges when used for protection with chickens.

Dogs are playful creatures and can hurt or kill a hen while playing with it. Some breeds of dogs are more likely to be a chicken predator and harder to train. Hunting dogs can often turn into chicken predators.

Roosters pose very little danger to your flock. However, they can’t see well at night so nocturnal predators, such as raccoons, can be a big issue.

Guinea fowl protect against predators. But, they can have additional issues when raised with chickens. Guinea fowl are louder and more wild than chickens. The cocks can often try to mate with hens, which can cause injury.

Alpacas and donkeys are popular guard animals. They aren’t as effective as dogs, roosters or guinea fowl, but will attack a predator that comes close to them.

A guard dog needs to be well trained. Once trained, they can protect the hens at all times including at night. They are also better suited to protect against large predators such as fox, mountain lions, and other large cats, as well as other dogs in the neighborhood.

If you choose to use a guard dog, some breeds are better than others. Use a dog bred as a livestock guard dog and not as a hunter. The most ideal good breeds include:

There are pros and cons to each breed. One important thing to keep in mind is that they will be less likely to kill the chickens they’re supposed to protect if they are raised around them from the beginning as puppies.

By raising them from puppies around your chickens the dog will learn that chickens aren’t toys and aren’t meant to be played with. They will also learn their scent so they can distinguish the chickens from other animals and aren’t surprised or curious about them as they get older.

Best Type Of Rooster For Protection

There are some things to consider when searching for a rooster for protection.

Mid-sized breeds usually work best. They are large enough to fight off predators but small enough that they’re not lazy.

These breeds include, but aren’t limited to:

Of course, like any animal, each breed has its own temperaments and you can have both aggressive roosters and laid-back roosters with each breed. Guinea fowl are very territorial and will protect against any trespasser. This includes both animals and humans.

They can be very loud and screechy so guinea fowl aren’t usually a good option in the city. Their loud chatter helps warn other birds (including chickens) of any danger.

Guineas have retained their wildness. They like to wander and fly well. If they are raised from a keet (baby guineas) and are raised with chicks they are also more likely to come home.

One issue that guinea fowls can have, when kept with chickens, is that the cocks will sometimes try to mate with the chickens. Because their parts are different, this can cause damage to the hens. (Roosters who mate with guinea fowl hens don’t cause damage and the offspring is infertile).

Another issue that sometimes arises is that guinea fowl are at the top of the pecking order. They can conflict with roosters and may bully the hens. This can be minimized by raising them from hatching with chickens. Donkeys have a powerful kick and are used often to protect flocks. When a donkey detects an intruder it’s loud brays and quick chase usually scare off the predator. If the predator doesn’t leave it will fight by raising up on its hind legs and striking with both feet.

Donkeys usually don’t get along with dogs so using a donkey and a dog as a guard animal is not suggested.

Not all donkeys are good guard animals. Jenny’s (female donkeys) are usually used as guard animals more often than males. The Benefits of Alpacas or Llamas to Guard Chickens

Both alpacas and llamas have an intense hatred of foxes. This can be very helpful in protecting chickens against fox attacks. They will chase most four-legged animals similar to a fox, including a dog, out of their territory.

Alpacas and llamas are different animals, although they are often confused for the same animal. They are both very territorial and will guard their space by lowering their heads and rushing toward the intruder. They can also attack using their feet when they get close.

Neither alpacas or llamas usually perceive birds of prey as a danger and won’t protect chickens as well against flying predators.

Both animals should be kept with at least one other alpaca or llama as a companion animal. Other Guard Animals To Consider

Geese are territorial and can help protect your flock of chickens. They can fight off smaller predators such as skunks, weasels, and other rodents.

They cannot fight against larger predators such as Coyotes, large cats, or raccoons. However, they will make a lot of noise and sound a warning when a predator is near. They will also warn against eagles, hawks and other flying predators.

Keep in mind that if you have more than one goose they may be less protective of the chickens but they will still sound a warning and protect themselves and other geese. Other Ways To Protect My Chickens

Guard animals are great to help warn your flock when predators are near and to protect them but there are some additional steps that you can take to protect your chickens without the use of guard animals. These suggestions will also help protect them at night.

By following these suggestions you may be alright if you choose to use a rooster, goose, or another animal that sleeps or can’t see at night.

By providing your flock with a safe home you can also help protect them and keep their stress levels low.

What causes stress for chickens?

Turkeys are not known to be good guard animals. They may be more aware of predators than chickens and have been known to fight a hawk but that is more to save themselves then chickens. Most turkeys will turn and run for shelter.

How To Train Your Dog To Protect Chickens:

It is easiest to train dogs to protect chickens if you start when they are puppies. But if you feel like your adult dog can handle it go ahead and give it a try.

I've grown up around farm animals and loving every part of country life. I'm excited to share what I've learned with you!