Raising chickens isn’t just about the highest egg production or the fastest-growing meat. It’s also about having fun and enjoying your chickens. Some chicken breeds are fun, gorgeous, and unique. These Japanese chickens will turn your neighbors heads and be the talk of the town.

Of these prettiest chicken breeds, four of them originate from Japenese Chicken breeds. Those breeds are:

In addition to being rare and exotic, these breeds have also helped to start several modern breeds. Sadly, the original breeds are very rare. Raising chickens in any of these breeds will help to conserve the breed.

Onagadori chickens are very rare, even in Japan where they have been cultivated for hundreds of years. Onagadori are very long-tailed chickens.

Onagadori chickens were designated a Japanese National Treasure in 1952. It comes from the Shikoku island in South Japan.

Onagadori means either “honorable fowl” or “long-tailed chicken,” depending on the translation.

They have been bred with a rare gene that doesn’t molt the tail feathers. As a result, the tails can get exceptionally long, as long as 30 feet.

Emperors bred this trait and used the Onagadori as ornamental birds in royal gardens. The bird traces it’s breed back to the 1600s.

In order for Onagadori chickens to get such long tail feathers, special care must be taken to protect the roosters from weather, mud, dirt and wear.

Roosters are generally 4 lbs and hens grow to 3 lbs.

Purebred Onagadori are very rare. It is thought that there are no purebred in the United States and less than 1,000 purebreds in Japan.

In Germany, the Phoenix was bred from the Onagadori Chicken, an ancient Japanese chicken breed. Onagadori Chickens have a rare gene that stops molting so tail feathers grow to be as much as 22 feet long.

But, they take specialized care and grooming. Onagadori chickens are also very delicate in their health. In Germany, Mr. Hugo du Roi wanted to create a healthier, hardier chicken from the Onagadori.

He bred a small number of imported Onagadori with other local chickens including the Malay, Leghorn, Modern Game and others, to make a heartier chicken.

As a result, Phoenix Chicken molt every year or two, but are still able to grow long beautiful feathers. Their sickle feathers can get between 2-5 feet long, depending on the specific heritage of the chicken. The saddle feathers can grow to 12-18 inches.

He named them Phoenix because the chicks seemed to “rise from the ashes” of their soon dead parents. They were imported to the USA before 1924. (The feature chicken is also a Phoenix chicken) 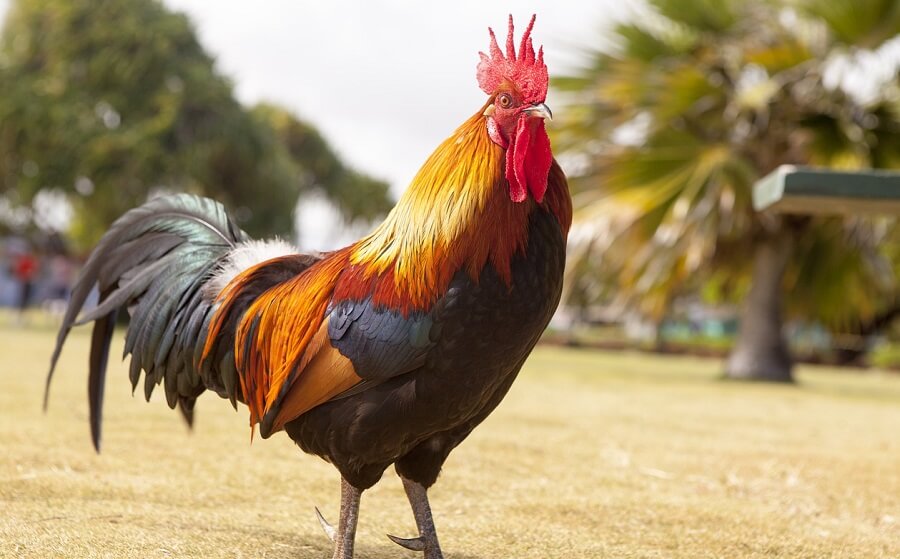 Reasons To Own A Phoenix Chicken

The Phoenix chicken is a beautiful ornamental chicken. It is often raised for shows or to add beauty and grace to an existing flock. When a Phoenix is around, there is always a conversation starter.

Many people have never seen such beautiful, colorful chickens and are fascinated by them. Phoenix chickens are also lovely in shows.

Phoenix are ok layers. They lay about 1 small-medium sized egg a week. The egg will be cream-colored or slightly tinted. They can lay as many as 70 eggs a year.

A Phoenix chicken has beautiful, long tails. Although they aren’t as long as Onagadori chicken tails, they are lovely and make a beautiful addition to any backyard or farm.

They have three recognized colors, Silver, Golden, and Black-breasted. They have white earlobes and red wattles and combs. Their comb is a single comb with 5 points.

Phoenix chicken breeds are considered by many to be a heritage breed chicken. They are hardier than their ancestors and should live for 5-7 years.  They may live longer, but there are not enough purebred Phoenix chickens to get an accurate average age. Most are killed by predators or die other premature deaths.

Caring For Your Phoenix Chicken

Phoenix chickens have pheasant-like characteristics that come from their more wild parents. They like to perch in high places and trees. They can fly and need a lot of room. If they are cooped, they need a large coop. Otherwise, the other chickens step on their tail feathers.

Your Phoenix chickens will also need extra protein while their tails are growing. This will help to keep them healthy.

They will also need their coop cleaned frequently to keep their tail feathers from picking up the muck from the coop.

They do very well in a free-range environment because they are very alert and active. Phoenix chickens are good at roaming and they like freedom.

They are not cold hardy but do pretty good in the heat. Phoenix chickens are shy chickens and not usually friendly to people. They can be tamed if they are handled often from a very young chick.

They are listed in a watch status by the American Livestock Conservancy.

The Shoukoku, also spelled Shokoku, is believed to have been the ancestor to all the other long-tailed chickens including the Phoenix and the Onagadori chickens. However, recent DNA tests indicate that it isn’t the case unless the Shoukoku are very ancient ancestors.

It was originally imported to Japan from China 2,000 years ago.

It is a very popular bird in Japan but is very hard to find in the US. Many heritage Shoukoku can be found in Germany.

There are many colors including black-breasted, silver and white. They are mostly used as ornamental chickens but are sometimes used for meat.

Eggs are tinted. I couldn’t find any information on how many eggs Shoukoku hens lay a year.

Until the 1860s most chickens in Japan were raised as ornamental chickens and weren’t eaten.

Totenko Chickens are a very rare Japanese breed of chickens. They are exceedingly rare.

Totenkos are a Japanese national monument chickens. It is a long crowning and long-tailed chicken. It looks a lot like a Phoenix.

Phoenix chickens have slate colored legs and Totekno chickens have olive green legs. They also have a bigger fanned tail than Phoenix.

They have white earlobes and red wattles. Their coloring is red hackled.

They are not very hardy outside of Japan. This is especially true if they are caged.

Totenkos have done better outside of Japan when they have been free-ranged.

They are prolific layers and lay about 120 eggs a year, another difference from the Phoenix.

While these beautiful chickens are rare, the Phoenix and Shoukoku chickens can be found and purchased in Europe, Australia, and North America. They are beautiful show birds with rare plumage.

These four chicken breeds will definitely make your neighbors turn green with jealousy. They will provide beautiful eye candy and be entertaining to watch.

But, if you want a little less-rare chicken that is still beautiful and unique, then check out these beautiful chickens that add variety to your flock.

link to How Much Does a Donkey Cost to Buy and Keep in the USA?

Not long ago I researched the cost of a donkey before purchasing my own. I found numerous articles online that said that donkeys are inexpensive animals. Writers compared them to horses and said that...

Rabbits molt every year, but sometimes hair loss is caused by an underlying health issue. Rabbit owners need to understand the additional signs and possible causes of rabbit hair loss. Why is my...

We are passionate about farm animals. Collectively, we own horses, donkeys, chickens, ducks, pigs, alpacas, cows, and other animals! We have years of experience. Best Farm Animals is the ultimate resource for learning everything you need to know about your farm animals.