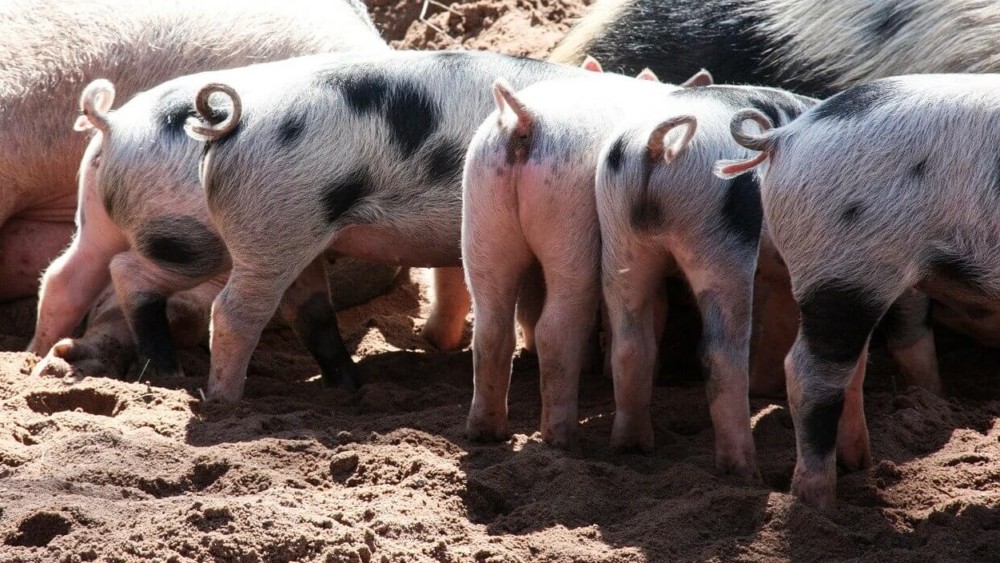 Pigs have become one of the most loved animals in recent years. The growing popularity of pig decoration, pet pigs, and pig obsession has many people asking about pigs.

Some of the common questions include curiosity around why pigs have curly tails if the tail indicates a pig’s emotional health and other similar questions.

This article will answer those questions.

Pig breeds that originated out of China have curly tails. It’s believed that any pig breed with at least some ancestors out of China will have a curly tail. In China, pig fighting has been a popular sport for thousands of years.

China is one of the few countries in the world that still allows pig fighting. During a pig fight, the pigs bite each other’s tails. As a result, pigs with curly tails are more likely to win the fight. Over thousands of years, the winning pigs, aka the survivors, developed curly tails.

Another theory is that Chinese farmers liked curly tails and purposefully bred curly tails into their pigs. This could have also been because some pigs were then used in pig fights.

Or, it could be a trait that was developed from wild hogs, a few of which have curly tails in China. But, contrary to popular belief, China has wild hogs without curly tails as well.

The belief that all pig breeds with curly tails originate from China cannot be proved. For example, the Large White Pig originates from Yorkshire England, not China. Chinese pigs could have been used as some of the parent breeds of the Large White Pig, but that would have had to have been thousands of years ago.

Conversely, the Meishan pig, developed in China has a straight tail.

Before that, it seems like people really didn’t pay attention to the breeds of pigs or their origins.

A less likely theory is that a pig’s curly tail was developed to prevent farm pigs from biting each other’s tail. This theory arises from the problem of factory farm pigs, who have a tendency to bite each other.

Factory pigs usually have their tails docked and their teeth shortened to prevent this issue. However, the issue of pigs biting each other is usually only an issue on factory farms. On the family farm or rural farm, pigs seldom bite each other.

The stress of many hogs raised in a smaller area brings out the biting tendency. In the past, pigs weren’t confined to the same degree and so probably didn’t have the tendency to bite each other.

Do all pigs have curly tails? What does it mean when a pig’s tail is straight?

Farmers have been saying that for decades.

Indeed, farmers have long noticed that pigs whose living conditions are filthy or crowded have straight tails. This also happens when pigs have infrequent or unreliable food sources.

If pigs are stressed out, they are much less likely to have a curly tail.

This has also been demonstrated by individual pigs. Often, a pig that is purchased or adopted from a stressful environment into a calm, cleaner one, will have a curly tail after a few months of the new lifestyle.

For some breeds of pigs, a curly tail that goes straight can mean that the pig has too many worms for its comfort. Most pigs have at least some worms, but when the worms become overwhelming to the pig’s health, it can affect the tail.

At that point, the tail may straighten.

Why do wild pigs have straight tails?

In Texas, much of the Southern United States, and parts of Canada, once domesticated pig breeds have become wild feral pigs. Over the last few decades, these feral pigs have grown in great numbers, even to the point of threatening native plants and animal species.

And those feral breeds have straight tails, even though their ancestors had curly tails.

One theory revolves around the happiness in pigs that are believed to be shown in the curly tail. If a pig’s curly tail demonstrates contentment in a pig, then a wild pig may have a more stressed-out lifestyle.

It may also be that a straight tail shows neither happiness or stress, but a neutral attitude.

Either way, the curliness of a pig’s tail will continue to be studied and theorized about.

Do pigs tail wag when happy?

But the study in the Netherlands found that pigs can also wag their tail when stressed and when displaying positive social behavior.

A pig’s tail wagging can be an indicator of a happy pig, an exploring pig, or an upset pig. You can best tell the mood of your pig by watching other indicators of your pig’s mood. These indicators include the sounds your pig makes, whether it is active or lethargic and the level of aggression your pig displays.

Do mini pigs have curly tails?

As a result, most pigs that are marketed as mini pigs do not have curly tails.

These other articles about pigs may be useful to you as well.

How To Care For Your Pet Pig, Everything You Need To Know

Do Pigs Have Sweat Glands And Other Interesting Facts

Why Can’t Pigs Look Up At The Sky? (And Other Interesting Facts)