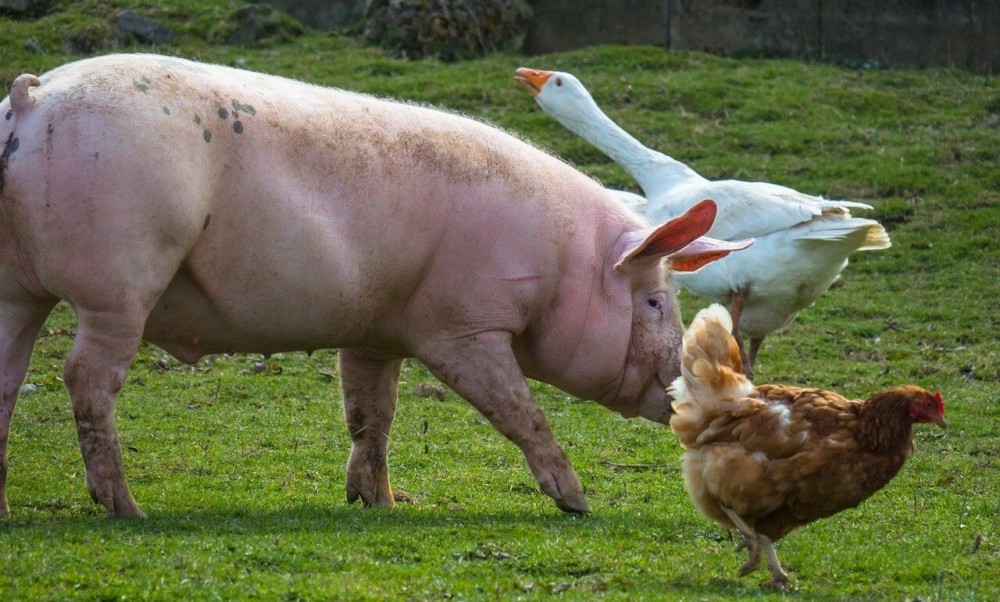 If you are raising animals or starting a small or hobby farm, you may be wondering which animals you can house together.

Is it possible to keep chickens and pigs together? Yes, it is possible, if you have the room to do it right. You will also need to closely monitor them for the first few months to make sure the chickens are safe. It also helps to raise your piglets around the chickens. Some issues can arise, but if you take appropriate measures, it is a situation that can be beneficial.

I have spent most of my adult life believing that it was impossible to keep chickens with pigs because the pigs would go after the chickens.

Pigs are omnivores. They eat not only plants but also meat. This means that in some cases, pigs can become aggressive. They have on occasion been aggressive toward their human owners. In other situations, they can be aggressive toward other animals as well.

But, as I have learned recently, this is not necessarily the case, and there can be benefits on both sides to this unlikely arrangement.

If you want to house pigs and chickens together, there are a few things you should be aware of to ensure the safety of both species.

There are a few things to keep in mind if you do decide that you want to allow your chickens access to where you plan to keep your pigs.

Room to Forage, Room to Grow

When it comes to housing pigs and chickens together, one of the biggest mistakes that a farmer or a homesteader can make is to not give an appropriate amount of room for both the pigs and the chickens.

A small pig pen gives the chickens less room to run and a more suitable target for a pig that decides to hunt. This is definitely not an ideal situation if you want to allow chickens around your pigs.

Instead, you would want to have an open foraging area for the pigs, preferably with some woods that they can forage in as well. The additional room and lack of corners give the chickens more chances to get away if a pig gets in the mood for chicken for supper.

It also makes it too much work for a pig to chase after the chickens.

The better option instead of a pen is to fence off half to a full acre for them to move around in.

By eliminating the chance of a chicken getting cornered, you have reduced the risk of the pigs going after any of the chickens, at least in any serious type of way.

Keep in mind that not much will stop a determined pig if it wants to break free. For this reason, electrical fences are the best option for keeping your pigs contained.

Due to the lack of grounding, if a chicken lands on the wires, it is safe from being electrocuted. It is the connection between the wires and the ground made by a body that will cause the shock.

So, if you have a lower wire that your chickens can touch while on the ground, this poses an issue. Chickens and pigs need different voltages to be safe. Check out this article on electrical fences for more information.

Pigs that are hungry are pigs that will seek a variety of food sources. This doesn’t apply to just wild animals either.

Ensure that your pigs always have an appropriate food source and are never left to go hungry between meals. They are more likely to leave your chickens alone.

Plus, the chickens won’t be chased off of their feeding trough as quickly either.

Once a pig does get a taste for chicken meat, you will have no choice but to separate that pig from your chickens.

Once a pig tastes chicken, it will have a taste for it and will continue to seek that as a food source.

Benefits to Chickens with Pigs

There are a number of benefits to letting the chickens hang out with the pigs, assuming appropriate measures are taken to ensure the safety of the chickens.

First, the chickens will go after any bugs they find around the pigs, including maggots that could turn into biting flies. This helps to reduce the risk of the pigs getting bitten, which could cause issues with them.

Another advantage is that pigskin gets itchy, especially as the mud dries on their skin.

Some chickens will decide a pig’s backs are a good place to hang out. They will help to scratch those hard to reach spots. This allows for a direct benefit from the chickens sharing their space.

One of the main advantages for chickens is some serious protection. Birds of prey stay away from chickens that are housed with pigs.

Not even a hawk would be brave enough to get near a bunch of hogs to try to grab a chicken. Four-legged predators will also keep their distance simply cause the pigs may tear them up, and their lives are not worth risking for an easy meal.

Disadvantages to Chickens in the Pig Area

It isn’t all good, however. There are a few disadvantages you and your chickens could face by housing your pigs and chickens together.

One of the main reasons that homesteaders or small farm owners keep chickens is to get fresh eggs.

Your ability to get at these eggs may be negatively impacted when you house chickens and pigs together. Your chickens may feel comfortable laying their eggs in the pig area because the pigs offer them protection.

The biggest problem with this is that though the pigs may leave the chickens alone, eggs can’t run, and they make for an easy snack.

You may end up losing half or more of your eggs when your pigs get to them first. Plus it can be a pain to search through the pigs’ area to find the eggs.

Even if the pigs don’t eat the eggs, they are more likely to get trampled and ruined.

Remember that pigs are intelligent creatures. Once they notice that eggs are getting laid in a certain spot, especially if you find that spot, they may start going right behind the chicken and snagging the egg before you even have a chance to find it. Just because a pig will leave the chickens alone does not mean the eggs are safe. Those become fair game, as far as the pigs are concerned.

Your chickens may find that they prefer the taste of the hog feed, which means they won’t eat as much chicken feed.

But, your hogs may also eat your chicken feed. This is usually more expensive. The only way to combat this is to get your chickens to eat hog feed instead.

In some places, such as in Canada, the pig feed and chicken feed are very similar. It depends on each supplier.

Check with your supplier to see if it would be safe to feed your chickens hog food. This can help save money in the long run.

One thing that swine food is definitely lacking is the extra calcium that laying hens need to make the shells. This can be fixed by offering the chickens either eggshells or oyster shells. While eggshells would normally just be tossed or composted, they can be fed right back to the chickens that laid then, if some steps are taken.

Assuming that the feed is otherwise the same, any nutrients other than the calcium will probably be picked up during foraging, at least in the warmer months. You may need to pick up something like a flock block (yes, its a real thing) that has additional minerals and vitamins that chickens need for during the winter months.

Some bacteria and viruses can be transferred from fowl to swine.

This includes salmonella, which may not harm the chickens, but can be very harmful to pigs. It is passed on through the feces of the chicken.

Thankfully there have been vaccines developed that could prevent salmonella infections in both swine and chickens. If appropriate measures are taken, it can reduce the risk in both species.

Another risk is swine flu, which is a mutation of avian flu. There are a few diseases that can transfer from pigs to birds and vice versa. As long as you take precautions, you can limit the risks to both species.

Suitable Food For Both Pigs And Chickens

There are foods that are healthy for both chickens and pigs. You can give them table scraps.

Chickens shouldn’t get salty table scraps but will love fresh fruits and vegetables that you don’t want to feed to your family. Pigs also love this.

You can also look into sending scraps to your animals rather than to the compost pile. When humans prepare food, we tend to skin carrots, cut off the end of berries and not eat the outer skin or rind, and these things can make good treats for both pigs and chickens. They can be added as a slop or be given individually. This can include things like:

Plus there is the vegetation that is leftover from a garden that can be fed as well. Once the growing season is over for annuals, the plants can be pulled up and fed to the animals as well.

If these things are fed in a trough, it will give both the pigs and the chickens a chance to get some yummies that regular feed just does not provide.

Since both animals are omnivores, things like bones and fat could be appreciated too. However, I would put some thought into things like chicken bones. While both will eat them, if fed to the pigs, they may decide that chicken is a tasty snack anytime.

You may also find these articles helpful.

Do Pigs Have Sweat Glands, And Other Interesting Facts

Which Animal Is More Profitable Pigs Or Cows?

Why Can’t Pigs Look Up At The Sky? (And Other Interesting Facts)