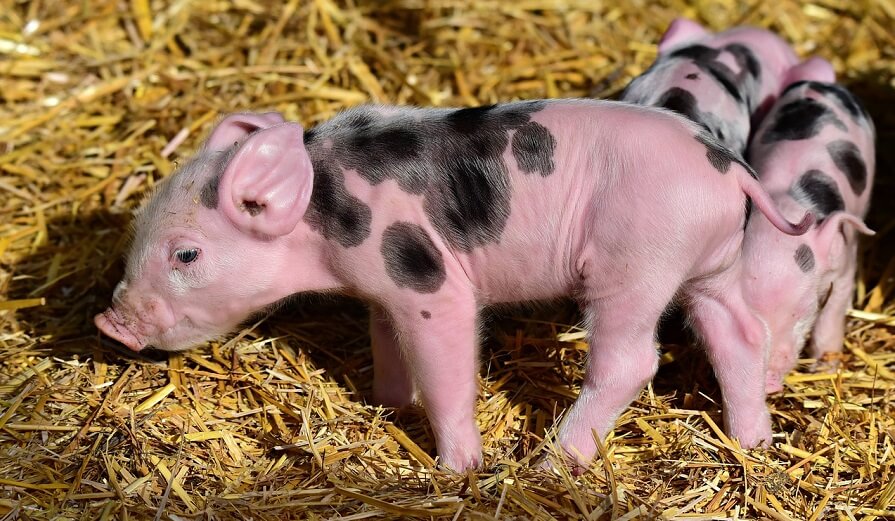 Growing up around pigs there were two main things I realized at a young age. First, they constantly roll around in the mud. Second, they taste amazing! I don’t know about you but I love pork, especially bacon.

When I was young there is one question that I never thought to ask my dad;

Do pigs sweat? No, pigs do not sweat even though they have sweat glands. Their sweat glands don’t respond to thermoregulatory cues. Those are the cues that cause people to sweat when it gets hot. Pigs can become overheated very quickly in the heat if they don’t have access to shade, mud, or water.

When some animals, including humans, get really hot, they secrete sweat, a mixture of about 99% water and 1% other compounds such as sodium chloride and proteins. Sweating helps regulate our internal temperature so we don’t get too hot on sunny days or while exercising. Although, pigs have some sweat glands, their glands don’t reduce pig’s internal body temperature. This makes cooling off in hot weather difficult.

But that isn’t the only interesting things about pigs and sweating that you should know. And, it leads to a few other important questions. Keep reading to learn more.

Why Do Pigs Wallow In The Mud?

Pigs wallow in the mud because they have very few sweat glands and have a hard time staying cool during the hot months. The mud keeps pigs cooler because the water in mud evaporates at a much slower rate than water does by itself.

That means that pigs can stay cooler longer.

But, it has another purpose.

It helps them protect their pale skin from getting sunburned.

But that’s not all.

Pigs may wallow for other reasons as well. Wild pigs are often seen wallowing in the mud even in cooler temperatures. Many believe this helps rid them of parasites such as ticks and lice so it helps keep them healthy as well.

Just because pigs wallow in the mud doesn’t mean they’re dirty animals. In fact, pigs are considered fairly clean. When given enough space, pigs will designate a “bathroom” away from where they eat, drink, and live.

They will also clean up the area by eating food that may have been spilled. They are considered one of the cleanest farm animals. Let’s recap. Pigs roll in the mud for 3 main reasons.

Does Pork Have Toxins?

We’ve established that pigs don’t really sweat. Because of this, many believe that there are high concentrations of toxins in pork.

Is Pork A More Toxic Meat To Eat Than Other Meats?

Although pigs do not sweat, pork does not have more toxins that other types of meat. There are two main reasons pigs are not more toxic than other meat.

These organs filter out any excess toxins that may have gotten inside their bodies. The liver detoxifies and cleanses the blood.

The kidneys filter waste materials from food and balance the blood. It also removes excess minerals from the bloodstream.

Pigs have both a liver and a kidney.

If sweat glands determined the toxicity of the meat, then both chickens and cows would be toxic for people. Only humans have a high number of sweat glands for their body size. Other animals, in comparison, sweat very little.

Third, it has been said that pigs get worms and other parasites because they can’t sweat them out.

Humans have a lot of sweat glands, 2-5 million of them, yet we can’t sweat out parasites either. They are just too big to fit through a sweat gland.

Reasons Pigs Are Not More Toxic

If a pig does have worms or other parasites your best option is to have them see a vet where they can be dewormed, just like a cat, dog, or other animals.

And, your safest practice when eating any meat is to thoroughly cook it so that any parasites or germs (think e coli) can be killed before it is consumed.

What Do Pigs Eat?

Pigs are omnivores, which means that they can and will eat both plants and meat. This makes feeding them easy. They like fruits and vegetables such as beans, tomatoes, berries, and corn.

They also like meat which includes dairy, chicken, beef, and even leftover bacon.

Here’s a rule of thumb:

If humans can eat it so can pigs.

You can even feed them the leftover food from your table.

But, like humans, it’s important to make sure they have a healthy diet. Plants like grasses, roots, and vegetables are the best and healthiest for pigs. Fruits shouldn’t be fed to them too often because of the sugar but in small quantities is perfectly fine. You can also give them pig pellets to help make sure they get the nutrients they need.

There are some foods to be aware of.

Pigs shouldn’t eat raw potatoes, unripe tomatoes, and parsnips. Try not to feed them anything that is moldy, some molds can be harmful to your pigs. You should also make sure they aren’t eating too much sodium.

If you raise pigs consider giving them enough space to forage. Foraging allows them to eat fresh grass, roots, and bugs. Pigs that are allowed to forage for food produce meat that is higher in vitamin D and other minerals. One thing to keep in mind, if you allow your pigs to forage, make sure there aren’t any poisonous plants. They can be harmful to pigs.

While pigs can and will eat everything, including garbage if they’re desperate, they usually only eat plants and meat. Even wild pigs stay away from harmful food and mainly stick to eating what they can forage.

There are many reasons people choose not to eat pork. According to research, pigs are among the top five smartest animals. Though the order of the various lists changes, chimps, dolphins, pigs, and dogs are usually in the top of those lists.

Researchers in the 1990s tried teaching pigs how to move a cursor on a screen with their snouts. They would use the cursor to point out images that they knew and were familiar to them. They claimed the pigs picked it up almost as quickly as chimps. Others taught pigs how to do tricks like you would dogs. The pigs picked up the tricks just as easily.

Pigs can make wonderful pets, but there are several things to consider.

Several of the positives of using pigs as pets include:

But there are a few negatives to raising pigs as pets. These include:

That means that pigs can be dangerous for small children because of their large size. Even if a pig doesn’t mean to hurt a child, accidents can happen easily.

Here are a few things to consider when raising pigs as pets.

Pigs like to root around, forage, and explore so they need a lot of room both inside and outside. Keep this in mind when considering one as a pet. They also love attention! Be prepared to spend time with them and take care of them. While they won’t jump up on you like dogs they do like to lay or sit by their owners for some cuddle time.

They also become attached to their owners quickly so make sure you do your research and find out if a pig is right for you before purchasing one. If a pig becomes attached and then is separated from those they’re attached to they experience depression and sadness.

What Kinds Of Meat Comes From Pigs?

Pigs are found in most parts of the world making them one of the largest meat sources. Pork is now considered “the other white meat” largely because it is a healthier alternative to red meat such as beef. Some cuts, such as pork chops, are even healthier than chicken thighs. Pigs provide us with many different cuts of meat including

These cuts of meat can be a healthier alternative to its beef counterpart. You could try substituting pork chops for steak or cooking a pork roast instead of a beef roast.

Where does the expression “Sweating like a pig” come from?

The expression “sweating like a pig” has nothing to do with the farm animal since they don’t really sweat. It refers to pig iron. When smelting the iron,  blacksmiths would use molds that looked like piglets suckling their mother, which is where it got its name.

After pouring the iron into the molds the metal would be too hot to touch. Blacksmiths would know when it cooled enough to touch when the iron started “sweating”, forming water droplets on the surface of the metal.

Why Don’t Pigs Look Up?

What Animal Is More Profitable: Pigs or Cows?

I've grown up around farm animals and loving every part of country life. I'm excited to share what I've learned with you!