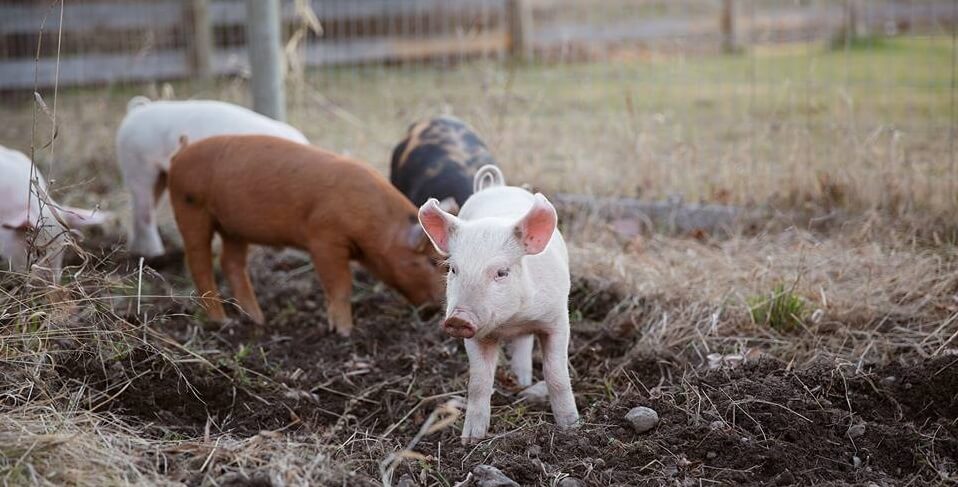 Goats and pigs have some similarities, in that they both live on farms. But they also have a lot of differences, such as requirements for living, and their display of social behaviors. They can both get a little wild sometimes.

Can goats and pigs live together? Goats and pigs can live together, but there are a lot of risks with very little benefits. These two animals don’t always live in harmony. Pigs can be aggressive to goats and, in some cases, have been known to eat baby goats.

You don’t often see many other animals mixed into a pigpen. This is because pigs can be very territorial and aggressive. There are few benefits to putting goats and pigs together in the same living space. Let’s see if we can find any.

Pigs like being together with other pigs. In fact, they tend to need the company of other pigs. But they don’t always do well with other farm animals in their space.

They have been known to eat chickens who enter their pen.

Remember that pigs are omnivores and will eat meat as well as vegetation.

If a pig sizes up another creature and determines it’s weaker than itself, it may just decide to show the other animal who is boss. They will let their dominance be known. They can injure or kill other, smaller animals.

Pigs are known to do best when housed with their own kind. A pig can, and might, eat a goat housed with it.

The only way cohabitation may work well between a pig, and a goat is if several different kinds of animals, such as cows, goats, pigs, and sheep are all sharing the same pasture and raised together. Different social habits can be established if pigs aren’t the biggest animal in the space.

If it were up to the goat, everyone would get along. Goats can peacefully roam in the pasture with any number of farm animals: horses, cows, sheep, you name it. Goats are social and friendly. But they’ll also eat other animals’ food. Which can cause its own set of problems, if there isn’t enough food to go around.

If given enough space and resources, a goat will do its own thing and maintain a simple existence among other peaceable creatures. You’d never house them with a predator, of course. Wolves, dogs, or foxes should never be allowed with other animals, anyway.

If pigs and goats were kept together, care would have to be taken to keep them apart during feeding and to remove feed after feed time.

Keeping the two animals apart would prove very difficult with pigs because they are smart and assertive. They tend to know how to get what they want. 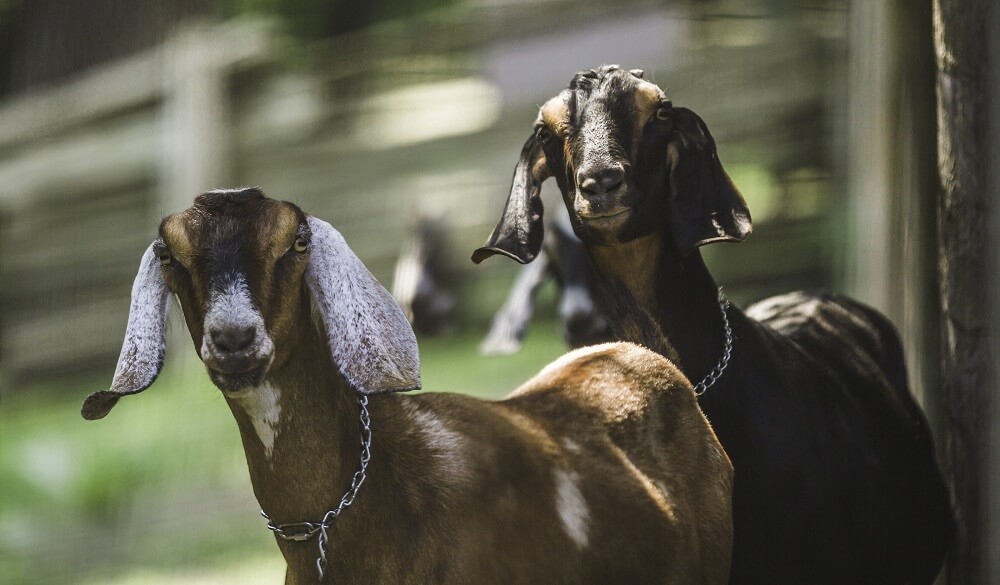 Positive Effects of Keeping Pigs and Goats in the Same Space

There aren’t many positives to having goats live in the same area as pigs. The only benefit is that you don’t have to build two separate living areas. When you only have one living area for both it can save a lot of land, time, resources, and upkeep if they get along.

But it is unlikely that these two animals will get along peacefully, happily and healthily.

Negative Effects of Keeping Pigs and Goats in the Same Space

As discussed before, pigs can get extremely aggressive. They may even kill baby goats in their enclosure, and once they eat meat, they can get very brutal, if you want to see this in action to see for yourself, then it recommended you throw a snake inside a pig enclosure.

Pigs are great snake killers, and they will fight very brutally against each other to eat it. This should give you a firsthand account of what the pigs are capable of in a certain mindset.

Without your supervision, you will never know if you can trust pigs with goats. They may get triggered when you are away and start attacking your goats.

Here’s another thing to remember!

The feed for pigs can be toxic to goats. It can make them very sick and possibly cause death. The pig feed could be medicated, and goats have very sensitive systems where even a little imbalance could cause problems. Corn isn’t very good for them, and they could develop acidosis.

Goats, when well taken care of, can live for 12-14 years on average, while some can live much longer. Here is some basic information about these animals, in case you are considering keeping goats.

You always need clean, fresh water for your goats, its best to use heavy, durable containers so that they don’t break or spill. One of the key parts of your goat’s nutrition is minerals either in blocks or loose.

For feeding keep in mind that goats have multiple stomachs, and they rely on hay and pastures for their diets. They will graze for at least eight (8) hours a day. Grain has a lot of fat and shouldn’t be used very often.

The best pastures for goats are mixed grasses and clovers with an occasional brush, trees, saplings, and twigs. They love tree fruit prunings, dead leaves, and wild grapevines. Make sure all poisonous plants are removed from the goat’s area.

If the goats are adults, they will need between two and four pounds of hay every day. Timothy hay is the best all-around type of hay while alfalfa hay is extremely high in protein, being the best feed for sick or hurt animals who need to fortify their strength.

Your goats should optimally have a check-up with basic procedures done every 5-6 weeks. This should include:

Symptoms to look out for in case your goat has an illness, loss of appetite, limping, listlessness, diarrhea, labored breathing, discharge in the eye or nose, abnormal body temperature.

Vaccines to make sure your goats have:

Goats aren’t too difficult to take care of, as long as they have good quality pastures, healthy food, sanitary housing, lots of healthy sunshine and an attentive owner.

Creating Shelters and Fencing for Your Goats

Goats can stay in a barn or a large shed. Make sure there is at least 25-square-feet for every goat. Make sure the building has good ventilation, but no drafts that will directly hit your goats.

Keep all the straw for bedding clean and dry and remove all damp or soiled straw.

The areas that they roam and graze on will need to be fenced in. This is especially important for areas that have wandering dogs, as they can kill a goat in a few minutes. The stress of being chased by a wild animal can also kill a goat in and of itself.

Goats are excellent at escaping enclosures, so do not use cattle fencing. Goats can stick their heads through and get stuck. Make sure the fence is tightly woven, and at least five feet high, never use barbed wire or electric fences. These won’t keep out predators and can hurt your goats especially if they become entangled in them.

It isn’t recommended to tether your goats because they can become stressed and they may hang themselves while attached.

The ratio to follow for land to goats is ½ acre for every two goats. If there is warm weather, make sure there is plenty of shade available. Keep trees you want protected fenced because goats are known to destroy them if they aren’t guarded.

Diseases that Goats Can Transmit to Humans

Goats can you transmit a couple of diseases to humans and some, to other animals:

Pigs are very smart creatures. They develop their own social hierarchies with herd dynamics. Individually pigs have complex emotions and thoughts. Pigs are happiest when they live with other pigs so if you’re getting one it would be best to get two. 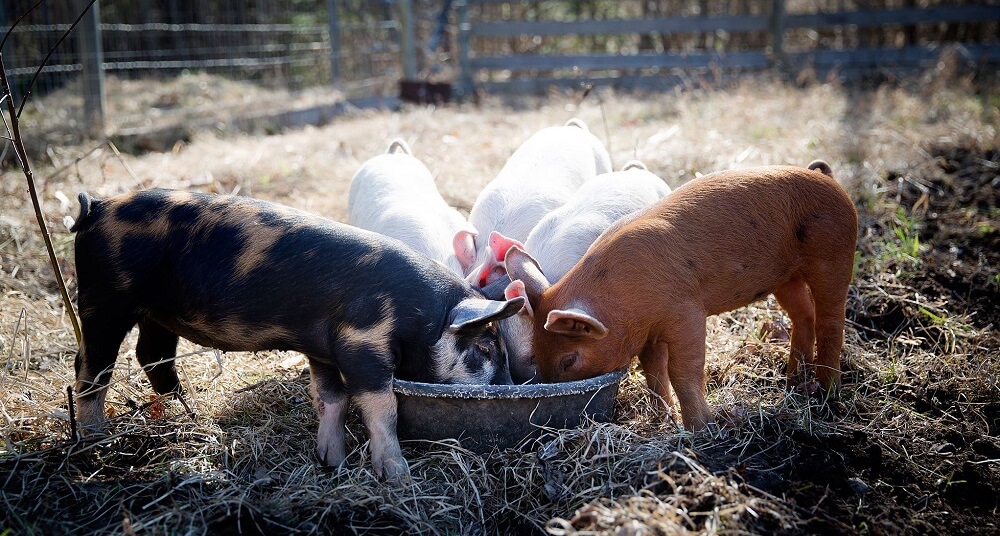 Pigs are known for showing behavioral issues that “challenge” other animals or people, this includes lunging at them, or nipping at them to get attention. Pigs play these games with each other. If they do this to you and you move away, they think they won and they’re dominant over you.

Showing Your Pig that You Are Boss

One way to correct this type of behavior is to set boundaries with a stick and defend that bubble as your personal space. Use the stick as an extension of yourself and position it so that your pig bumps into it. If they stop and don’t run into the stick (your space) then reward them with a pet and scratch with the stick.

This lets the pig know where your space is and warns them not to come into it unless they are invited.

These behaviors work with other pigs because they work out a certain dynamic in the herd where every pig has a position, including the leader. Pigs need a leader because in the wild the leader would make herd decisions like where to sleep, eat and drink from.

Having more pigs will mean that they will greatly reduce these shows of dominance because they can work out dynamics socially, which is natural to them.

How Do Pigs Get Along with Other Animals?

Pigs can get along with other animals, but they’re best with other pigs. Riskier than allowing goats with pigs is allowing pigs and dogs to be in the same space. In this case, the dogs are predators, and pigs are the prey. Without human supervision, there is a great chance that attacks, and injuries will break out.

More often than not, pigs will have problems with other animals. There are some cases where they can be completely fine, but it depends on the environment and the attention of the owner/keeper.

How Do Pigs Get Along with Other Pigs?

Pigs are inherently prey animals. This means they can easily feel threatened, so when they are around other pigs, they feel much safer. They will eat, play, sleep together and sort out herd dynamics.

Other animals can’t provide the same companionship, enrichment, physical, and mental stimulation that pigs can. Pigs can become depressed and bored without a companion this could possibly lead to them exhibiting destructive behaviors.

With one solitary pig,  it is you who will have to provide the mental and physical stimulation to keep your pig happy and socially satisfied.

The Complete Guide to Raising Goats For Beginners

Do Pigs Have Sweat Glands and Other Interesting Facts

The 10 Best Farm Animals For Self-Sufficiency

I loved ponies as a child and still delight in their quirky temperaments and can-do attitudes as an adult. I’m not alone. The popularity of various pony breeds has soared during the lockdown,...

Donkeys are intelligent, curious animals. In the wild, they spend most of their time exploring their environment in search of food and companionship.  Domesticated donkeys constantly search their...

We are passionate about farm animals. Collectively, we own horses, donkeys, chickens, ducks, pigs, alpacas, cows, and other animals! We have years of experience. Best Farm Animals is the ultimate resource for learning everything you need to know about your farm animals.