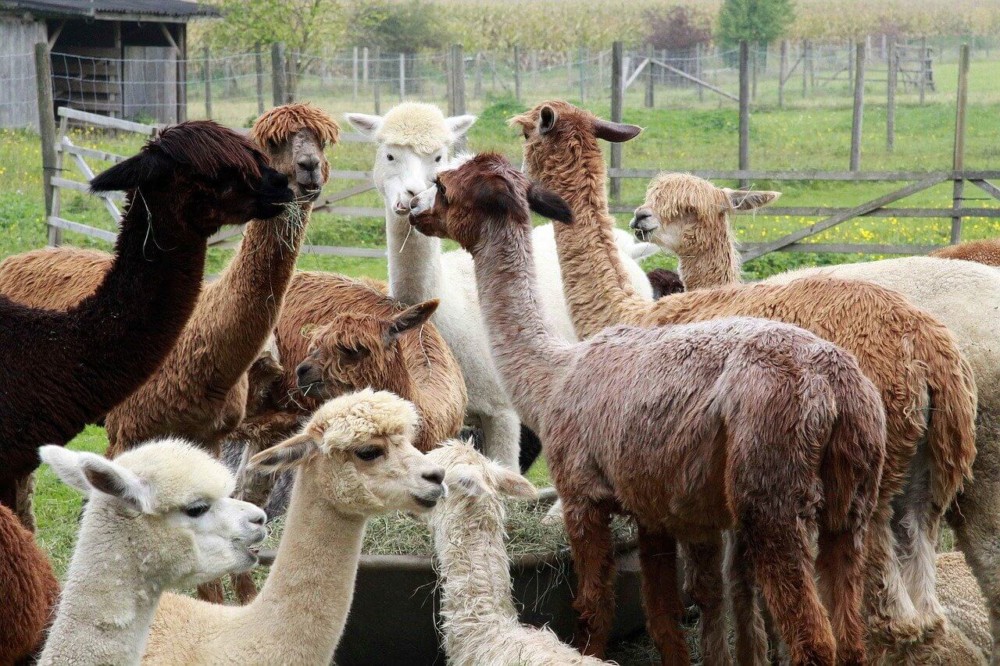 Welcome to part 3 of 3 in this guide covers the states that fall alphabetically between Illinois to North Dakota. You can also click on your state and just to the right section of this guide.

I’ve put together a state-by-state guide to alpaca prices based on the quality of the alpaca, breed, and gender. Feel free to click on the state you’re interested in to skip to that state’s information.

Alpacas make great pets and can bond with their owners. But, as you look to purchase your alpaca, remember that alpacas are herd animals and need companions. This guide to raising alpacas covers food, shelter, and health requirements.

Cost of Alpacas in Ohio For Sale

Ohio alpaca prices vary widely within the state. There are a number of alpacas that are priced at $100 – $250 for pet-quality alpacas. Yet, show alpaca prices go as high as $40,000 for a single alpaca with quality hereditaries. A Huacaya male is the highest priced alpaca in the state.

The Suri Network and Openherd do have alpacas listed for sale in the state.

Cost of Alpacas in Oklahoma For Sale

The price of alpacas in Oklahoma runs average with the rest of the country. Surprisingly, Oklahoma is one of the few states that has more Suri alpacas than Huacaya alpacas. This means a wider price variance than in other states. Alpacas range from $500 to $24,000 per alpaca. An Huacaya female is the highest priced alpaca.

The best place to find listings of Oklahoma alpacas is on the Alpacas of Oklahoma website. TXOLAN doesn’t list any Oklahoma listings. The Suri Network and AOA has limited OK. alpacas listings.

Cost of Alpacas in Oregon For Sale

Cost of Alpacas in Pennsylvania For Sale

There are many Pennsylvania alpacas for sale, which gives a wide variety of prices. Alpacas can be found for only a hundred dollars or up to $30,000 for high-quality show alpacas. Every quality, breed, and gender of alpaca can be found in Pennsylvania.

The Pennsylvania Alpaca Owners & Breeders Association has a great listing of alpaca sales in PA. The Suri Network and AOA also have great listings for Pennsylvania, but it’s harder to sort by state. You’d need to sort by a zip code and miles around that area.

Mid-Atlantic Alpaca Association also has a few PA alpacas listed for sale, but it’s not as comprehensive as the other listings.

Cost of Alpacas in Rhode Island For Sale

The cost of alpacas in Rhode Island can be difficult to determine because of the few farms that are currently selling alpacas. Those price averages vary greatly as individual alpacas are sold or listed for sale.

Rhode Island has about a dozen alpaca farms, but the majority of them serve as a tourist destination, school educational experience, or as a cozy place to stay. Only a few of the farms sell their alpacas.

Neither the AOA or The Suri Network lists any alpaca sales. Nor does the New England Alpaca Owners & Breeders Association.

I couldn’t find any Suri alpacas for sale in Rhode Island, but Huacaya alpacas were listed.

Cost of Alpacas in South Carolina For Sale

South Carolina alpaca prices are influenced by the limited supply of alpacas in the state. S.C. doesn’t have many alpacas for sale. Within the state alpacas are selling for between $250 and $5,000.

The national listings, the AOA and The Suri Network don’t have any SC alpacas. Openherd has the most comprehensive list, but if you are still looking for some additional alpacas, check out these other listings.

Mid-Atlantic Alpaca Association has some alpacas for sale while the Carolina Alpaca Breeders and Owners website has a greater listing. Southeastern Alpaca Association offers information for alpaca owners but doesn’t list alpaca sales.

Cost of Alpacas in South Dakota For Sale

The price of South Dakota alpacas is difficult to verify because the vast majority of them don’t have listed prices. I couldn’t find any prices for female alpacas, either Huacaya or Suris. This could result in future female alpacas being priced above market value and may reflect the demand for female alpacas within the state.

Although the Upper Midwest Alpacas association covers South Dakota, there aren’t any listings on their alpaca sales. The national associations also don’t have any South Dakota sales listed.

Cost of Alpacas in Tennessee For Sale

Tennessee has only a few alpaca farms in the state with alpacas for sale, which makes the prices fairly unstable. Alpacas range in price from $250 to $17,000.

The average price of alpacas in Tennessee depends on which few alpacas are currently for sale.

The national directories don’t list any alpacas in TN for sale. The local association, The Tennessee Alpaca Association doesn’t list alpaca sales so the best place to find alpacas for sale is on individual farm website pages and on Openherd.

Cost of Alpacas in Texas For Sale

The cost of alpacas in Texas ranges from $100 an alpaca to $150,000 for a Huacaya herdsire. As a result, the prices vary quite a bit, but because of the wide variety, alpacas are for sale at almost any price point.

Only Suri female pet quality alpacas weren’t listed for sale in Texas. You can find a number of listings on the AOA and Suri Network websites. You will also find alpacas listed on TXOLAN’s listing and on Openherd.com.

In addition, there are individual farms that have alpacas listed for sale throughout the state of Texas.

Cost of Alpacas in Utah For Sale

Utah has a number of alpaca farms, but many of them are just for tourism or used as petting zoos. The cost of alpacas varies widely from month to month in Utah, depending on the specific alpacas for sale because there are fewer alpacas listed. The highest-priced alpaca listed for sale is priced at a cost of $30,000.

Only a few alpacas are listed on the AOA or the Suri Network’s alpaca listings. Additionally, neither of the local associations, The Alpaca Breeders of the Rockies and Intermountain West Alpaca Association, list any Utah alpacas for sale.

Cost of Alpacas in Vermont For Sale

Vermont has a small number of alpacas listed for sale. This affects the current costs of alpacas. The prices of Vermont alpacas vary from $250 for a pet quality alpaca to $8000 for a female

The highest “rental” for a herdsire is $7500 per breeding, but there are many that are 3-5,000 as well. However, some higher-priced herdsires rent for only $600 so it pays to check all of your options.

Vermont alpaca listings are sparse with a few alpacas listed on the AOA website and the Suri Network. Neither of the local associations, the Empire Alpaca Association or the New England Alpaca Owners & Breeders Association, have Vermont listings.

Cost of Alpacas in Virginia For Sale

Virginia has a couple of hundred alpacas for sale, which means that there are alpacas for sale at almost any price point available in the state. The only alpaca I couldn’t find for sale is a pet male alpaca.

The highest-priced alpaca in Virginia is a female Huacaya, which is selling for $51,000.

Herdsire rentals in Virginia range from $100 per breeding to $5,000 per breeding. Keep that in mind as you see the averages. It does vary widely from location to location and the availability of the herdsire.

Cost of Alpacas in Washington For Sale

The cost for a Washington alpaca varies from only $200 to thousands of dollars. The highest-priced alpacas are selling for $15-16,000. The lowest priced alpacas sell for $200 for pet quality.

Washington alpacas are listed in the AOA listing, the Suri Network, and many local association listings. Local associations include the Alpaca owners, breeders, and enthusiasts for the Pacific Northwest, which has a good variety of WA alpacas. Another great resource is the Columbia Alpaca Breeders Association, which has an extensive listing of alpacas for sale in Washington.

Cost of Alpacas in West Virginia For Sale

One interesting thing is that I found a Suri Herdsire that rents for $15,000 per breeding. That’s more than the highest-priced Suri for sale, which is priced at $8,000. This particular herdsire has won many prestigious awards and is a prized animal.

Cost of Alpacas in Wisconsin For Sale

Wisconsin’s alpaca prices range from $1 to $100,000 for a female Huacaya. There are many alpacas in each category so buyers have decent choices within the state.

The AOA and Suri Network both have Wisconsin alpacas for sale. Additionally, more alpacas can be found on the listings for the Great Lakes Alpaca Association and Upper Midwest Alpacas.

The female Suri average price for show-quality alpacas shows the total average and the average without the 100k alpaca included.

Cost of Alpacas in Wyoming For Sale

The Alpaca Owners Association has some WY alpacas sales listings, but the only place with more than a dozen listings is Openherd.

The Alpacas Breeders of the Rockies has a few listings, but not many. The Suri Network currently has no alpaca listings in Wyoming.

The highest-priced alpaca in Wyoming is a female Huacaya that’s priced at $8,000.

If you are looking for other states, check out my page for states that fall alphabetically between Illinois-North Dakota.

As you can see, alpaca prices vary greatly by each state, the quality, and the breed of the alpacas. Supply and demand is a huge influencer of alpaca prices so in some states, very high-quality alpacas sell for less than in other states.

Take time to visit and inspect the potential alpacas you are considering purchasing. It’s much better to spend a little extra money on checking out an alpaca than to spend thousands of dollars only to find out that you purchased an alpaca that doesn’t fit what you want.

How To Raise Alpacas: A Beginner’s Guide to Owning & Farming

Most Profitable Farm Animals For A Small Farm

What is the Best Animal to Protect Chickens?

link to Can Norwegian Fjord Horses Barrel Race? All About the Breed

Norwegian Fjords are one of the oldest horse breeds in the world. Domesticated some 3000 years ago, the Norwegian Fjord’s sturdy build and calm temperament have seen it excel in almost every...

Continue Reading
link to Should I Keep My Horse Barefoot? Can Horses Support Barefeet

How we keep our horses often depends on the overriding philosophy of the yard they’re living in. If all the other horses in the yard are shod, chances are, you will also shoe your horse. In...