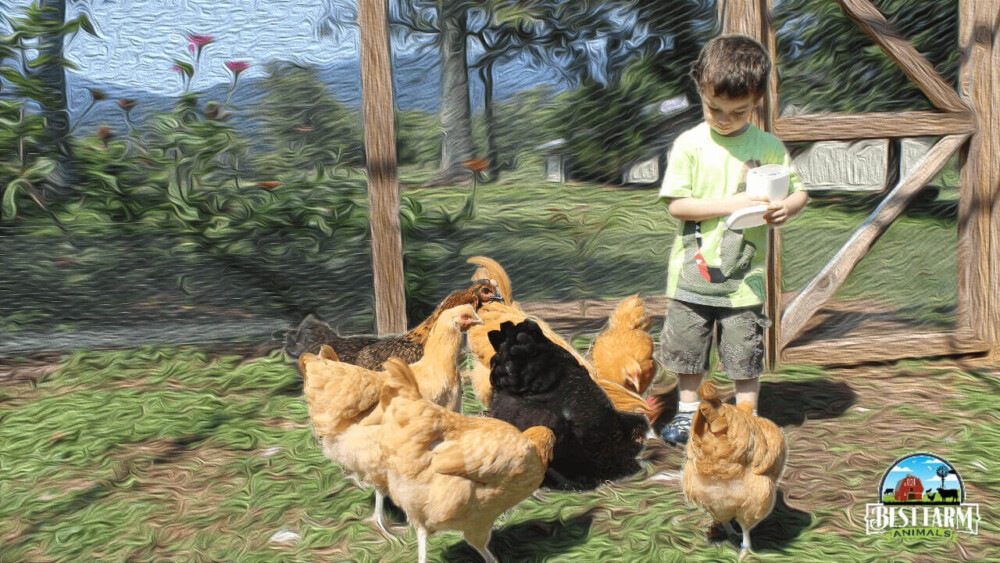 Chickens are becoming a popular farm animal and a popular pet. There are many reasons to have chickens, including yummy eggs. As chickens gain popularity, you may wonder what breed is the best to create a friendly pet.

There are hundreds of chicken breeds, and more varieties are being bred every year. This year, BestFarmAnimals surveyed over 1300 chicken owners to find out which breeds they thought were the friendliest chicken breeds. The results may surprise you, especially since they differ from the usual breeds listed on other websites.

Easter Eggers and Saphire Gems also ranked high on the list, which both surprised me and didn’t surprise me. Neither of those breeds is on the typical “friendly chicken” article, but I’ve experienced their friendliness when we’ve raised them.

Silky chickens received the most votes of any other chicken breed, with over 25% of the votes. Think of that! 1 in 4 chicken owners ranks Silkies as the friendliest chicken breed. That’s really amazing, considering that Silkies aren’t the most purchased chicken breed around. It says a lot that they are so consistently friendly that they won this top spot!

Silkie chickens are so much fun to hug. Their feathers are unusually soft, which is where they get their name. Holding a Silkie chicken is like holding silk!
They look different from most chicken breeds, furry and soft. Kids love them! Silkies originated from China and are also called the Chinese Silk Chicken. They come in a bantam size, but even regular size is smallish.

Silkies are gentle, love cuddles, and often jump on their owner’s laps. They make incredible mothers and will usually adopt any chicks in the flock. They tend to go broody. A few of our Silkie owners warned that their silkies aren’t always as friendly or cuddly during the broody season. They are just too concerned about hatching their eggs!

Silkies lay about 120 eggs yearly or between 3-4 eggs a week. The eggs are small. Some have beards. They have a fifth toe and black skin and bones. Their meat is considered a delicacy in many areas, but most owners can’t imagine eating such a friend! 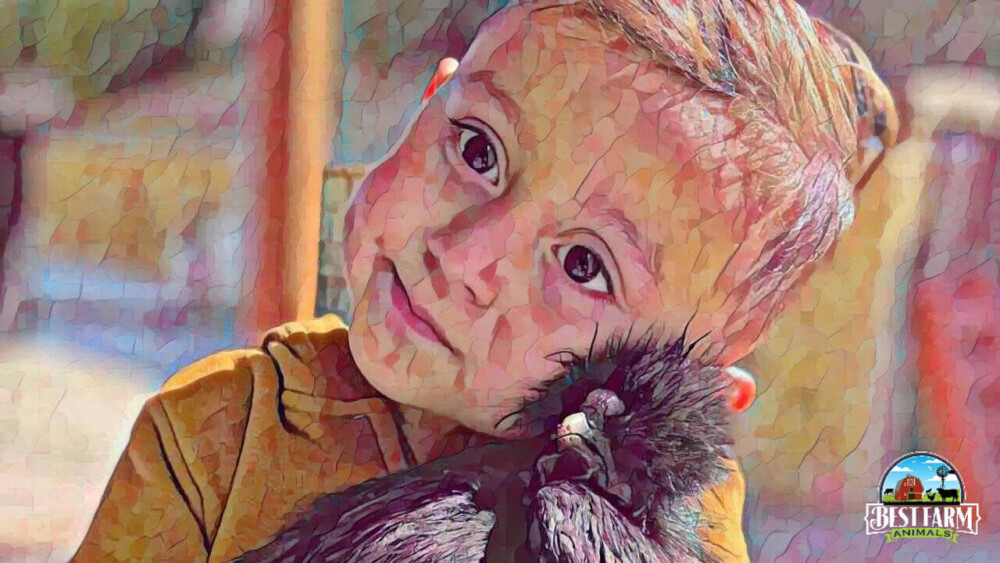 In our survey, Buff Orpingtons were the second most friendly chicken. 21% of all chicken owners voted Buff Orpingtons to be one of the friendliest chicken breeds. Loving and sweet were common descriptions given by owners.

Buff Orpingtons have long been known for being gentle, friendly, and personable with humans. Although, sometimes, they can rule the roost with the flock!

Buff Orpingtons make great mothers and often go broody in the spring. My Buff Orpington has raised eggs from other hens every year. They lay around 280 eggs a year, or an average of 5-6 eggs a week.

Buff Orpingtons love attention, will come running when they see you, and usually love cuddles, jumping on laps, and treats! They make great pets and are usually friendly with kids.

Once in a while, you may find a Buff rooster that’s less patient. It’s important to check out the farm before you adopt a rooster so you can see how the father rooster acts.

Buff Orpingtons are one of the most popular varieties of Orpingtons to find at farms and supply stores.

They are heat and cold tolerant, so they do well in almost any climate. But, they do tend to be a little oblivious or send an air of compliance to other animals. I’ve lost several Buffs while they were broody (and refused to go into the coop) because they refused to leave their nests. 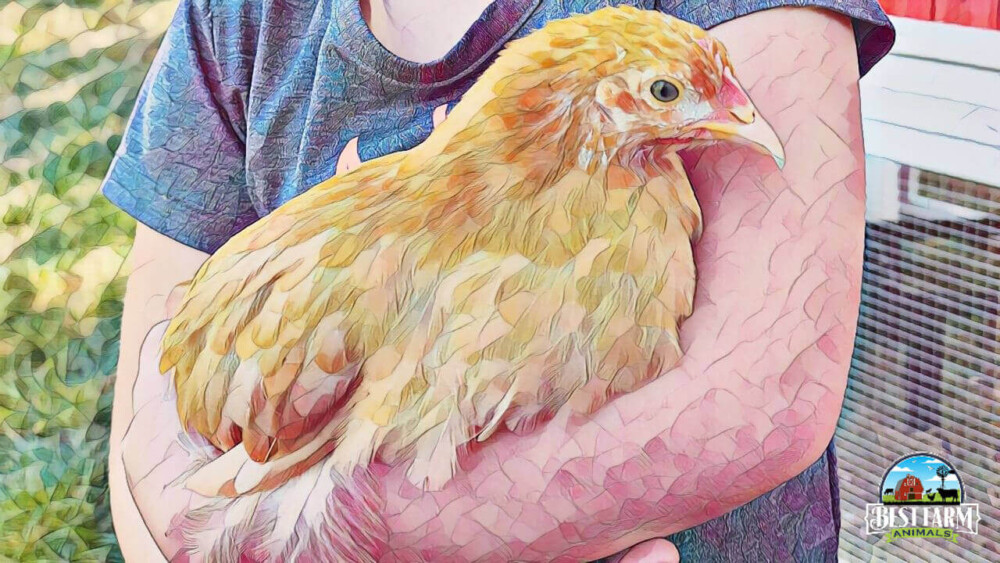 Even friendly breeds can have individuals with different personalities.

Besides, even though they share an Orpington’s last name, the breeds that combined to create a Buff versus a Lavendar Orpington are different, so they are truly two separate breeds. And not all Orpington chickens are friendly. Only these two made the list.

Lavender Orpingtons are relatively new to the chicken world. They are a lovely silvery grey color with a slight purple hue. They are larger chickens with a gentle disposition. Like Buff’s, they love people and can easily make a lap chicken.

Brahma chickens ranked #3 in the top friendliest chicken breeds. They earned 7% of the votes. Owners described their Brahmas as sweet, docile, friendly, tame, and gentle.

Brahma chickens are one of the largest chicken breeds. Maybe because it’s so large, it doesn’t feel the need to compete with the other chickens. As a result, it’s affectionate, easy-going, and super amiable.

Brahmas are raised for both eggs and meat. They are slower-growing birds, so the commercial meat market has passed on them even though they grow larger than other breeds.

They do okay with egg laying as well, about 150 eggs a year, or about 3 eggs a week. They lay most of their eggs from Fall until Spring, so they are great to offset a slowdown of your other birds.

Brahmas grow 2 ½ feet high. Bantam Brahmas are larger than other bantam breeds but still docile and calm. They don’t fly well, so they’ll stay in the coop easier. They have feathered feet, so they’ll need extra attention in wet weather. They do best in warm climates and love to cuddle kids.

In the chicken market, ISA Browns are a newer breed of chicken. A few years ago, they arrived on the scene as mega egg layers that can compete with the Leghorn and Australorpe chickens as heavy egg layers.

But, it was surprising to discover how chummy and pleasant ISA Browns are in a world that breeds egg laying! Our ISA Browns never went after one of the kids but patiently bore hours of handling.

The survey agrees! 143 chicken owners voted that their ISA Browns were their friendliest chicken breed! That’s 6.5% of the survey votes.

ISA Browns lay 300-350 eggs a year. They average 6-7 eggs a day; some birds even lay 2 eggs daily! Pullets lay earlier than most other breeds. Their name comes from the Institute that developed them and their light brown eggs. They look similar to Rhode Island Reds but are much more eager to please people. ISA Brown is a sexlink chicken. Although a wide variety of sex link chickens got a decent number of votes, ISA Browns got more votes than all other sexlink hybrids named.

If you want a heavy egg layer that’s also friendly and pet-quality, check out the ISA Brown. But, be aware that they may have kidney issues from laying so frequently that they often have a shorter lifespan than some other breeds.

The Speckled Sussex is possibly one of the most gorgeous chicken breeds around. They’ve been around for 100s of years and were developed in Sussex, England.

The Romans loved the Sussex hen because of its ready tameness and versatility. They feature a beautiful pattern of colors that’s simply stunning.

But, this breed isn’t just for looks. Speckled Sussex chickens are charming, affable birds. In our survey, they received 5% of the votes. That’s 117 votes for those keeping track! Some of our voters noted that the roosters could get a little aggressive, but the hens are usually friendly.

Speckled Sussex is decent egg layers, laying around 250 eggs a year or 5 eggs a week. They are also raised for meat. They are pretty self-sufficient and don’t need special care during the summer or winter. They are curious, bright, and recovering from steep declines a decade ago. They don’t like flying as much and stay put better.

You’ll find that your Speckled Sussex birds come running when you call, enjoy being petted, and don’t mind a holding. They do well in the cold and forage well.

In our survey, Cochin Chickens received almost 5% of the vote with the 113 votes! Cochin chickens are giant chickens that can weigh upwards of 10+ pounds. They are tamer chickens with a genial personality.

They even get along with smaller chickens without bullying them. Cochin owner after owner described how even their roosters were mellow and friendly to kids.

Cochins are fluffy and do well in the cold but may need extra care during wet conditions. Like the Brahma, they go broody and make great mothers. And, because of their larger size, they don’t get hurt or annoyed by younger kids as easily.

We found the same thing for many other less friendly breeds. It seems that either the super small size of a bantam chicken or the small breeds used to create bantam versions create friendly chickens.

One of the friendlier breeds of bantam chickens is the Sebright. They are beautiful ornamental chickens with lovely lace patterns. The breed has been declining in population recently but is known for its friendly chickens.

Bantams got 4% of the total votes. When you consider the hundreds of chicken breeds voted on, that’s impressive! 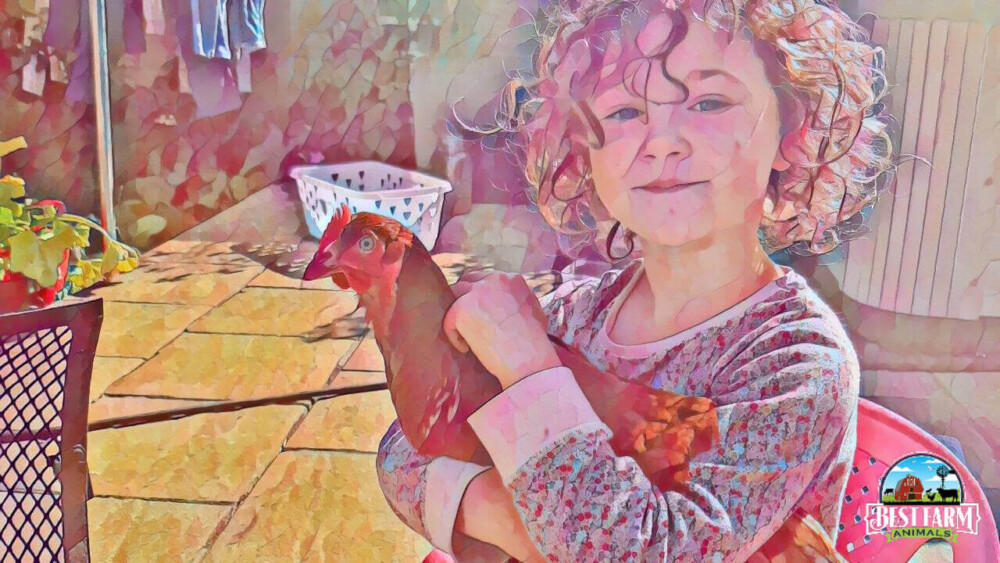 Easter Eggers aren’t an official breed either, but they are sold almost everywhere chickens are sold. Easter Eggers received 4% of the votes.

Easter egger chickens are usually some mix of chicken, including the Ameracauna chicken or Araucana chicken breeds. (Ameracauna is an official breed that’s mixed with the Araucana breed)

The parent breed, the Araucana chicken, is known for being mellow and mild. But, they have a genetic defect that causes large portions of the eggs to die before hatching. As a result, the breed was mixed with other breeds to for the Ameracauna, a hardier chicken.

Pretty much any mix of chicken with Ameracauna chickens is considered Easter Eggers, no matter how little the Ameracauna influence is.

But, that influence is usually strong enough to create a great pet chicken that bonds to human owners. Easter Eggers are fun because they lay a wide variety of colored eggs that range from pink-hued to green and blue. Olive Eggers are usually a mix of easter eggers that lay olive-colored eggs.

Salmon Faverolles received around 2% of the total votes. They are larger chickens that are energetic about life, an energy that creates enthusiastic friends.

Many voters said that the Salmon Faverolles roosters were even friendlier than the hens, and that said a lot! They were consistently described as sweet, friendly, and the best lap chickens.

Salmon Faverolles are a French breed of chicken with a reputation for loving people, even without treats. They are chatty, playful, and inquisitive. Hens are docile and friendly. Roos are loving and cuddly. Owners describe them as clowns. They run into each other and other things but aren’t phased and continue running around.

Salmon Faverolles lay 3-4 eggs a week, or 180-200 eggs a year. They were bred as dual-purpose chickens,s so they grow decently fast and flesh out well. They are low maintenance and tolerate small spaces well.

Other breeds gained a decent amount of votes but were still popular in the survey. (Hey, with 1300 respondents, there are bound to be a LOT of breeds mentioned).

Although these breeds consistently have friendly chickens, all chicken breeds produce individual chickens that are friendly and amicable. Many chickens will train to be lap chickens or will learn to love being held if they are trained well.