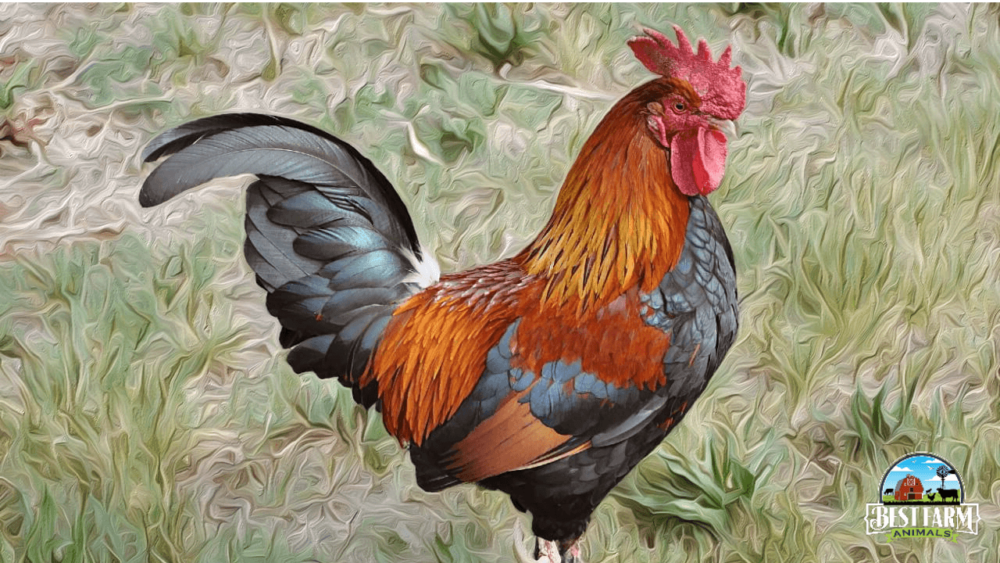 But, roosters can be aggressive. This becomes problematic if you have children around; in some cases, it can be dangerous for kids and adults alike.

This will help you make a good decision when you add a rooster to your flock.

Chickens are still used to defending themselves and have not been domesticated for enough generations to breed a more mellow disposition.

Game breeds are chicken breeds that have been specifically bred for hundreds of years for cockfighting. As a result, the more aggressive roosters have been bred to create aggressive breeds.

Malay chickens were originally brought to England from India and Asia. They were bred to be cockfighting birds and so are generally very aggressive. They are perhaps the most aggressive breed of chickens, although the English Game can compete with them.

Malay roosters are one of the biggest roosters in the world. In addition to being practically all muscle, they are also large. They easily stand 3 feet tall. They have a strong, stout beak and thick legs. This makes them tough in a fight.

Malay roosters are bold and fearless. They can kill or harm chicks as they are not very friendly toward smaller chickens. They need plenty of space and can be aggressive toward other chickens, animals, and people.
It’s not uncommon for a Malay rooster to attack a cat or take on a dog. They literally have no fear of predators.

But, don’t let this beautiful bird fool you. Roosters and hens are very aggressive and will not play nicely with other breeds of chickens. They should be kept separate from other chickens. Roosters won’t tolerate other roosters in the area and will fight until the other rooster leaves or dies.

If you raise Old English Game chickens, make sure to allow them plenty of space. They don’t coop up very well. The mothers are great and protective moms and will hatch their own eggs. 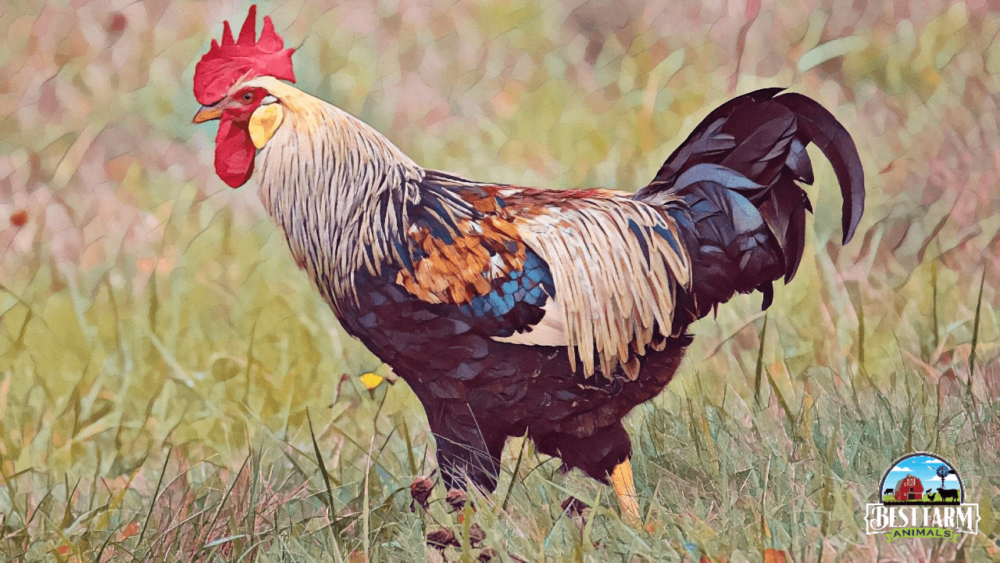 They are very muscular birds with a big attitude. They are aggressive, although the hens aren’t as aggressive as the roosters. They need plenty of space and should be combined in flocks with other roosters.

Chicks tend to be more aggressive than chicks from other breeds. You may notice feather pulling at only a couple of days old. They are also more likely to start cannibalism at a young age.

Asil chickens are the meanest chicken breed. Asil chickens were bred for cockfighting and are extremely territorial. Asil roosters are often called the “most fighting chicken in the world.” The roosters are very territorial. They should not be combined in flocks with other breeds. Chicks often start fighting before they reach a week old. Cocks should be separated by 3 months of age to prevent to-the-death fights.

The Asil is stubborn, majestic, and has high stamina. The roosters will outlast most any threat that presents itself- that includes you!

Asil chickens originated in India and were brought to Europe for the purpose of cockfighting. Centuries before they were introduced in Europe, they were bred in India for cockfighting so their aggressive nature is thousands of years old.

Asil chickens should not be cooped up or kept in small places. They also do poorly in colder weather. There are several varieties of Asil chickens. Asil chickens also spelled Aseel or Asli, are aggressive, fighting chickens.

Roosters and hens can be aggressive and aren’t a great breed for new chicken owners, although they can be trained to be more mellow with experience.

Modern Game roosters will fight other roosters to the death and shouldn’t be allowed or kept with other roosters. This usually happens even when cocks are raised from hatchlings together. Once the hormones kick in- it’s fighting time.

They are very active roosters and require adequate space. They don’t do well in confinement but prefer to free-range.

Modern Game chickens originate from a combination of Old English Game and Malay heritage. They are great show birds because of how colorful and bright their appearance is. They weren’t bred as a game bird, but still have much of the aggression of their ancestors inherent in the roosters and hens. They aren’t as aggressive as either Malay or Old English Game but are still considered a more aggressive breed. 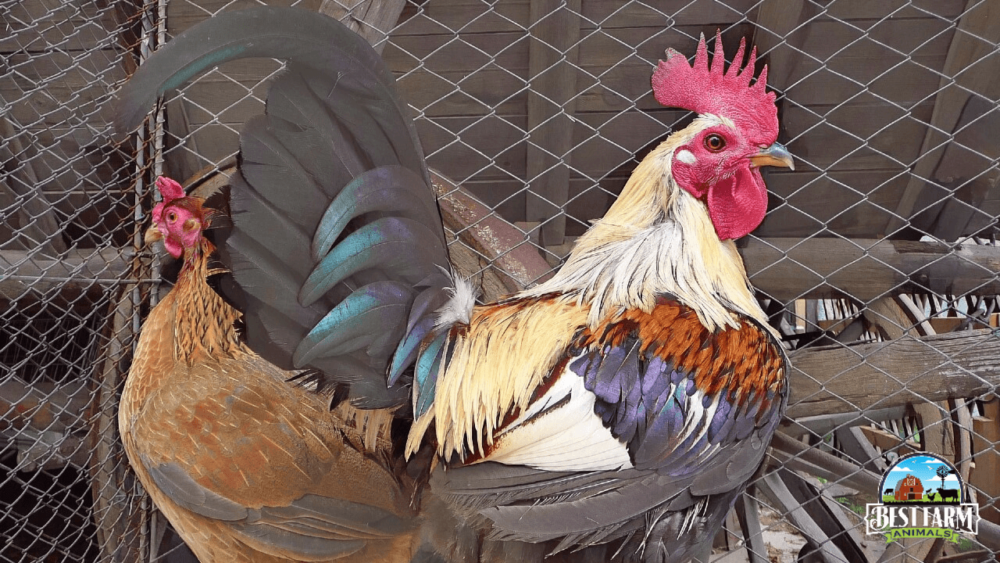 American game chickens were bred for cockfighting. They are a territorial, aggressive bird. Both roosters and hens can be aggressive and should be kept from other varieties of chickens. This breed is a noisy chicken breed.

American Game is a more wild bird. They fly easier than other breeds like to roost in trees, and love free-ranging, although it can be hard to find the eggs.

American Game hens will bully new hens and don’t like newbies in the flock.

Although American Game is more aggressive, the roosters tend to be good fathers and aren’t as aggressive toward their own young.

American Game chickens have a rich history and were the breed that George Washington, Thomas Jefferson and Abraham Lincoln raised.

American Game chickens are raised mainly as ornamental birds and come in nearly any color combination. They have long beautifully colored feathers and do well at chicken shows.

American Game has many varieties including the nicknames Roundheads, Sweaters, Marsh Butchers, Bumblefoot Grey, and Whitehackles. All of these nicknames refer to a specific strain or coloring of American Game chickens.

They are possibly the most ancient of all breeds and the breed closest to the original wild chicken that was first domesticated thousands of years ago.

As a result, Oriental Game chickens still have the fight to live instinct and are very wild. They fly well, roost in trees, and aren’t afraid to fight to the death.

However, many of these breeds of chickens are rare and fighting extinction.

Oriental Fowls are fierce and chicks will often fight immediately upon hatching. Even hens are aggressive, although they often mellow with age. The hens are great mothers and do well hatching and raising their young.

Cocks should be kept separate as they will continually fight to the death. These athletic birds are very adept at taking care of themselves. They are muscular with thick, widespread legs. They are a cousin to the Asil Chicken.

Other varieties of Oriental Fowl include: 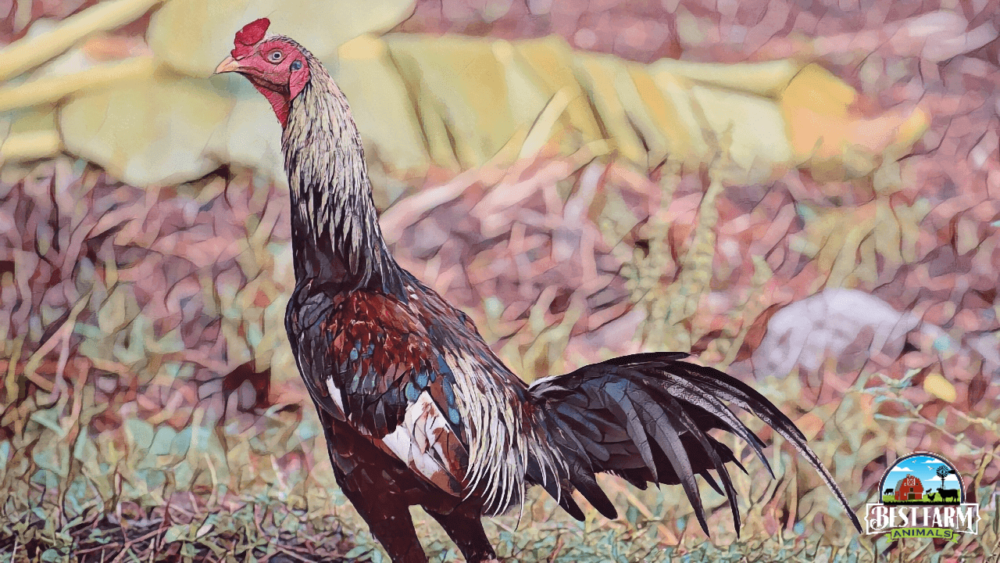 Egg-Laying Chickens Are Not Usually Mean

Are Australorp Roosters Aggressive? Australorp chickens are one of the most mellow chicken breeds around. Even the roosters tend to be friendly and non-aggressive. If mixed with other breeds, Australorp hens will generally be at the bottom of the pecking order and the roosters generally submit to other rooster breeds.

Are Leghorn Roosters Aggressive? Leghorns are one of the most aggressive roosters of the egg-laying chicken breeds. They are aggressive to other chicken breeds and can be mean to children. Leghorn hens develop larger wattles, and the roosters have large wattles and leg spurs that make an attack more painful. Even when gently raised from chicks, leghorn chickens will remain standoffish.

Are Polish Roosters Aggressive? Polish chickens are never aggressive unless they have been very poorly treated; even then, they are more likely to run than to fight. They have an adorable tuft that makes it harder for them to see and respond to danger. As a result, the chickens tend to be less aggressive toward other chickens and are often the bullied chickens in a mixed flock. At the same time, the lack of peripheral vision can make roosters jumpy and nervous. This can occasionally translate into more skittish behavior but rarely aggressive behavior.

Are Bantam Roosters Aggressive? Most breeds of bantam chickens are not aggressive. Because of their smaller size, roosters are generally sweet and friendly. This can change a little during the mating seasons but won’t generally result in high aggression. In some cases, bantam rooster mixes can inherit meaner traits that cause them to pick on small children when they turn their backs on the rooster. It’s sort of the equivalent of “little man” syndrome in a rooster.

Are Brahma Roosters Aggressive? Brahma chickens are not aggressive or mean. They are considered one of the calmest chicken breeds around. Even Brahma roosters have often been nicknamed “the gentle giant” because they have such calm, sweet personalities. Even though they are very large chickens, the roosters are usually mellow and friendly.

Are Serama Roosters Aggressive? Serama chickens are are rarely aggressive chickens, although the roosters may occasionally become aggressive with people. The smallest chicken breed in the world are usually calm and mellow chickens. In a mixed flock, Serama hens are often picked on by other breeds.

Keep roosters separated unless they are raised together and even so, watch for signs of fighting and aggression once the roos reach puberty at 4 or 5 months of age.

You may also find these related rooster articles helpful.

Are Roosters Aggressive To Hens? Identify and Curb Meanness

How To Identify And Stop Chicken Flock Bullying

How To Provide Entertainment To Chickens. Stop Bullying!