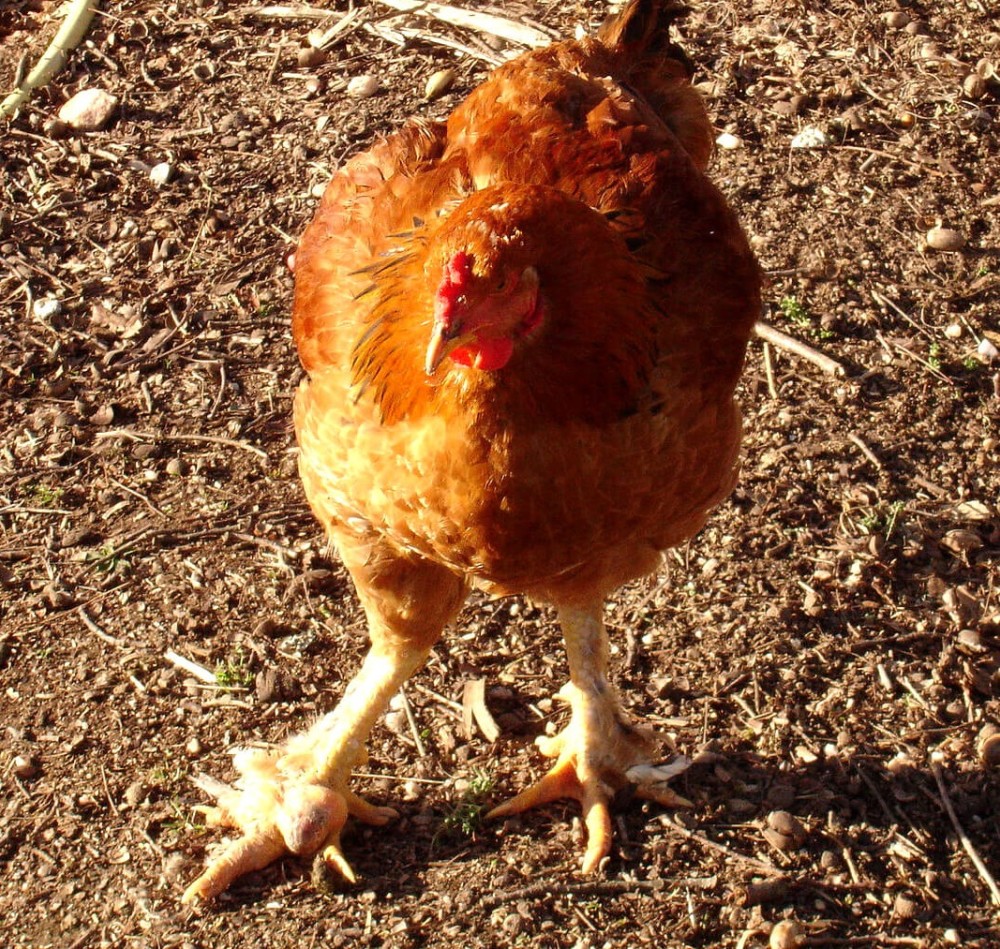 A broken leg isn’t the only cause of a chicken’s limping or refusing to use its leg. Infection, disease, genetic defects and mites can also cause a chicken to favor one leg over another.
Let’s cover each of these and cures or treatments.

Each leg issue has a separate treatment and diagnosis.

This is the final section on one-legged chickens and lame chicken causes and cures. In Part 1, I covered how you can assess whether or not your chicken will survive with a single leg. In Part 2, I covered measures you can take to help your chicken recover including how to splinter a broken leg and how to amputate a chicken leg.

In this section, I’ll cover the common infections, diseases, and injuries that cause lameness in chickens. I’ll cover how to prevent and protect your chickens from these causes.

Bumblefoot is an abscess in the footpad that causes lameness. It usually occurs when the foot is cut or injured from a hard surface. Chickens that live on concrete, hardware cloth, or have especially high perches are in danger of bumblefoot.

An overweight chicken that jumps off a high perch can damage their foot and cause bumblefoot.

Other causes of bumblefoot include gravel surfaces or hard ground with weed stubble. Consistently wet ground or mud can cause the chickens’ feet to crack and also cause bumblefoot.

If your flock has frequent occurrences of bumblefoot, then it is likely caused by their living conditions.

The earlier you catch and treat bumblefoot, the easier recovery is. The staph bacteria will grow and worsen inside the foot and eventually need to be removed if not treated early.

This can be a scary procedure to do and if you can find a vet willing to do it, that’s your best option. But, most vets don’t treat chickens so it’s hard to find someone who’s qualified to help.

Without treatment, bumblefoot causes death half the time. So, it’s important to treat it as soon as possible.

Also called Staph, staphylococcus causes bumblefoot in chickens. It is the most frequent infection that chickens get.

It is caused by chickens drinking stagnant rainwater or getting infected from a wound. The birds become listless and usually stop laying eggs.

You may also notice watery, smelly diarrhea and swollen joints in your chickens.

Staphylococcus can be passed to the egg. This sometimes causes black egg rot in the eggs. Eggs from infected chickens should not be consumed.

Staph can be treated successfully with antibiotics. As of 2017, nearly all antibiotics approved for use in birds became restricted in the USA without a vet’s approval.

As a result, you may need to get the antibiotics from a vet.

In the absence of an antibiotic, you can help your chicken by providing the best tools available. Feed them balanced feed. Add a TBS to their watering dish to help prevent further infection. You can also provide them additional electrolytes by giving them Gatorade or Pedialyte.

Mycoplasma synoviae (MS) is highly contagious. If one of your birds gets it, then the entire flock usually becomes infected, although only a few birds may exhibit symptoms.

Early identification and isolation is critical.

MS doesn’t affect people but can affect other species of birds. Infection occurs when a chicken is directly exposed to the infection by another chicken.

Symptoms of mycoplasma synoviae include:

The only way to accurately diagnose MS is to do a blood test or test the infected site for the pathogen.

Treating MS In A Chicken Flock

Most chickens with Mycoplasma Synoviae won’t show signs, even if they are infected. If you have a chicken showing symptoms of MS, try to isolate it as soon as possible to stop the spread of the illness.

It may be possible that your flock is already infected. If that is the case, there are steps you can take to reduce the symptoms in your flock. MS is not transmittable to people, so chickens with MS do not need to be culled.

Mareks disease is a virus that can cause your chickens to become lame, fall over as if they are drunk, or have wing issues. Marek’s disease is easily spread from chicken to chicken and can be transmitted vía your clothing, the wind, or direct contact.

Some common symptoms of Marek’s disease include:

Positive identification of Merek’s disease is difficult. If you suspect Merek’s disease, think whether you introduced new chickens to your flock in the last few months. Have your chickens had exposure to other chickens?

Merek’s is highly contagious so even exposure to other chickens for a few days can spread the disease. Have your chicken sat for a friend lately?

There are other things, such as a vitamin deficiency that causes some of the same symptoms as Merek’s disease.

But, there is no treatment or cure for Marek’s disease.

Other things that can mirror Marek’s disease include:

If the only symptom is lameness or limping in your chicken, then I’d check first for injury, and second treat the chicken for a vitamin deficiency.

Fungal foot issues are usually caused by poor water conditions or by dirty bedding or consistent mud. Chickens should never drink from green or mossy water. Water should be clear and clean.

But that’s not all.

Consistent mud or wet bedding can also cause fungal issues in chicken feet and legs. Chickens need a dry surface to walk around on. The leg skin is thin and delicate.

It rots easily when exposed to consistent moisture.

If you live in an area that has consistent rain, you will need to take steps to provide dry areas for your chickens. Raise the flooring of their coop so the water can drain out, cover walkways, or add stray or hay to the coop.

Identify and Treat Mites in Chicken

There are two types of mites that tend to affect chickens: red mites and a parasitic mite called cnemidocoptes. The symptoms and treatment for each type of mite vary slightly.

Hang a white cloth in your coop. Some of the mites will climb onto the cloth, because it looks like a chicken. In the morning you will see small grey or red dots on the cloth.

You can kill mites with a bug bomb (don’t have the chickens nearby when you do this). You can also treat mites with Diatomaceous Earth (DE) sprinkled in the coop.

Lastly, apply vaseline to your chicken’s legs to keep the mites from reaching the chicken’s body and feasting on their blood.

Although red mites are more commonly found in chickens, most people are familiar with the common mite that causes scaly legs in chickens.

Cnemidocoptes mites, also called the Scaly leg mite,  burrow deep into your chickens’ legs and cause their legs to become scaly and sickly looking. This can cause lameness in chickens as the legs will hurt and discomfort.

There are several things you can do to treat mites and scaly legs in chickens.

Chickens can also be injured from improper equipment. Chickens who live on mesh floors that are spaced too far apart can be cut and injured from the wire.

Slippery floors and ramps can also cause foot and leg injury. Sharp objects can cut feet and cause injury.

Another cause of injury can be perches that are higher than 2 feet off the ground. Chickens love to perch high and will compete for the highest perch. But, high perches can cause foot and leg injury when they jump off the perch.

This happens if feed was exposed to heat, is old, or has gone through another process that will diminish the effectiveness of the vitamins or nutrients to your chickens.

Free-range chickens are less likely to have a vitamin or mineral deficiency than cooped up chickens.

The best way to identify a nutritional deficiency is to treat for it and watch for your chickens to get better. Feed chickens a vitamin supplement. You might also try changing the brand of feed to see if that helps.

I had a chicken that was deficient in Vitamin E. It couldn’t stand up or hold it’s neck up. After 4 days of feeding it from a Vitamin E capsule, we noticed a marked improvement and by day 5, the chicken was back to normal.

A splayed legs usually occur when a chick or chicken walks on a slippery surface. Their legs do the splits and this weakens the muscles around the legs. It can also cause the leg of the chick to come out of the joint.

A splayed leg keeps a chicken from walking because the leg goes out at an angle behind the chicken and can’t support the weight.

You can treat spraddle legs by creating a leg sling to support the hurt leg.

Check the chicken after 2 weeks without the sling to check if it is walking with both legs again. The younger the bird is, the more likely the leg will recover.

There are several types of deformities that can be found in chickens that cause leg and foot issues.

Cornish Cross chickens have weaker skeletal structures and short lifespans. Even if they are not butchered, which is the usual purpose of raising these birds, they usually have heart issues, liver and kidney issues, and don’t live more than 1-2 years at the most.

Other genetic issues can be specific to the chick. Inbreeding causes genetic issues. Additionally, uneven temperatures while the egg is incubating causes deformities in chicks.

Gout is a sign of a kidney malfunction. It causes arthritis in the joints of the chicken. This affects the wings, feet, and legs of the chicken and can cause lameness.

Gout can be caused by hereditary issues, but can also be caused by a diet that’s too high in protein. Gout does not spread among the flock but affects individual chickens.

It is more common in roosters than in hens. Gout seldom strikes before a chicken is at least 4 months old.

It can also be caused by not enough water, moldy food, too high of calcium fed to pullets, and an electrolyte overdose or deficiency. Feeding your chickens baking soda in water over a prolonged time can also cause gout.

There are several ways to help prevent gout in chickens:

Can Chicken Break Their Toes? Chickens can break their toes. This can happen if chickens are accidentally stepped on, or if their feet get caught in chicken wire. Chicken toes can be splintered much the same as a chicken leg is splintered. Watch the injured toe for torn or cut skin and apply an antibiotic cream to the foot under the splinter.

What Causes Chickens to Limp? Chickens will limp from an injured or cut foot, scaly leg, gout, and a vitamin deficiency. Broken legs usually cause chickens to completely avoid using the leg. Limping is usually a good sign because it means that the leg isn’t as injured as if the chicken refuses to use it.

Info on antibiotics for chickens in the USA