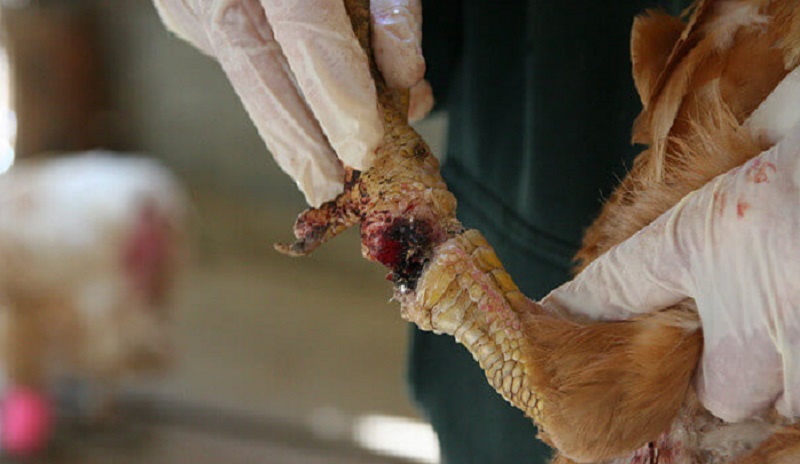 Many things can cause a chicken to lose a leg. Sometimes the cause is so traumatic, such as a predator attack, that the chicken dies from the shock or blood loss. But, other causes can often be treated and after the first two critical weeks have passed, you can feel more confident that your chicken will survive.

Welcome to part 2 of my guide on caring for chickens with a single leg or a leg injury, infection, or break. In the last section, I covered survival factors for chickens with one leg to help you decide on the next course of action.

In this section, I’ll be covering the causes of a lame, broken or injured leg and solutions to help the chicken survive. In Part 3, I cover infections, diseases, nutritional causes, and other causes of lame chicken legs.

There are many causes of a leg loss for a chicken including:

Hatched Chicks With A Single Leg

Often chicks deformities occur when fertilized eggs are held for more than 3-4 days before they are incubated. This happens with the hatchery holds eggs to space out chick hatchlings evenly.

It can also happen if a fertilized egg is left out without being incubated or kept warm by a brooding hen.

It causes a much greater rate of deformity in hatching chicks. Often a lame leg is a sign of other bone deformities or other internal issues in the chick that will signal an inability to survive.

When a chick hatches with one leg, or only using one leg, watch it carefully. Within 1-2 weeks, you will notice one of three things happening.

It can be especially heartbreaking to watch a chick that’s struggling to survive. We have had many tears at my house for chicks that get sick or die.

Sometimes it is more merciful to cull the chick and save it the suffering of slowly starving to death.

But, if you just can’t bring yourself to do that, there are some steps you can take to help increase the chances of your chick surviving.

Increase Your Chick’s Chances Of Survival With A Single Leg

First, if your chick seems alert and otherwise healthy, but has a splayed leg that is angled wrong, you can splinter it.

Baby chicks have a low success rate with wrongly angled legs and other leg issues. Often this is a sign of a much more serious condition.

Sometimes, the chick just has a sprained leg or foot and will recover within a few days. This is your chick’s best chance of survival. To help it survive, there are a few actions you can take.

None of these steps will guarantee that your chick will survive. In many cases, it is more merciful to cull, or terminate the chick’s life. Some signs that your chick isn’t likely to survive include:

Sadly, if you see any of these signs, it’s nearly guaranteed that your chick will not survive. At this point, you have two choices: continue to nurse it back to health, or mercifully end its life.

I haven’t ever been able to actually kill a chick so I have to admit that I always try to save the chicks life. And, I’ve seen a few amazing recoveries to fully healthy chicks.

But, I’ve also seen chicks die. I can understand others who don’t want the chick to suffer needlessly and decide to cull it instead of making it suffer.

It’s a choice only you can make.

What To Do If Your Chicken Breaks Its Leg

Sometimes it’s not obvious if your chicken has a broken leg or another hurt foot issue. There are a number of leg and foot issues in poultry that can cause a chicken to limp, use only one leg, or favor a leg.

If you suspect that your chicken has broken one of it’s legs or feet, you will need to do a physical inspection of the leg to identify a break or protruding bones..

The only way to diagnose a broken leg in a chicken is to visually identify that the bone has broken. Chickens will usually refuse to put any weight on a broken leg.

If your chicken is limping, then it’s likely another injury.

How To Treat A Chicken’s Broken Leg

Chickens can heal from a broken leg if the injury is not too severe and if the chicken is in good health. Chickens can have a good quality of life, even with a broken leg, but several factors make a difference.

If the leg is broken above the joint, many issues can arise that prevent the chicken from healing. A leg may be torn off by a predator and the increased bleeding can cause the chicken to die.

Chicken legs bleed more above the joint than below. Circulation is better and so infections and other issues with the leg are more likely to travel and affect the rest of the body.

If the break is above the joint, it’s more likely that the chicken will get blood poisoning and die, although this can take a few weeks to occur.

It is critical that you treat an infected leg and try to prevent the spread of infection. You can do this by amputating the dead and rotting portions of the leg. You can cauterize constantly bleeding legs.

At a minimum, use hydrogen peroxide, triple antibiotic, or a poultry antibiotic. It may also be a good idea to feed your chicken medicated chicken feed while the injury heals. Medicated feed is fortified to help prevent illnesses within chickens.

How to Splint A Chicken’s Broken Leg

If the leg is broken below the joint, then the viability for it to heal is better. You will need to splinter the broken leg with cut down tongue depressor or popsicle sticks on opposite sides of the leg to keep it from moving.

Splinting will also allow the chicken to put weight on it as the leg heals without causing it to break again.

Will a chickens broken leg heal? If the chicken’s beak is below the “knee” joint and is a clean break, it will most likely heal with the help of a splint. If the break is above the joint or is a compound break, it is unlikely to heal. Chickens have hollow bones so broken bones often shatter instead of a clean break. The older the chicken is, the more likely it is that the bone shatters and that the chicken loses part of its leg.

How To Amputate a Chicken’s Leg

In some cases, a leg may become infected, start to rot, and appear completely dead. If this happens the chicken can get blood poisoning or gangrene from the infected leg. The best action is to amputate the leg.

Ideally, you can find a vet or experienced chicken owner to do the amputation.

But, if you can’t you may have to do it yourself. (Disclosure: I have never had to amputate a chicken’s leg myself)

Hopefully, this section was helpful. In the next section of this guide, I will cover common infections, parasites, hereditary diseases, and other factors that lead to lame chickens.