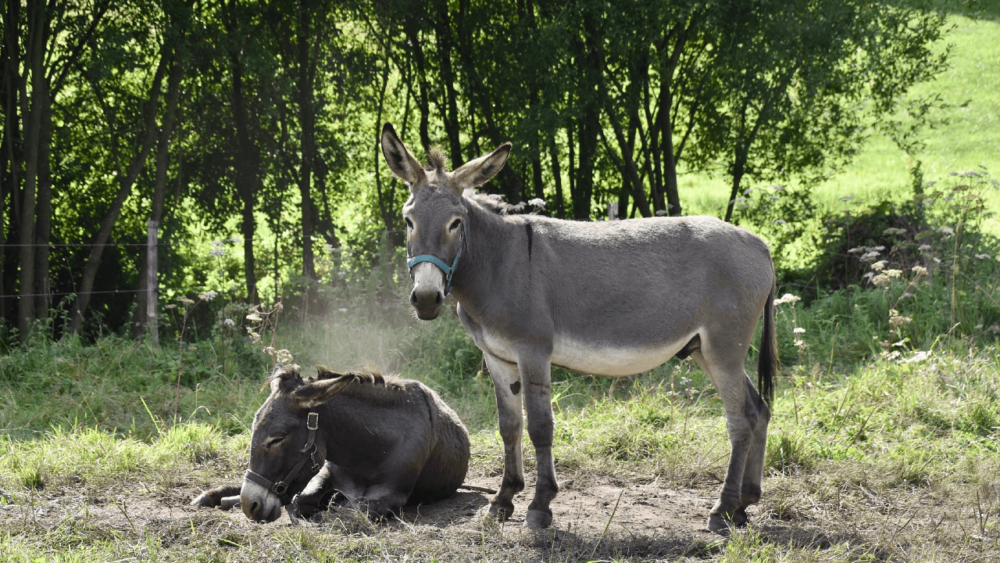 Donkeys are stoic animals with an insensitive cough reflex. They are rarely trained or worked as intensively as horses. As a result of these factors, a donkey may suffer from a respiratory condition for months without its owner noticing. Respiratory illnesses, therefore, often go unnoticed until they reach a more severe or chronic state.

When to worry about a donkey coughing? It takes a lot of irritation of the throat and lungs before a donkey will start coughing, so you should thoroughly investigate any rasp, wheeze, or bark. A cough accompanied by nasal discharge or a fever of over 37.1℃ could mean your donkey has picked up a viral or bacterial infection.

9 Conditions That Cause a Donkey To Cough

#1 Allergies can Cause a Donkey to Cough and Sneeze

Some donkeys are more susceptible to allergies than others. A miniature donkey at the Woodland Park Zoo in Seattle, for example, is allergic to certain types of hay. The zoo’s caregivers have switched the donkey from Timothy to Bermuda hay to control his symptoms. They also administer routine allergen immunotherapy treatments.

This type of allergy is relatively rare. Donkeys are more susceptible to airborne allergens, such as:

Donkeys with this condition develop breathing difficulties, such as coughing and wheezing. Some donkeys may develop a chronic allergic respiratory disorder and will need careful management to control the problem.

A donkey with an allergic respiratory disorder needs a dust-free environment, which could mean changing the type of bedding you use and soaking his hay before feeding.

#2 A Coughing Donkey may have Strangles

Strangles is a highly contagious respiratory infection caused by the Streptococcus equi bacterium. A donkey with strangles displays the same symptoms as a horse. These include:

Although potentially fatal, most donkeys make a full recovery and require little treatment beyond rest and supportive care. A veterinarian may also prescribe antibiotics, but around 75% of donkeys recover naturally and develop long-term immunity to the infection as a result. 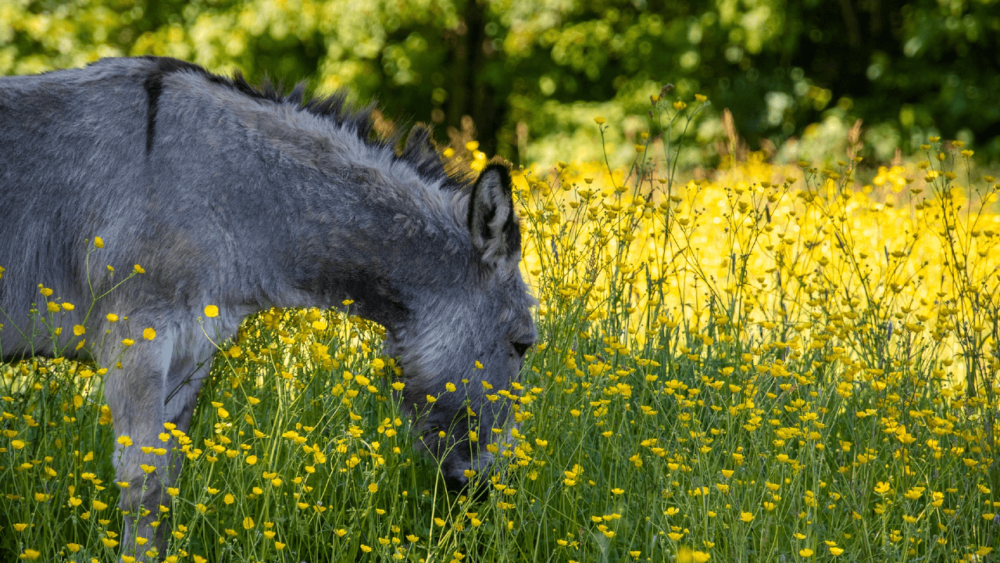 The first case of equine influenza in a donkey was reported in 1874. Since then, numerous outbreaks and trials show that donkeys experience more pronounced clinical signs than horses and higher mortality.

As this disease appears more severe in donkeys, owners are encouraged to vaccinate against equine influenza every year.

Signs that your donkey has equine influenza include:

While most donkeys will recover from a bout of equine flu with supportive care and rest, they are more susceptible to secondary infections than horses. Donkeys with a concurrent lungworm infection are at high risk of developing secondary bacterial bronchopneumonia.

#4 Identifying a Lungworm Infestation in a Donkey

One of our dogs nearly died of a lungworm infestation due to our ignorance and late diagnosis. Diagnosing lungworm disease in a donkey is similarly problematic.

Donkeys rarely show any clinical signs, even when carrying a significant lungworm burden. The lungworm capitalizes on this and grows to full maturity inside the donkey. This parasitic process seems to have little effect on the donkey, and it’s only when their immune system is compromised that they may show symptoms.

The signs of a lungworm infestation include:

A veterinarian can diagnose lungworm by performing a fecal egg count. Fortunately, the condition is easily treatable, and a single dose of ivermectin is usually all that’s needed.

Scientists have identified nine different herpesviruses in horses and donkeys, each of which causes a different range of symptoms. The two most common types, Equine Herpes Virus 1 (EHV 1) and EHV 4 can cause respiratory disease, among other symptoms.

EHV 1 can be fatal to both donkeys and horses, but many survive. Some studies suggest that older donkeys have more antibodies against the virus because they’ve fought against it so many times. They have, in effect, built up natural immunity.

EHV symptoms are very similar to those associated with Equine Influenza and include coughing, nasal discharge, and a fever. Treatment involves rest and anti-inflammatories. A vet may also prescribe antibiotics should a secondary bacterial infection occur.

Although tracheal disease is uncommon in donkeys, as they get older, the cartilage of the Rachael rings becomes brittle. Donkeys live for up to 50 years, so they are more prone to geriatric conditions such as this than other equines.

A donkey with tracheal disease may start breathing through his mouth and develop a chronic, honking cough, along with labored breathing.

Anti-inflammatories can treat a mild case of tracheal collapse, but euthanasia is often the only option in chronic cases. 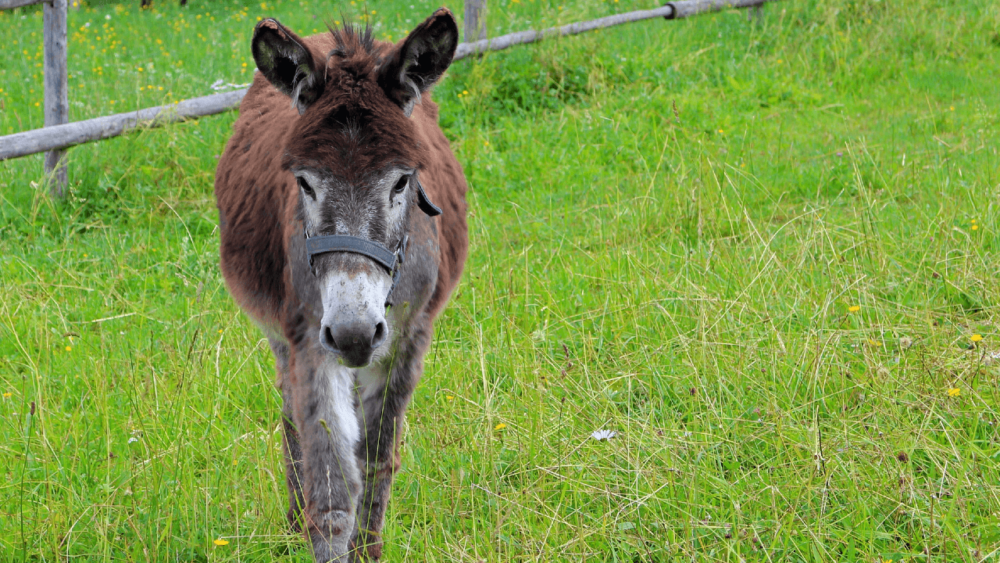 Pulmonary fibrosis is a common finding in post-mortems performed on donkeys in the UK, although it’s rarely the primary cause of death.

While pulmonary fibrosis is a terminal illness in humans, it seems relatively benign in the donkey. It is, nevertheless, one of the most common respiratory diseases amongst geriatric donkeys.

This respiratory condition is difficult to diagnose as, in most instances, the donkey has a normal appetite and remains bright and alert. However, a donkey that drops his head and flares his nostrils is suffering from acute pulmonary fibrosis that could prove fatal.

According to a study of 1,444 senior donkeys, sinusitis affected just 0.8%.

Sinusitis is relatively common in horses, resulting from upper respiratory bacterial infections. However, in donkeys, it seems to occur only later in life and is more commonly associated with dental disorders and fungal infections.

A study of donkeys at the UK’s Donkey Sanctuary concluded that extracting any damaged or infected teeth and flushing the affected sinus would help to combat the infection. 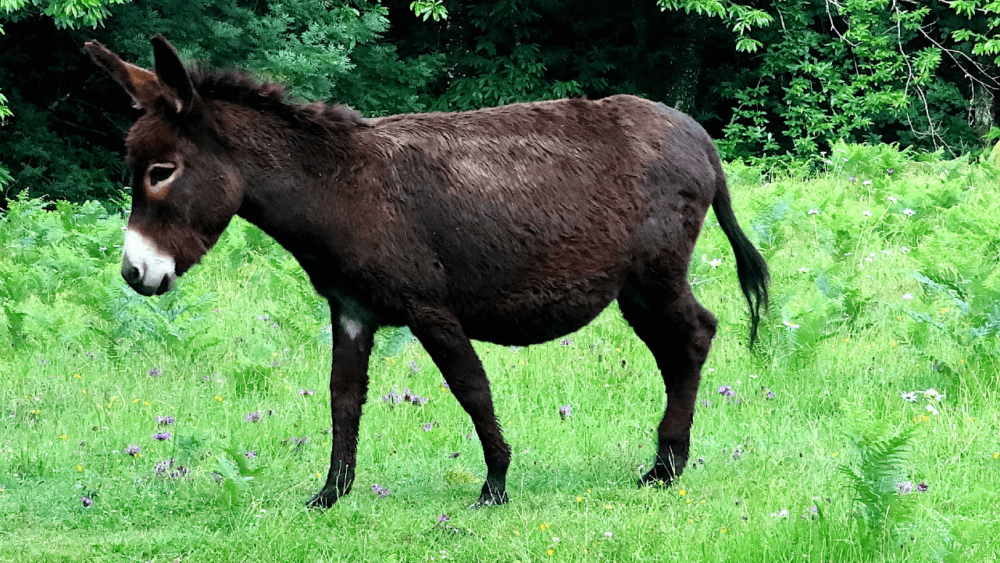 #9 Pneumonia is an Unlikely Cause of Donkey Coughing

Donkeys rarely suffer from pneumonia, even though it’s a common problem for goats. A coughing donkey is more likely to have an allergy, bacterial or viral infection, or heavy parasitic burden.

Chart of Issues that Cause Donkey Coughing

How to Prevent Coughing in Donkeys

Preventing health problems in donkeys is often easier than curing them. The following tips will help keep your donkey in the best condition and reduce the risk of him developing a cough or other respiratory issues.

Any shelters should be well-ventilated yet draught-free. A poorly ventilated stable quickly gets damp and dusty, irritating your donkey’s airways.

Many people feed horses with respiratory problems hay that’s been soaked or steamed. Donkeys are often reluctant to eat this. Naturally dust-free, high-fiber haylage is a suitable alternative, as is straw-based chaff.

Keep bacteria and fungi at bay by cleaning and disinfecting your donkey’s shelter every week or two. To do this effectively, remove all bedding and stable fittings. Sweep the walls and floors before using a hose to rinse them down. Scrub the enclosure with a disinfectant and then leave to dry.

5. Vaccinate your Donkey against Equine Influenza

To keep your donkey healthy and minimize the risk of infection, vaccinate him annually against equine influenza.

Donkeys should be dewormed every six to eight weeks unless you perform a worm count that indicates otherwise. The best dewormers for donkeys are broad-spectrum products, such as moxidectin and ivermectin, which are effective for treating and preventing lungworms.

If you have the space, rotate your donkeys onto a new pasture or paddock every 4 to 6 weeks to break up the parasites’ life cycle. If that’s not an option, pick up droppings from your paddock regularly to control the size and distribution of its parasitic load.

Dusty or moldy hay contains all kinds of particles that can irritate your donkey’s airways, causing him to cough. Donkeys are just as sensitive to the toxins in spoiled feeds as horses.

The more time your donkey spends breathing fresh air, the healthier his respiratory system will be. However, you will need to keep an eye on his weight and potentially use sand exercise arenas or bare paddocks to reduce the chances of him becoming obese.

While a donkey coughing may be nothing to worry about, a donkey with a bad cough and a high temperature could be critically ill. The best way to distinguish between an innocuous cough and one that could be life-threatening is to take a donkey’s temperature.

In South Africa, we take our donkeys and horses’ temperatures daily to check for African Horse Sickness. It’s a straightforward procedure and requires little more than a standard digital thermometer and some petroleum jelly.

A Step-By-Step Guide to Taking a Donkeys Temperature

A healthy donkey should have a body temperature of between 98℉ and 101℉. Anything higher than this is cause for concern.

A coughing donkey isn’t a common occurrence. Donkeys have an unresponsive cough reflex and, therefore, rarely show signs of respiratory disease or breathing difficulty. A donkey with a chronic cough has a severe underlying issue that needs professional diagnosis and treatment.

Many of the problems that cause a donkey to cough are easily treatable if detected early on.