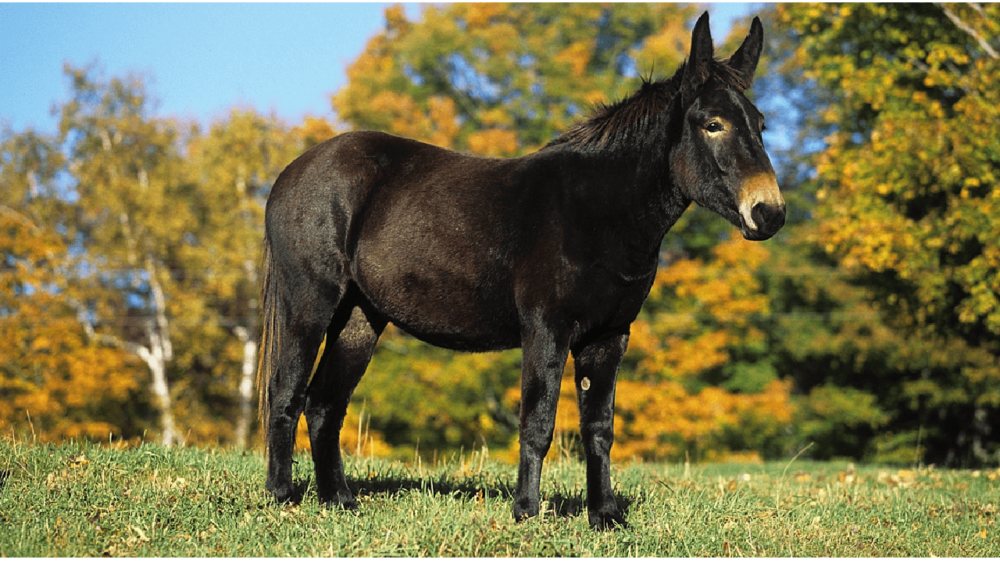 One of my friends mentioned that since horses and donkeys are very similar, they should be considered the same species. It’s an interesting thought and one I wanted to clarify.

Why are horses and donkeys different species? The scientific definition of a species is whether or not two animals can interbreed and make offspring also capable of breeding. Horses and donkeys can breed, and the result is a mule. However, mules are considered sterile and incapable of breeding. Thus, donkeys and horses are considered different species as their shared offspring cannot breed.

The Reason Mules Are Considered Infertile

For years people have assumed that donkeys and horses are different breeds from the same subspecies because of their comparable form and similar living habits. But, this is not true.

Horses and donkeys both belong to the Equidae family and sub-family Equus. There are 17 species of odd-toed ungulates (large mammals with hooves). Although they are in the same 2903family, they are more like cousins than twins. Each animal has its own set of genetics and attributes.

While it is true that donkeys and horses share some similarities, both have very different characteristics and mannerisms that make it easy to tell the two apart.

Horses and Donkeys Can Breed But Are Different Species

The extra chromosome makes mules unable to reproduce….most of the time.

Some Mules Can Reproduce

But over the years, there have been reports of mules reproducing with other mules and horses or donkeys. In 2007, a mule gave birth to another mule in Colorado. Genetic testing confirmed that the mule foal, named Kule Mool, was the offspring of the mule mother (NPR source). Kule Mule’s genome showed cells with 63 chromosomes and cells with 64 chromosomes. He was considered a miracle, but he wasn’t the only one.

How do mules reproduce even though they are sterile? Occasionally mule mares do produce an egg with an even number of chromosomes. But, even then, the eggs usually don’t have a half-set that is compatible with another half-set from male sperm. There is no known instance of a mule jack reproducing.

That may be because most mule jacks are castrated and never have the opportunity to attempt reproduction.

So, it’s very rare for mule mares to produce an egg with the correct number of chromosomes and is also compatible with sperm chromosomes. But it happened. And, it has happened before. 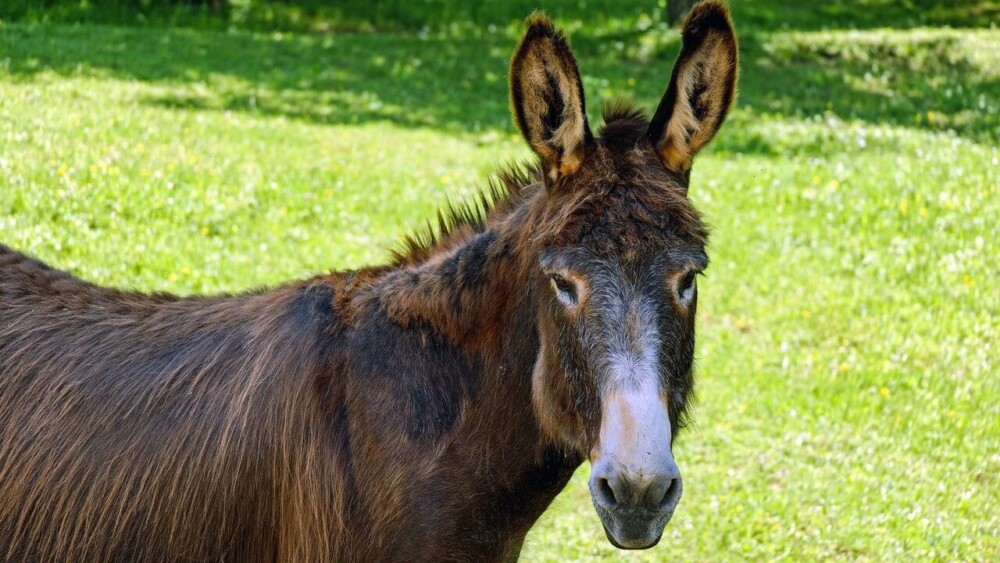 Mules have a donkey father (jack) and a horse mother (mare). Hinnies have a horse father (stallion) and a donkey mother (jenny). Hinnies are usually physically weaker than mules.

Mules usually inherit their higher intelligence, strength, patience, endurance, and surefootedness from their donkey fathers. They inherit their physical beauty, athletic ability, and speed from their horse mother.

Hinnies are much rarer. Stallions aren’t as interested in breeding a donkey jenny, and it takes a little more work for the reproduction to occur. A hinny is slower and less energetic than mules. Hinnies are better than mules in rough terrain because they are more meticulous than mules.

Both the mule and the hinny are stronger, hardier, and have tougher hooves than horses. They require less feed and resist parasites better than horses. A mule and a hinny might exhibit the flight instinct from their horse parent or the freeze instinct from the donkey parent, depending on their individual personality.

Mules Reproducing with Horses and Donkeys

Mules can reproduce with horses or donkeys. Although this doesn’t happen frequently, it is occasionally possible. A Donkule or a Jule refers to the offspring of a donkey father (jack) and a mule mother. This hybrid will carry many of the traits of the donkey.

A hule is a mule with a mule mother and a horse father. This is even rarer because stallions are not as often interested in breeding with donkeys. 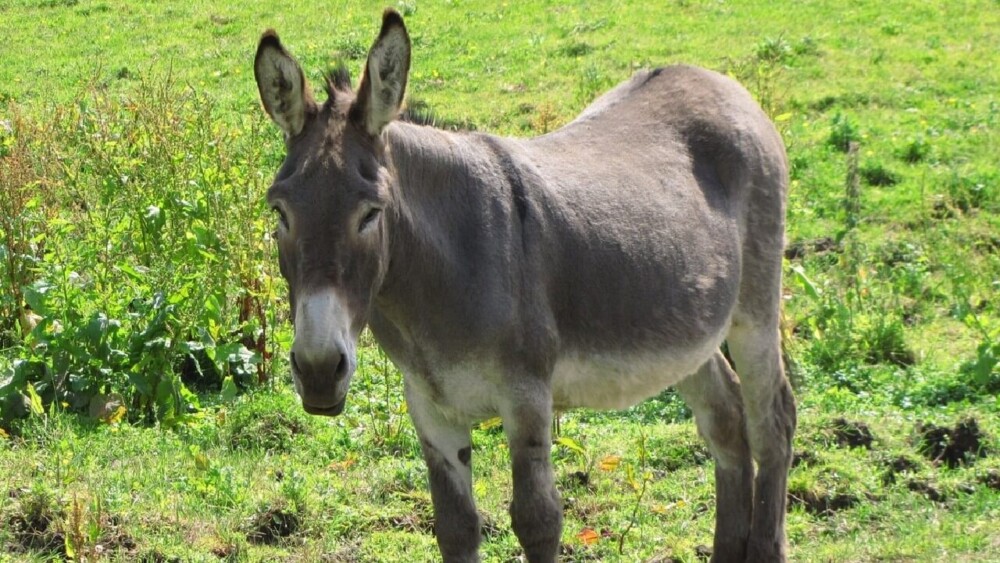 Physical Differences Between Horses and Donkeys:

One very distinct difference between horses and donkeys is their ears. Horses are born with ears that are small and oval-shaped. This amplifies sound and makes it easier for them to hear. But donkeys have much larger ears. Their origin as desert animals allows donkeys to dissipate heat in hot climates through their more prominent ears.

When looking closely at their coats, donkeys tend to have more wiry hair that feels stiff to the touch. Donkeys’ coats are also more durable to last all seasons. They don’t shed like horses, who have fine, silk-like fur.

Horse hooves are larger in comparison to donkeys’. Horses are prairie animals. Their hooves evolved to absorb impact and catch longer strides when running away from predators on flat planes. Donkeys don’t need their feet for speed and have developed thick walls around their dense frog. The sole is thicker than a horse’s. Their hooves are perfect for breaking rocks and withstand challenging terrain for long distances.

Horse and donkey tails are different. Donkeys have thick, shorter tails that have tuffs at the base used to swat flies. A horse’s tail sprouts on the hindquarters and flows towards the ground in long strands, the dock coming down just below the buttocks. Horses use their tails to protect the horse’s back legs from freezing temperatures.

Donkeys’ backs are flatter than horses’. Horses have six vertebrae in their spine that cause their withers to sit higher than their back. They have a more natural curve. Donkeys only having about five vertebrae are seen having flatter backs, a design that prevents them from getting what is called swaybacks. 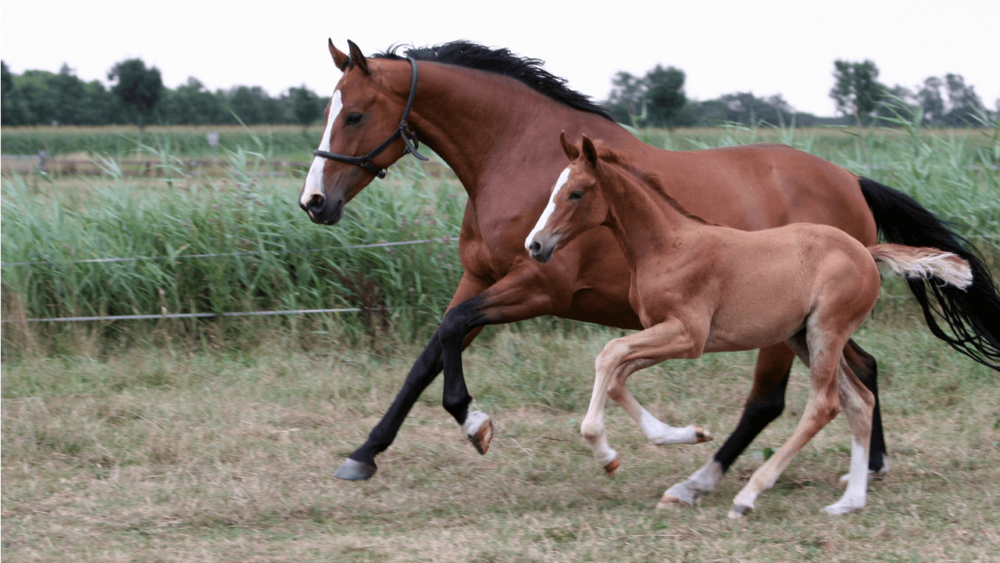 Behavioral Differences of Horses and Donkeys

Donkeys are often misjudged as stubborn, hard-headed animals with little to no training ability compared to the strict regime shown in fully trained horses. But, this is not true.

Donkeys have a strong sense of self-preservation and are unwilling to do anything that might seem dangerous or cause pain. Donkeys are one of the only animals that observe situations before deciding on an action. This is a trait very different from horses whose instinct is to flee at the first sign of danger.

Both horses and donkeys are herd animals and need companions.  Horses usually choose to herd in larger herds,  while donkeys prefer living in smaller social groups, generally pairing off and forming strong bonds with a single partner.

Additionally, unlike horses, donkeys show only minor signs of physical discomfort even when experiencing a severe medical issue. Horses tend to lay down or carry heavy limp in the case of lameness.

A reminder that being aware of the behavioral differences between both species is necessary for maintaining a healthy relationship between you and your animals while ensuring they are as safe and happy as possible.

Medical Differences Between Horses and Donkeys

The differences between donkeys and horses extend beyond their physical forms. They have different medical needs. Below are a few things to remember when taking a donkey into your care, as their medical treatment is quite different from horses in most cases.

Donkeys Have a Bigger Risk of Hyperlipidemia Than Horses

Hyperlipidemia is a condition when the fat levels in the blood elevate. It’s life-threatening to donkeys. Treat your donkey immediately if it stops eating. The illnesses that cause donkeys to stop eating can all lead to hyperlipidemia. But, when a horse stops eating, that doesn’t usually cause hyperlipidemia.

Another difference between horses and donkeys is the danger levels during castration. Horses rarely have complications when they are castrated. But, donkeys have ample blood supply in their testicles. They have a much higher risk of excessive bleeding. 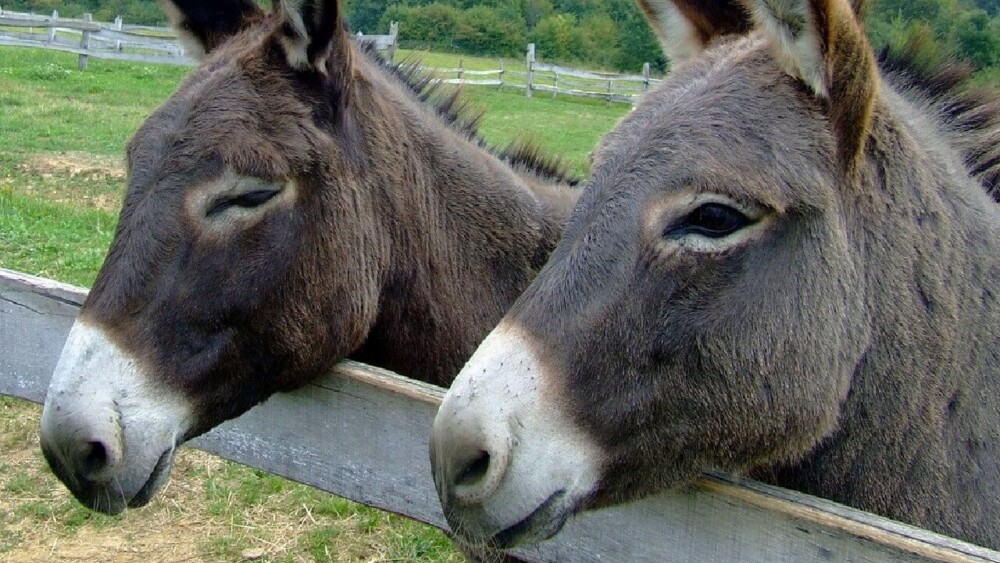 For example, if a horse needs to take NSAIDs daily, a donkey would need to take two doses for the same effect. They also need more medicine when it comes to sedatives and anesthetics for surgeries. Vets often need to give donkeys regular doses, even when they are already asleep. Experts have named this the “thrifty” gene because it evolved to help early donkeys survive in harsh environments.

Donkeys and horses have different shapes of hoofs. Farriers have to trim a donkey’s hooves differently because of this. Cracked feet, sores, and laminitis are high possibilities for a donkey to contract if their hooves are trimmed incorrectly.

Horses can absorb creams or other topical medications through their skin. Since they have excellent, thin, and flat hair, ointments can reach the skin and give them some relief. On the other hand, donkeys can’t disperse cream and a horse’s coat because of how thick and wiry the hair is.

Longer coats are also excellent at hiding wounds and skin conditions. Check your donkey’s coat more frequently than you would a horse’s coat. Make sure their skin is in good shape and that nothing is wrong.

For years people have assumed that donkeys are a subspecies of the horse, but hopefully, from this article, you learned a few tips and tricks to see that donkeys and horses are completely different. In the end, horses and donkeys each have remarkable and admirable qualities that make them unique.

One of my friends mentioned that since horses and donkeys are very similar, they should be considered the same species. It’s an interesting thought and one I wanted to clarify.

Why are horses and donkeys different species? The scientific definition of a species is whether or not two animals can interbreed and make offspring also capable of breeding. Horses and donkeys can breed, and the result is a mule. However, mules are considered sterile and incapable of breeding. Thus, donkeys and horses are considered different species as their shared offspring cannot breed.

I own a homestead with my wife and kiddos. I enjoy caring for our goats with my 14-year-old daughter, feeding our chickens with my 11-year-old, and fixing goat fences with my 8-year-old son. We have lots of various farm animals all of which my family love.

link to When Your Horse Lying Down Is a Concern: Things to Know

One early morning, I went down to the stables to feed my horses.  My two horses were nickering and excited for breakfast, except I didn’t hear my third horse. I stuck my head over the...

Continue Reading
link to Why Is My Horse Yawning? Causes, Concerns, and Treatments

Recently, my young filly was yawning a little more than usual. I had kept it in the back of my mind that my filly would start teething soon, but it still surprised me to see her yawning like she was....