First-time chicken owners often find themselves at a loss when they see their birds flying and escaping the coop. While chickens can’t fly like wild birds can, some chicken breeds and determined individuals can flap their wings and manage to propel themselves over fences, walls or go as high as tree branches.

This means that flying chickens are not only a nuisance, and they can also injure themselves and get in danger with predators or angry neighbors.

The best solution to this problem is to clip your chicken’s wings. The idea can sound daunting if you’ve never tried it before, but it’s a straightforward task, and most importantly, your ladies won’t feel a thing.

This article will cover the following areas:

By following this step-by-step guide, any chicken owner can clip their bird’s wings easily and painlessly. But first, a question we often get.

Does clipping chicken wings hurt or harm the chicken? Clipping chicken wings does no damage to a chicken. Chicken don’t have nerves in their feathers. Unless the wings are improperly clipped and the wing’s bone is damaged, the chickens will not feel anything or suffer from any harm. It is possible to clip a chicken’s wings short enough to cause bleeding. Usually, this occurs when the quill is cut, but not the bone, and no damage is done. A chicken can bleed from a quill cut without feeling pain.

But, if a chicken bleeds, there is a risk that either chicken or others in the flock will attack the blood spots and cause injury to the bleeding chicken. This can cause bullying among the flock and change the dynamics of the pecking order.

Step by Step Guide on How to Clip Chicken Wings

Possibly the most challenging part of clipping chicken wings is —catching your chicken. Some chickens are friendly and approachable, while others are more flighty and will run away when you try to catch them.

Here are some tips and tricks that can help you to catch a chicken:

If you handle your chickens regularly, it’ll be easier to hold them.

Once you catch the chicken, handle it gently to avoid injuring it. For example, apply gentle pressure to the wings when you pick them up, Or do the pro move and snatch them by the ankles. Always make sure to watch out for claws and beaks.

Spend a minute or two calming down the chicken. Pet the chicken softly until it stops making noise and struggling, or invert them to make them more docile. Firmly hold their body with your arm under the first wing.

Step 2: Expose the Chicken Wing You Want to Clip

Holding your bird firmly, and look for the wing you want to clip. First, you should expose the primary feathers by holding the bird’s wing and slowly moving it away from the chicken’s body.

Here’s what kind of feathers the chickens have:

If you’re not sure how to differentiate the primary from the other feathers, here’s how. The primary flight feathers look different from the others. They are a different color, usually longer, and are usually around ten feathers closest to the tip of the chicken’s wing.

Another important thing to consider is whether you should clip one or two wings. 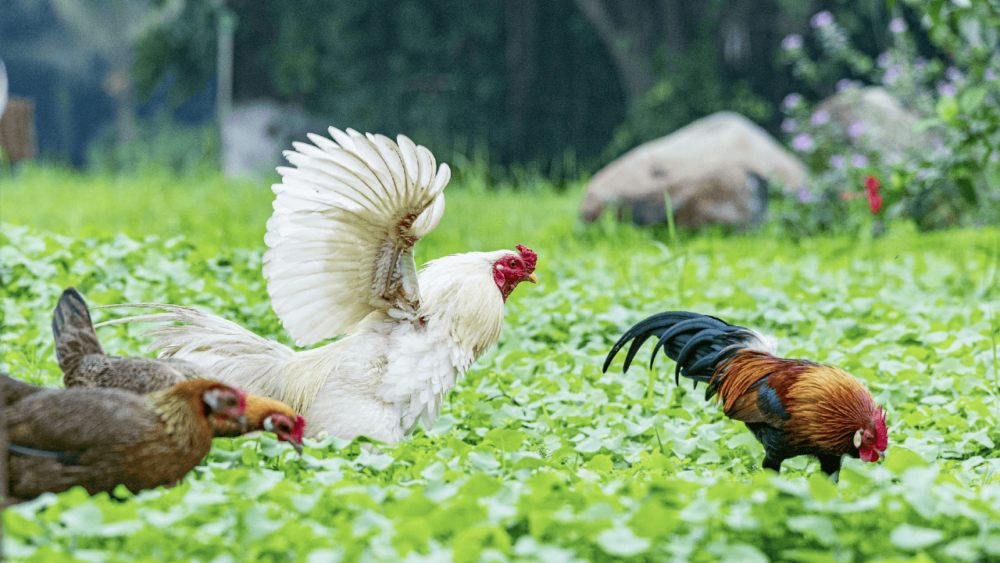 Benefits of Clipping One Wing Only

A lot of people find it enough to clip only one wing. By clipping only one wing, the bird will be off-balance because it’ll have one smaller and one longer wing, so its flying abilities will be limited. Also, the bird will find it more challenging to jump out of the free-ranging zone.

Reasons to Clip Both Wings

Chicken owners disagree if clipping only one wing is enough. This is because some chickens, such as Red Stars, learn how to adapt, and they can use their one remaining wing to develop a hopping or a flapping motion, which can propel them over the fence from a standing start.

Ultimately, it comes down to trial and error. You can start with cutting the feathers on one wing only, and chances are, in most cases, that will be enough. If, however, your chickens are finding ways to escape, you should cut the feathers from the other wing as well.

Pro tip: if you’re cutting the feathers from only one wing, choose a side and stick to it. This way, all chickens will be the same, and when the time comes to cut the wings again, you’ll be consistent with which wing to cut.

If this is your first time cutting the wings, consider getting a helper to make the process safer. In addition, a helper can hold the chicken, allowing you to focus on cutting the feathers.

Make sure the scissors you’re using are clean and sharp. Hold the chicken firmly but gently. Next, spread out the feathers of the wing you want to cut. Cut about two-thirds of the first ten feathers length on the wing.

It would be best if you cut the feathers at the right length — cut too short, and you’ll hurt the bird, cut too long, and you’ll have to do everything all over again. Aim to cut just below the smaller feathers that overlap the primary feathers and cut about 2.3 inches off. 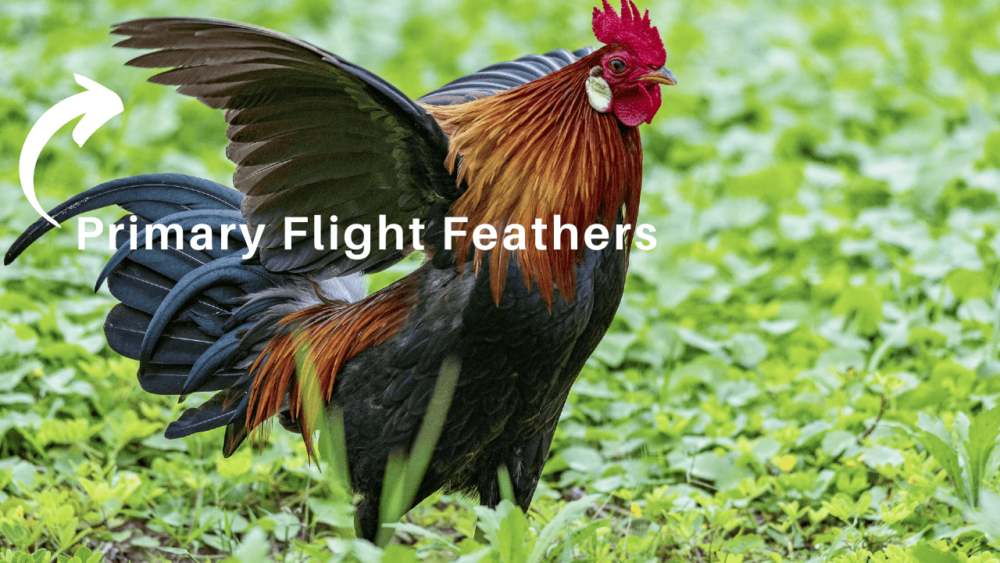 Cutting Secondary Feathers: However, when your bird is an excellent flyer, you may need to cut some of the secondary feathers as well. Make sure to check for feathers full of blood and short the feathers by about 50%.

Hard Clipping: The last cutting option is hard clipping, which cuts both the primary and secondary feathers right to the flight coverts. This will give the chicken a harsh outline, so you should resort to hard clipping only if necessary. It is much more likely that your chicken will bleed with hard clipping.

Note: When feathers are growing, there is a blood supply to them. To identify where the blood supply is, look underneath the chicken’s wing. You will see a dark shading in the shaft of the feathers. That is the blood supply. Don’t cut a feather in this dark area. It’ll be painful for the bird, and it’ll leave the area open for future infection. Instead, cut where the feather shaft is white because the blood flow to that area has receded, and there are no nerves so that the chicken won’t feel a thing.

What Happens If You Cut Too Close to the Wings?

Chicken feathers have blood veins that extend into them for about an inch. If you cut above this point, the chicken will start to bleed through the feathers cut. This can endanger your chicken because the veins in the feather don’t clot well.

Apply starch or cornflour to the cut feather. These items slow down the bleeding and speed up the clot. After the bleeding has slowed or stopped, dip the wing in hydrogen peroxide. This dulls the red color of the blood and makes it less likely that your chicken, or others, will attack the area.

If the bleeding continues for more than 10 minutes, or you are concerned, you can pull the feather. Use pliers to remove the feather by grabbing it at the base. This is another way to help speed up the clot, and while it will be uncomfortable for the chicken.

As long as you cut the feathers carefully, the chickens won’t be harmed, and more importantly, they won’t bleed. What’s more, when the wing is clipped, it won’t look any different because it’ll be folded under the remaining feathers.

Step 4: Let Go of Your Chicken

Once the clipping is done, release your chicken right away. If the chicken is bleeding, keep them separate from the flock until the bleeding stops. Monitor her to make sure she doesn’t peck at herself and reapply hydrogen peroxide to the wound. An hour or two after the bleeding stops, allow the chicken to rejoin the flock. 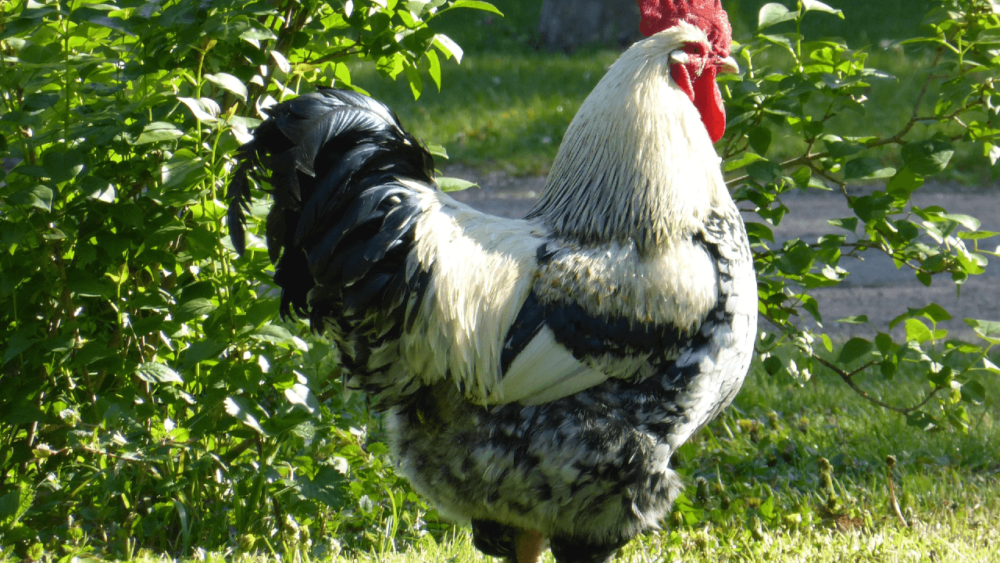 Certain chicken breeds are more likely to fly than others. Additionally, how they are raised as a chick can also make a big difference. Bantam chickens are more prone to flight because they are lighter than other chickens.

But, most chickens can fly at least 5 or 6 feet in the air. If a young chick discovers that they can fly over a 3-foot fence, they are more likely to fly over a 5 ft fence after the fence is raised. So, it’s important to confine your flock from the very beginning to avoid the increased hassle from escaped chickens.

Why Should I Clip My Chickens’ Wings?

When in the wild, chickens need their wings to fly away from predators and to get into trees to roost. In the wild, flying can be critical to survival.

However, in domestic situations, things are different. Here are the most important reasons why you should clip your chickens’ wings:

To sum up: Not clipping chicken wings means they can fly into risky situations. This goes further than them ruining your flower bed. They can run into angry neighbors and their dogs or wild animals.

How Often Do Chicken Wings Need to Be Clipped?

Clipped wings grow back, so they need to be clipped annually. Chickens usually molt in the fall (link to the article on molting). After their new feathers come in, reclipping will be needed.

Chickens are habitual creatures. That means that once they get used to the idea that they can’t escape, they’re less likely to try to. Also, chickens that get their wings clipped when young are less likely to be escapees.

Does Clipping Wings Prevent Chickens From Flying or Roosting?

Chickens will still be able to roost.  Chickens don’t usually go into full flight to roost.

Now you know all about how to cut chicken wings, from the material and the steps to take to the most commonly asked questions. Cutting chicken wings can be intimidating and stressful, both for you and for the chicken, but as long as you stick to these steps, both of you will emerge from the experience unharmed. For more information on chickens, such as how to safely transport chickens, check out this article.

Jeremy is a writer, artist and homesteader. He focuses on ethical animal raising, heritage breed preservation and sustainability. He has been raising poultry since he was seven and enjoys all the nature that surrounds him.