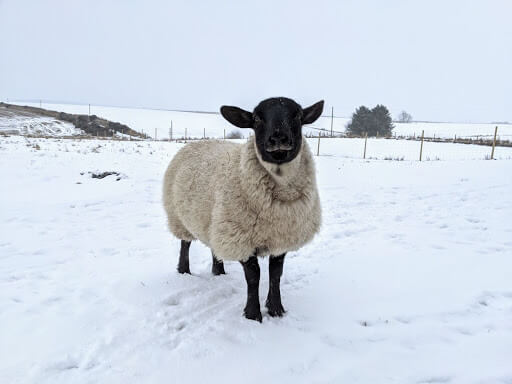 Sheep are adaptable to a certain extent, but if you want your flock to really thrive, you need to pick a breed that’s suitable for the climate that you live in. Whether you’re looking to start a new dairy flock, plan on raising lambs for meat, or want to give wool production a try, here are some of the best sheep breeds for cold climates.

All over the world, sheep are primarily raised for their meat. While every sheep breed will produce an edible carcass, certain breeds have been developed for the purpose of quality meat. Not only will these lambs be faster-growing, but their meat will also be more tender, with a superior flavor. Although they started off in the northern UK, Cheviots have now made their way around the world to other cold climates, where they are really thriving. Their muscular stature produces a meaty carcass, one that tastes quite mellow and slightly gamey.

Cheviots are a meat sheep breed that also produces respectable wool. It’s dense and long with a unique crimp, giving you the rare opportunity to make, rather than lose, money come shearing time.

Although Cheviot lambs don’t grow quite as quickly as some of the other breeds on this list, the fact that Cheviots are so productive, even on rough ground, makes up for this. They are more than capable of fending for themselves over the winter months, and their dark feet make them suitable for both wet and dry conditions.

Texels are known for being extremely muscular and low in fat, making the meat incredibly lean and tasty. Texel lambs grow quickly, usually weighing in at around 44kg at six months of age.

While nobody is sure exactly where Texel sheep originated from, they became a huge hit in the UK after they were imported in the 70s. The reason for this sudden popularity? Their incredible hardiness when faced with cold conditions.

This is a breed that makes it through some truly tough winter conditions. You’ll commonly find them in the exposed, high-altitude regions of Scotland and Canada, with these sheep able to fend for themselves throughout a long winter.

As you may have guessed from their name, Shetland sheep are native to Scotland’s Shetland Islands, an area known for its extreme weather and rough pastures. Fortunately, none of this seems to bother Shetland sheep, with the breed continuing to thrive and grow in hardiness, despite the constantly adverse conditions that they deal with.

In addition to being a highly rugged breed, Shetlands, just like many other primitive breeds, are known for their quality meat. Although the joints that they produce may be smaller than some of the other meat breeds out there that have been bred for size, they more than make up for this when it comes to quality. Plus, those smaller joints are sometimes faster and more convenient to cook – ideal for those who don’t have a large household!

Originating from the Suffolk region of the UK, Suffolk sheep are loved for their robust strength and hardiness. Just like the Texels, Suffolk lambs have a very fast growth rate, with their meat famed for its succulence. Farmers often cross the two, taking the best characteristics from each breed to create a strong and vigorous flock.

In terms of cold climates, Suffolks are able to tolerate harsh conditions. Those hard black feet help to provide protection from foot problems when wintering in wet areas, but the breed does well on drier ground too.

As an added bonus, Suffolk wool is a popular commodity among home spinners. Cross them with a Merino and you’ll have one of the best wools out there, good enough to take you into the professional wool trade.

Another British meat sheep breed, the Southdown produces a lightweight carcass, but one that’s meaty and rich in flavor. Due to their calm temperaments and smaller size, this is a breed that’s often recommended to first-timers. It’s also one that’s often used to improve an existing flock of a different breed. Several other breeds have developed from the Southdown over the years, including the Oxford Down (more on them later on!).

When it comes to cold tolerance, Southdowns adapt well. They thrive in both wet and dry conditions and are able to forage for what they need throughout the winter, even on low-quality pastures.

The breed with the highest meat to bone ratio, the Charollais comes from the east of France. If a lamb has been sired by a Charollais, then chances are that it’ll be meatier than other lambs of the same weight. What makes them even more sought-after as meat sheep is their wedge-shaped bodies – not only does this allow for easy lambing, but it also results in longer carcasses with an extra rib.

While adult Charollais sheep can handle cold conditions just fine, their lambs are a little more delicate. If you experience a cold snap during lambing, you’ll need to give those little ones some extra TLC. Pastures should be well-sheltered, otherwise, an indoor space may be required.

When it comes to milk production, cows and goats are usually the go-to animals for this. However, sheep milk has been used for centuries and is once again gaining in popularity. While yields may not be as high as what a dairy cow would give you, sheep’s milk is much higher in fat. This means that, compared to cow’s milk, you would only need a third of the amount of sheep’s milk to produce the same amount of cheese.

There are some milk sheep breeds that have really made a name for themselves over the years. Do an online search for dairy sheep and you’ll be greeted with page after page detailing the East Friesian and the Lacaune, with both breeds being fantastic milk producers. However, dig a little deeper and you’ll soon learn that most of the traditional dairy sheep breeds out there aren’t quite so hardy. While cool temperatures won’t phase them, they’re not able to handle wintering outside in freezing conditions.

Fortunately, there are a few other worthy alternatives that you can turn to instead: Let’s start with a milk sheep breed that people rarely consider. The Zwartble comes from Holland, where it was traditionally used as a milk sheep. Many find this hard to believe when looking at a lactating ewe – their teats are small and compact, so surely milk yield is nothing to rave about?

But, that’s wrong. Milk production from a Zwartble is comparable to some of the more well-known dairy sheep breeds out there. Not only that, but the milk is particularly high in fat, making Zwartbles a good choice for those who want to make their own cheese and butter. The fact that Zwartbles have longer legs also means that the act of milking is a little easier, with their teats rarely getting dirty.

Although Zwartbles generally have quite a calm and docile temperament (which makes it easy to train them to stand for milking), they’re more than capable of dealing with cold weather. Even so, many farmers choose to cross them to increase their hardiness, resulting in ewes that still have great milk production, along with lambs that can also be raised for their low-fat and subtly sweet meat.

Often referred to in Iceland as the “poor man’s cow”, the Icelandic has been used for milk for centuries. This was because of the historically rough grazing throughout Iceland, which wouldn’t have been enough to support a dairy cow through the winter. Even in these extremely cold and harsh conditions, the Icelandic sheep thrives, not only producing a large amount of milk, but also quality meat and wool.

Icelandic sheep are known for their genetic disposition to produce twins and triplets. They have a special gene, similar to one that has been found in Merinos, that can increase fertility. Pair the right sheep together and you could end up with ewes that consistently produce quads. This contributes to their high milk production, but the ewes are also more than adept at caring for all of their young, without the need for the extra lambs to be taken away.

The fact that Icelandics have such a great temperament is the icing on the cake. They can easily be taught to stand for milking in the spring, even after fending for themselves all winter.

While the Icelandic and the Zwartble are now being used in dairy flocks around the world, the Oxford Down is still making a name for itself. This breed, which was developed in the UK, is classed as a traditional minority breed, meaning that it’s not quite as easy to find. That being said, if you do happen to source some Oxford Downs, this is a breed with great milk production.

Due to their larger size, Oxford Downs are relatively easy to milk. They’re calm and quiet and come into season earlier in the year. This means that lambing can then take place earlier, or even at a staggered rate, giving you a longer milk-producing season. Lambing itself is usually easy, with the ewes rarely needing much assistance.

The sheep that don’t end up being milked can easily be raised for meat instead. Their large joints of lean meat are high quality and sell for a premium.

Since they hail from the UK, the Oxford Down is used to a cold and wet climate. That being said, this breed can now be found in just about every country around the world – they adapt well, making them a popular choice for adverse environments.

As you can tell from their name, British Milk sheep have been developed specifically with milk production in mind. Even crosses produce a large milk yield, more than enough to support triplets. Their lactation period is longer than many other breeds, with the milk being high in fat and protein, making them a popular choice for dairy flocks.

While this may be the case, the British Milk sheep also produces quite a heavy carcass. This is surprisingly lean, meaning that any extra lambs can easily be raised for meat.

Originating from the Pennine region of the UK, the British Milk sheep is definitely a strong and rugged breed. They do well in rough conditions and are able to adapt to just about every climate.

Not all cold-hardy sheep breeds are available in all parts of the world, but no matter where you live, you should be able to get some of these breeds to weather your cold winters! Check out Part 2 to find out the best Hair and Wool Sheep Breeds!