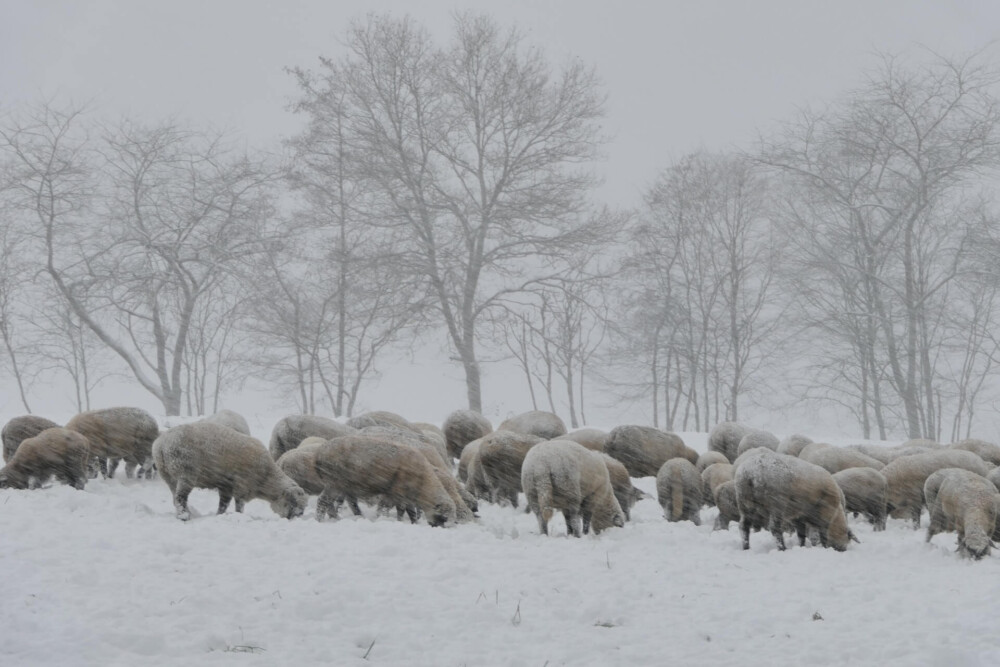 If you live in a cold climate and want to raise sheep, it’s important to get a sheep breed that’s hardy and able to withstand bitter cold weather. In this article, we’ll cover the best hair and wool sheep breeds for cold climates. Check out the best meat and milk cold sheep breeds here.

Hair sheep are breeds that don’t grow a thick woolly coat. Instead, their finer “hairs” are naturally shed each spring, doing away with the need for shearing. While this may be convenient, it also means that many hair sheep breeds simply don’t have enough protection to survive a harsh and cold winter.

That being said, some hair sheep breeds are more adaptable than others. They are able to grow a thicker undercoat in colder climates and don’t need a particularly high-quality pasture either. Still, this resiliency doesn’t happen overnight. If you’re bringing in hair sheep from a warmer area, you’ll need to help them slowly acclimatize to the cooler temperatures. Originating from the U.S. Virgin Islands, the St. Croix may be a tropical breed, but it’s also a hardy and adaptable one. Raise them in colder environments and they’ll grow a thicker coat over the winter months, which they  shed once spring rolls around. Since their coat is hollow, they’re able to thrive in wet conditions. Their hair prevents water from actually reaching their skin.

Because of this, the breed has been exported all around the world. You’ll find them in the dry deserts of the United States, as well as in the mountainous regions of Canada. Their tropical heritage means that they’re capable of breeding throughout the year. This suits farmers in colder regions well, as they’re able to plan lambing for the warmer months, allowing the lambs, who won’t yet be as hardy as their mothers, to thrive.

The St. Croix is most commonly raised for its meat. Lambing is usually trouble-free, after which the lambs grow quickly to produce a mild-flavored yet exceptionally meaty carcass. St. Croix are known for their smaller bones, which means that a St. Croix carcass is able to provide significantly more meat for its weight, compared to a carcass from another breed.

2. Romanov Sheep: Developed in the Cold

The Romanov sheep originated in Russia and is a very cold-hardy breed. Unlike many other hair sheep, the Romanov grows a woolly coat, which causes many to argue that it isn’t technically a hair sheep. However, they shed their coat in early summer, doing away with the need for shearing.

Romanov sheep are usually raised for meat. They’re not a large breed, but the lambs mature quickly. The ewes also come into season throughout the year, allowing you to develop a staggered approach to lambing if you so desire.

But, Romanov sheep aren’t known for being great mothers. They don’t produce a huge amount of milk either, so be prepared to step in if the lambs need some extra help. Alternatively, consider a Romanov cross, ideally one that increases milk production and mothering instincts, but retains the breed’s wool-shedding qualities.

A breed that was developed in Maine, the Katahdin does well in both hot and cold climates. In fact, farmers have found that raising the breed in a colder climate results in lambs that are born with a longer and thicker coat, allowing them to do well in colder conditions. The fact that Katahdins are also great mothers helps with the lamb survival rate, while also doing away with the need for human intervention at lambing time.

However, if extreme cold is what you’re dealing with, you’ll need to be prepared to give your Katahdins a little extra winter protection. Supplementary feeding may be required over the winter months too. After all, the better their body condition, the hardier they’ll be in cold climates.

With their jet-black heads and snowy white bodies, Dorper sheep definitely have a distinctive appearance. This is another breed that does well in both hot and cold conditions, with many Dorper farmers around the world successfully raising a healthy flock in sub-zero winter temperatures.

Although they originate from the warmer regions of South Africa, Dorpers will grow a thicker coat in colder climates. Combined with their thicker-than-average skin, this means that most Dorper farmers can keep their flock outdoors throughout the year. Over time, this does also help to build their hardiness even more.

The Dorper was actually bred to be a mutton sheep. However, their meat isn’t traditionally “mutton-y”. Instead, it has a delicate texture and a mild taste, meaning that even those who aren’t usually a fan of mutton take well to Dorper meat. The carcasses are usually always high quality, which is partly down to the fact that the lambs start to graze earlier than many other breeds.

One of the oldest sheep breeds in the world, the Wiltshire Horn was developed in the UK. This makes it quite a special breed to the British, where native hair sheep are quite rare. Since this breed has evolved to adapt to the cold and wet climate of the UK, they’re strong and rugged. The lambs are born with a very thick and hairy coat, meaning that lambing earlier in the year shouldn’t lead to any problems.

The meat from the Wiltshire Horn is in high demand at the moment. It is known for having a sweetness and a depth of flavor that many other breeds cannot compete with. The meat also lacks any sort of smell, making Wiltshire Horn carcasses extremely popular.

Many of the sheep breeds mentioned above are already pretty multi-purpose. However, they’ve not been bred to be so – any extra uses are simply an added bonus. If you’re looking for a true dual-purpose, or even triple-purpose, sheep breed that also happens to do well in cold climates, here are a couple of options:

Officially known as the Romney Marsh, this is a breed that originated in the UK but has become extremely popular in other cold and wet climates around the world, such as New Zealand. This is down to the fact that Romney sheep are not only robust and hardy, but they’re also low-maintenance when it comes to lambing and over-wintering.

In addition to producing heavy carcasses with lean and delicate-flavored meat, even when taken from older lambs, the Romney also has a very desirable fleece. It brings together several sought-after qualities that make the wool extremely versatile, resulting in the Romney being categorized as a true dual-purpose sheep. Originating from the Middle East, Jacobs are another of the world’s oldest sheep breeds. They boast a few qualities that are rarely seen in other breeds, from their piebald appearance to their striking horns. Because of this, they’ve been historically used as ornamental sheep in the estates of England, but are now classed as a dual-purpose breed.

Today, Jacobs are usually reared for their meat and wool. Just like the other breeds on this list, carcasses are small but heavy, with the meat having a “melt in the mouth” quality to it that makes it highly desirable.

Due to their unique coloring, the wool from this breed is popular, naturally providing multiple shades without the need for dyes. Their fleeces are soft and non-greasy, and the variations between them make them a very interesting sheep to raise.

8. Sheep Breeds That Do Well With Cold Winters & Hot Summers

Many of the sheep breeds already mentioned, especially the hair sheep, are able to adapt to temperature variations. They have warm coats to protect them during cold winters, and then these are either shed or shorn away to give them relief during a hot summer. However, there are a couple of other highly adaptable breeds out there that you should know about if your climate experiences vast temperature fluctuations over the seasons:

Although technically bred in the USA, some of the original breeding stock of the Tunis came from Tunisia, giving the breed its name. This is a breed that’s now considered to be endangered, making it a good choice for those who are seeking something a little lesser-known.

Tunis sheep are primarily raised for their meat. In particular, this breed has a notably long hind-saddle, with the meat containing only a very small amount of fat. Tunis sheep are known for being quiet and calm, with ewes having fantastic mothering instincts.

Their long wooly coat is enough to provide protection during a cold winter, although indoor shelter may be required during an especially harsh cold spell. The same applies during the summer months – while this breed does well in the heat, they will need some shade from the scorching sun.

While the California Red may have been developed in a warmer region, this is another breed that has good tolerance to both the cold and the heat, although they’re better suited to dry, rather than wet, climates.

California Reds are known for being hardy and low-maintenance. Not only do they produce beautiful wool, but their meat is low-fat and tender. This is a breed that comes into season year-round, leading to some farmers attempting to milk their flock too. With the high amount of fat contained in their milk, this is a breed that also shows dairy sheep potential. Cold climates vary quite a bit. Cold dry winters are a lot different than cold humid winters. This makes quite a difference to how a sheep manages to cope over the winter since wet conditions can lead to foot and fleece problems.

Generally, black-footed sheep tend to manage just fine in both wet and dry conditions. However, even if you’ve fallen for a breed that hasn’t historically been raised in a wet environment, this doesn’t mean that it can’t be done. Make sure that only your healthiest and hardiest sheep make their way into your breeding program and, in a few generations, you’ll have a flock that’s more than capable of tolerating the natural conditions around them.

Each sheep breed out there will have its own unique characteristics, making it important to understand which ones will do best in the environmental conditions that you can offer. While pure-breed sheep are popular, many farmers choose to cross two or three different breeds to develop a flock that meets their exact needs. However you decide to do it, starting off with the right breeds is essential. In addition to reading up on your shortlisted breeds, try to also speak to farmers who are already working with those sheep – this will give you a deeper understanding of each breed before you come to actually invest in your new flock.