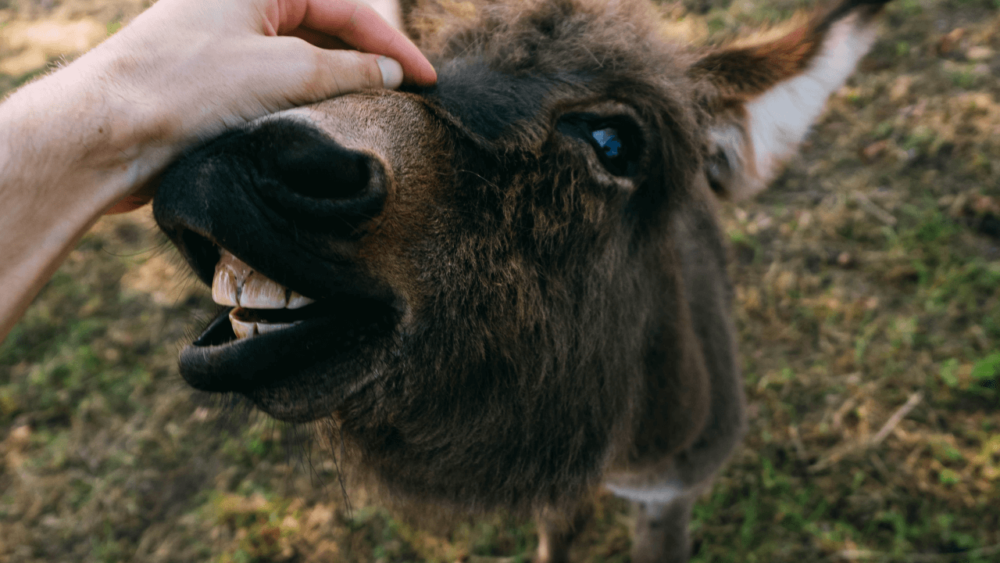 When I first got a donkey, I was not expecting the sudden nips and full-on teeth smacking bites that such a small equid could launch at me! After all, I had raised horses for many years, and I had believed myself capable of “reading” a donkey.

I didn’t understand why my new donkey was biting, what to do about it, or how to stop it. And when it came to trimming his hooves, even my farrier was wary and not too keen on clipping donkey hooves.

Concerned, I wondered; “How do you stop donkey biting?” Immediate, effective, and time-appropriate correction can train a donkey not to engage in biting behavior. Waive your arms, grunt, tap them, or spray when they bite. Donkeys are slow to react, and they may seem slow to learn, though this is merely how they think and process.

Consider why your donkey has bitten you, plan how you will correct it next time, watch for signs of a bite about to happen, and correct them stoically until they respond positively.

It may sound complicated, but if you break it down, it’s easy. The important thing is to be consistent. You should also understand why your donkey is biting and what it’s trying to communicate.

I knocked on the local donkey breeder’s door to ask for advice as I was at my wit’s end about why my little donk was biting me. I definitely had no idea how I was going to stop him from doing so.

My local donkey breeder is a curious man nicknamed Danny Donk (who can sound like a braying donkey when he’s excited). After explaining my worries, Danny kept quiet for a long time, and I asked him if I was being silly. He still didn’t respond. Then I prepared to leave since he obviously wouldn’t help me.

“There’s your problem,” he said. “You rush. Never rush a donkey.”

Danny continued to explain a few things about donkeys :

Donkeys bite to establish dominance, express negative emotions, and to play. They bite defensively when rushed, annoyed, frustrated, ill, or lonely. They may bite to play aggressively, especially if they haven’t been trained not to bite. If donkeys perceive a threat, they will bite, even if the threat is you touching behind their ears.

1. Donkeys Are the Ultimate Lateral Thinkers

Far from being slow or stupid, donkeys process information from all sides. They really think about things, and when you rush them or lose your patience, they respond defensively—biting as a result.

Okay, so a donkey may come running up to you, braying like their heart is breaking with joy at seeing you. But they don’t show the more nuanced emotions like being annoyed, frustrated, or lonely. If you don’t know donkeys yet, you may miss the finer signs that could warn you they are feeling unhappy.

By reading the signs your donkey shows you, you can see a bite coming, head it off, and correct the negative donkey behavior. 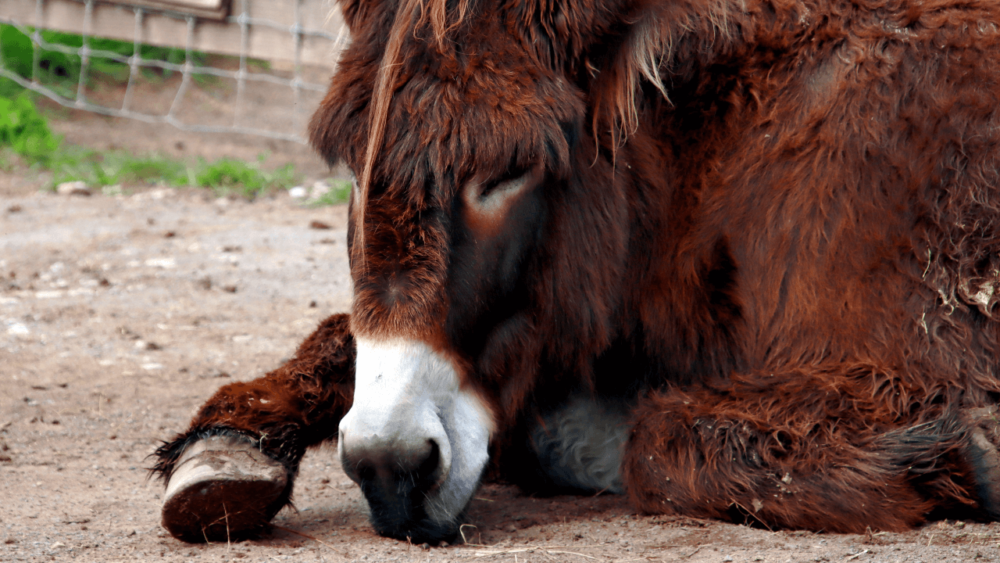 3. Donkeys Behave Strangely for a Reason

While horses would run away from something threatening, a donkey would face down a threat.

4. Donkeys Bite When Unhappy or Ill

By understanding donkey biting behavior, you can rule out all possible reasons that could provoke a biting situation. If flies have been bothering your donkey’s eyes the whole day now, you can almost bet on the donkey venting their frustrations by nipping at you.

A donkey in pain will also be extra cranky, and they may bite at you if you touch them, try to move them, or “bother” them.

Check your donkey’s health if they suddenly start biting more frequently. Perhaps your donkey has stomach cramps or feels colicky since they have worms?

5. Your Donkey Doesn’t Respect You

This may seem like a no-brainer, but a donkey who doesn’t respect you will see you as lower on the herd pecking order than them. To remind you of your social standing, your donkey may bite and kick at you.

6. Donkeys Can Play Aggressively When Bored

Overfed donkeys that don’t have any need to graze actively may become bored. As a result, they may want to play when you go near them or try to work with them. Nips and full teeth-snapping bites can result.

7. Donkeys Do What They Know (Training is Key)

If your donkey has been with a previous owner who didn’t train them correctly or perhaps didn’t correct negative behavior such as biting, your donkey will bite. They are simply doing what they know. You need to show them a new way of doing things. Remember, it takes a long time for a donkey to think about your new training and accept it. 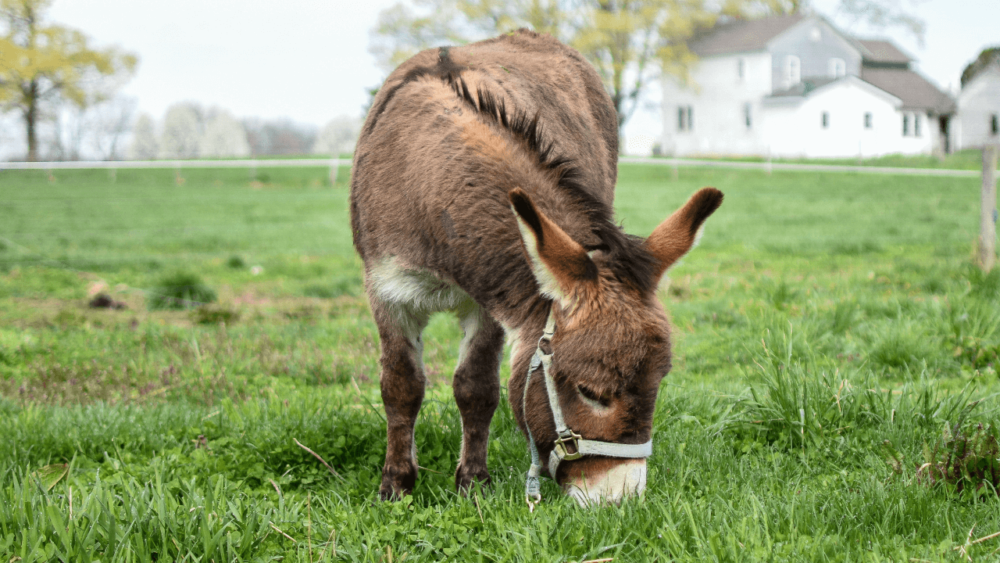 Okay, I missed the first few signs my donkey was about to snap teeth at me. He wasn’t obvious about it like a horse would be. My horses tend to almost shout at me that they are going to bite.

A horse may flatten teeth, stiffen their body, and you can almost feel violence from them when they are about to bite. A donkey starts thinking about the bite way before you are even aware they are unhappy.

Donkeys carefully plan what they will do and how they will do it. While the bite is still on the drawing board, you should already be taking corrective action. Wait a little longer, and your donkey will have given you a really potent skin-twisting bite.

You may notice a swishing tail, a few stern glances, a braced stance, and a clenched lower lip. Sometimes, with a donkey, it’s just a feeling that they are up to something.

Time to get proactive with your donkey. Before you let them sink their teeth into you, reward positive behavior. If your donkey knows to back out of your space, then politely and patiently ask them to do so. If your donkey moves a step back, reward with praise and a few treats.

Next, keep an eye out for negative behavior, such as moving into your space (without an invitation). Always be aware of what your donkey’s body language says to you. No movement should be allowed that is disrespectful to you as the herd leader.

There are a few great tools in your arsenal to train your donkey not to bite:

If your donkey lunges at you or looks like they are about to bite, you can grunt at them. Using a negative sound such as “uh-uh” or “he-he” can also help dissuade your donkey from biting.

Spray With Water and Citrus Solution

Donkeys are scent sensitive. They don’t like the smell of citrus, so if your donkey tries to grab at you, spraying them with a water bottle containing a mix of water and lemon juice is a great repellent. This unpleasant smell will remind your donkey they are not playing nice and that you don’t approve. It won’t hurt.

Body Language (Yours and His)

If you notice your donkey looks aggressive or that they are trying to bite you, then use body language to repel them. Widen your arms, wave your hands, stomp your feet, and grunt to tell them off. When your donkey thinks you are bigger than you really are, they will back off.

When my donkey tries to latch on with teeth, I respond with a simple finger tap on the nose. It’s proven effective, and I find it’s more about timing than the amount of force I use. Pinching your donkey on the shoulder or neck when they show signs of biting behavior can also work to change their minds. 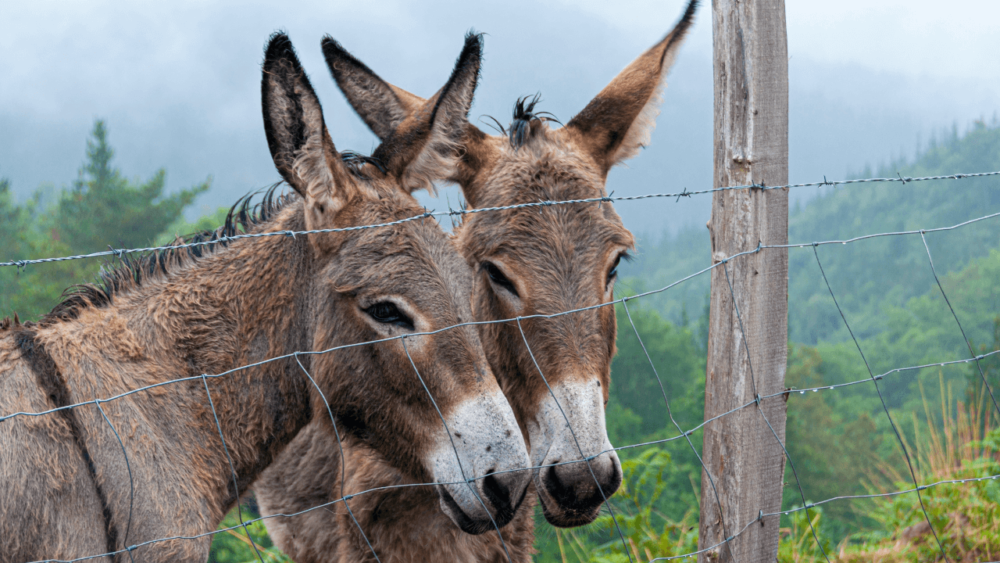 Donkey bites are particularly painful. A donkey doesn’t bite like other animals as a donkey tends to twist their mouth when they bite. The result is a bite mark that is not only a bruise but also a twisted section of skin and flesh. In severe cases, the donkey may actually rip off the skin, leaving a large exposed area of muscle and bone.

Because of how donkeys bite, they can damage the subcutaneous tissue of the area where they bite you (even if they don’t break the skin). Seek medical treatment if they manage to separate the layers of skin or subcutaneous tissue with the bite. You may require surgery to relieve fluid buildup from the resulting edema.

When a donkey bites you, be sure to do the following:

I love my donkey, and we’ve come to an understanding. His biting behavior is almost gone now, but I know to be wary and watch for signs that my donkey is thinking about being … well, a jackass.

When you own a donkey, be sure to give them lots of time to think about things, as rushing them will only lead to biting and severe injury. Never startle a donkey as they tend to defend themselves rather than run away.

It is possible to stop your donkey from biting you. Take care, train them by using body language, spray bottles, warning sounds, a soft tap, or a pinch. Over time, you will find your donkey to be a loyal companion.

Hi, I’m Talitha van Niekerk, and I made the leap to farm animal ownership when I decided to fulfil my lifelong passion to own horses. Now, over a decade later, I run a public stable facility on 180 acres of land, caring for over 75 horses of all breeds and sizes. I love to write about my experiences, sharing the knowledge I have gained and helping others achieve their life’s passion to live on the land.