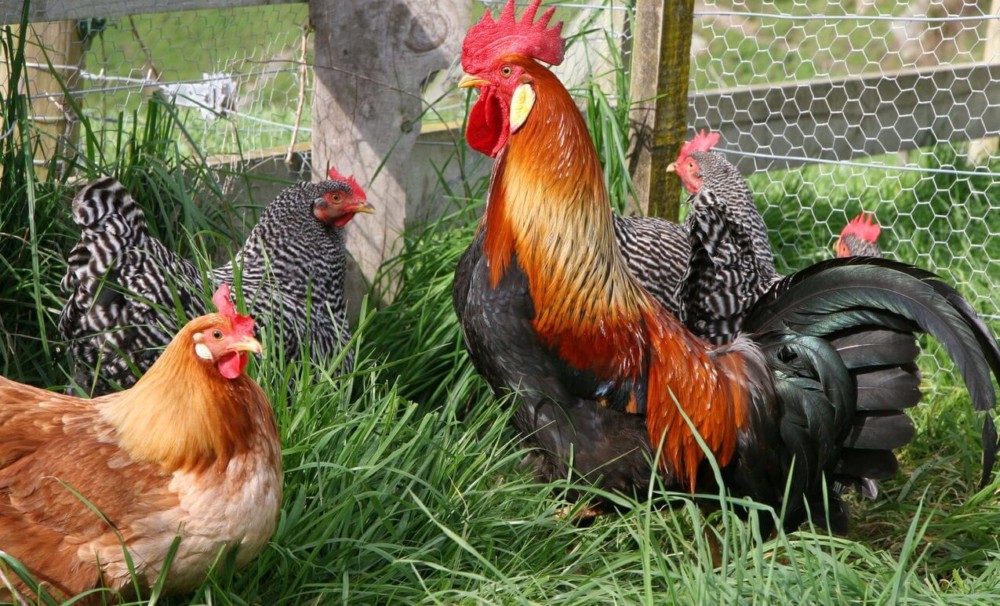 The decision to get a rooster can be an important one. If you don’t know what you are getting into, certain aspects of rooster ownership can catch you by surprise. But, roosters also offer quite a few benefits to a flock of hens so it’s important to know both sides of the debate.

Should I get a rooster? Roosters are not required for hens to lay eggs, but they are needed if you plan to raise your own chicks. Roosters also provide an added layer of protection and flock control against predators and bullying. They bring order to the flock.

There are 7 great reasons to own a rooster:

4 reasons to avoid owning a rooster:

Just because there are more pros to owning a rooster than cons doesn’t mean that everyone should own a rooster. In many circumstances, roosters should be avoided. Let’s dive in deeper to all the considerations to owning roos.

Chickens are one of the most vulnerable animals to raise. They don’t defend themselves effectively unless there is a rooster in the flock. A good rooster is always scanning the sky for hawks, owls, and other birds of prey. He’s also always on the lookout for other predators.

Plus, roos that have taken ownership of the flock will battle to the death to protect his ladies. Roosters will frequently take on rats, snakes, weasels, raccoons and other dangers to the flock. This makes them a valuable watchdog, but can also mean that they are aggressive to unfamiliar people.

The pecking order in a flock is a constant fight for power. In a flock without a rooster, usually 2 or 3 of the most aggressive or largest hens will bicker of who is the top hen. This can lead to aggressive behavior among the flock and may even lead to excessive bullying. While you can curb bullying in a flock with these successful steps, a rooster will also curb bullying. He will watch for hens that are picking on smaller hens and step in to stop the fighting. Think of him as a peacemaker. He’ll establish dominance among the hens and keep the other hens from fighting each other for the “top dog” status in the flock.

Pro: Roosters Watch Out For The Hen’s Wants and Needs

Roosters put the girls first. When he finds a spot that has a lot of bugs or delicious treats in it, he will crow and let the hens know. He’s always watching out for their wants and needs.

He’s a real ladies man and always out to woo the ladies by offering them treats, protecting them, and providing for their wants. Many roosters will even let the ladies eat first when you scatter treats or food.

It’s crazy how a little testosterone can make the hens come alive in a little lively competition. Introduce a new rooster to the flock and you may find that your hens suddenly start producing better.

A rooster can revamp older hens that don’t lay as much, but it is only a temporary fix. Hens have a limited number of eggs they can lay in their life. So, adding a rooster can speed up the laying of those eggs, but can’t make the hen lay more eggs than she has inside of her. Usually, after the first year or two of egg production, hens may dramatically reduce the eggs they lay for the next two or three years until they completely stop laying.

If you have chickens for egg production and tend to cull or give away hens that have stopped laying, then a rooster can keep your hens laying more consistently until they have used up all of their eggs.

For homesteaders who value sustainability, the need to raise your own chicks is essential. It dramatically reduces the costs of growing your flock and allows you to maintain productive hens without constantly having to purchase new chicks.

And a rooster is critical in this process. Without a rooster, the eggs will never be fertilized and will never hatch into chicks. Roosters will fertilize the eggs and in many cases, even help to hatch and care for the young chicks.

Roosters can easily mate as many as 30 times a day. That means that a single rooster can keep quite a flock of hens occupied and their eggs fertilized.

Typically the cockerels (young male roosters) are butchered for their meat at 12-16 weeks. While they haven’t yet reached full-size, they are still large enough for a table bird and still tender because of their age. The thought of butchering your roosters may not appeal to you, but it is a common and necessary aspect of farm life. Approximately half of all chicks are roosters. Since roosters are in far less demand than hens, culling roosters is a fact of life.

In my opinion, it’s better to raise a rooster for the table than it is to senselessly kill it as a chick just because it’s a male.

Pro: Roosters Are A Beautiful Addition To Your Flock

As with many species in the animal kingdom, roosters are far more lovely, colorful and gorgeous than their female counterparts. The bright vivid colors of any breed of the rooster will delight and add beauty to your flock.

We had a rooster we got as an adult. Man, that was the prettiest bird I ever saw. The feathers were long and iridescent. The colors were vivid. Sadly, he got out of the run shortly after we got him and our attempts to capture him only made him take flight away from our property.

Plus, roosters are a beloved icon of farm life. Few animals make you feel as if you are living on a farm more than a lovely rooster all decked out for everyone to see.

It’s very entertaining to watch a rooster do his dance for the ladies. The rooster shuffle always happens when you introduce a new rooster to a flock of hens, but it can also happen at other times.

He may dance to woo a particular hen to mate or to express excitement at a special treat. Some friendlier roosters will dance when they see their human caretakers coming to show excitement.

Con: Some Roosters Can Be Aggressive To People

Roosters can take their protection of the flock seriously. Sometimes that means that a rooster will become aggressive to people. This can include you. It can also include children, neighbors, and others that the rooster isn’t familiar with.

Many breeds of chickens are usually friendlier to people and the roosters aren’t as aggressive. Orpingtons, Barred Rock, and Silkie roosters are some of the friendliest roosters. It’s also important to tame your rooster from a young chick. Roosters that are treated well, held, cuddled, and played with as young chicks will be much tamer. Continue to have regular interaction with your rooster to minimize his aggression against people.

But, you may still have problems if a neighbor kid takes care of your hens while you are gone, or if children try to play with the hens.

Con: Roosters Can Over-Mate With Hens

Roosters are pretty virile. They can make quite frequently. Some roosters will seem like they do nothing but mate the hens. Over-mating hens can cause them to lose feathers on the back and neck.

It can cause them to look picked on and bullied. It’s important to provide enough hens for your rooster to keep him occupied so your hens get some rest.

Don’t have a single rooster with only a few hens or the hens will pay the price of his eagerness.

A good rule of thumb is to provide a minimum of 8-10 hens for your rooster. But, a single rooster can easily mate with twice that many hens and keep the eggs fertile.

Con: Roosters Crow All The Time

You may believe that roosters crow in the mornings and otherwise stay fairly happy. In fact, roosters tend to crow all day long. Morning is definitely a loud time for roosters as they greet the sun and claim their territory vocally.

But, roosters will crow to sound an alarm, to alert the hens of something special, and just because they can.

Roosters love to crow. They will dramatically increase the noise of a flock. While hens talk and chatter all day long, roosters will likewise crow throughout the day. This can be a bad thing if you have close neighbors or easily annoyed neighbors.

On the other hand, for many in the country, this isn’t a negative at all. I love to wake to the sound of a rooster crowing. It makes me feel like the day is ready to start.

Con: Roosters Are Illegal In Some Areas

Because roosters are more aggressive and loud, many cities ban roosters within city limits, even if they allow hens. It’s a good idea to check with your local ordinances and make sure that you can have a rooster.

You won’t have a chance of secretly raising a rooster and not getting found out. THeir noisy crowing will alert neighbors and anyone else passing that you have broken city ordinances.

What Can I Do With Extra Roosters?

Even if you purchase only pullets, you may end up with an accidental rooster. Unless you have a very large flock, it’s not a great idea to have multiple roosters in a flock. Roosters can and will fight for dominance.

If you choose to hatch your own eggs, you will definitely end up with roosters. What’s the best way to get rid of extra roosters?

Are Roosters Aggressive To Hens? Identify and Curb Meanness

Which Chicken Breeds Have Aggressive Roosters? 7 Most Aggressive Breeds

How To Identify And Stop Chicken Flock Bullying