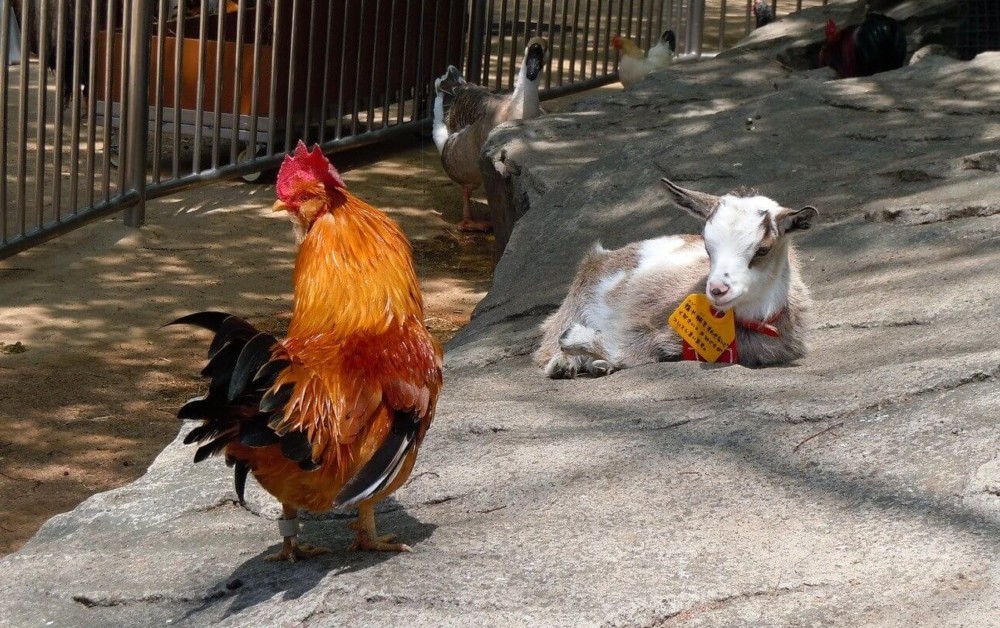 Whether you are a backyard farmer or own a lot of land, you may be wondering which animals you can house together. Chickens and goats were one of the first two animals we got.  Originally, I didn’t have a house for the goats so we put them in the chicken coop.

After a couple of weeks, I was able to get a goat house put together and move the goats out to our field, but there were a few things that I noticed about keeping chickens and goats together.

I’ve combined my experience with additional research to provide you with the best information.

While they can share some spaces, housing together can be hazardous to both species and can affect their health and the quality of food you get from each species (if you are planning to butcher them).

While there are plenty of benefits of allowing friendship between goats and chickens, it comes with disadvantages. This article will go over the advantages and dangers that can exist.

The Pros of Shared Space

While goats and chickens should not be housed together at night, there are plenty of upsides to them living together during the daytime.

Goats are very social animals. You shouldn’t own a single goat or it is likely to be depressed and get sick more frequently. Goats need at least one other goat.

Pros of goats and chickens living together:

Fewer Bugs for the Goats

Chickens love to forage for bugs, as it is their natural diet, and bugs offer some much-needed protein. This helps the goats because the number of bugs that goats have to deal with is reduced.

The hay that a goat may sleep on can get messy with goat excrement very quickly. This excrement can draw in a variety of bugs, although flies usually tend to be the first to the scene. Chickens will root through the bedding looking for bugs at any life stage, and gobble them up like a moviegoer eats popcorn. This holds true for bugs in a yard or pasture as well. Chickens will work at catching all the bugs they can find, which really benefits the goats as they do not have to worry about being bitten.

Goats as Protectors Of Chickens

Goats act as protection to chickens. The chickens will love the protective aspect of the goats. Goats can help protect your chickens from predators, both on the ground and in the air.

During the day, birds will be less likely to go after a protected chicken, and at night just the goat’s bleating can scare off the bigger ones.

By keeping goats and chickens in the same building or barn, you will find that the presence of the goats will help to prevent predators from attempting an attack. If a four-legged predator is unfortunate enough to try to tunnel into a coop that is shared with goats, they will rather surprised by the animal they are likely to meet at the end of this tunnel.

I still advise you to take steps to secure your coop.

But, having goats nearby can help to deter smaller predators. Remember that goats can also be prey to larger predators so it’s not foolproof.

Goats often attack smaller predators that get into the area to kill chickens.

The Cons of Shared Space

Now that we have discussed some of the advantages of goats and chickens living together let’s look at some of the downsides as there are a few. Some that are very serious, but can be overcome with some forethought and preparation.

There are several cons:

Let’s dive into this deeper:

Chickens poop and they are not especially particular in where they drop it. From goat food to a watering bucket or trough, chickens will just let it fly.

Goats, on the other hand, often tend to get upset about having chicken poop in their food or water and will refuse to eat or drink from a contaminated source, which is a good thing due to the likely chance that chicken poop can spread salmonella to goats.

If a chicken drops some poop in a goat sleeping area, the goats will throw a fit about that too.

Have you ever heard a goat throw a fit?

If a goat does not notice the chicken poop, however, they may end up laying in it which can lead to disease issues.

Accidental Injury To Your Chickens

Goats are not careful where they step. As a result, chickens can get squashed foot from goats stepping on their feet.

This can cause damage to your chickens.

That’s another reason you will want to make sure your chickens and goats have plenty of space to share.

Shared Illnesses Between Chickens and Goats

While some diseases are species-specific, there are a few that can be transferred from birds to mammals. One of those is salmonella, which can be a real risk anytime you keep chickens, for both humans and goats.

Salmonella is a bacterium that lives in the intestines of birds, including chickens. While it doesn’t usually harm the chicken, it can be deadly to mammals.

Anything that can or could come in contact with bird feces could be at risk of salmonella, and this includes a goat’s sleeping area.

When a bird feces gets into a goat’s udders, it can potentially transfer the salmonella bacteria to the nursing kid or to any milk your try to get from your goat as well, depending on where the bacteria has spread to.

Another risk is cryptosporidiosis, which is caused by the protozoan cryptosporidia. It’s an internal parasite that affects both mammals and birds. The parasite is not host-specific, it can move from goats to chickens without an issue and cause both animals to get sick.

While most people who care for chicken and goats don’t worry about this too much, it is a fact that chicken feed is not good for goats.

But that doesn’t mean the goat knows that!

Some goats are not good at knowing when they’ve eaten too much grain. When I shared our baby goats and chickens together for the first month, the goats always ate the chicken food. If they do eat too much grain, it could cause bloat, which can be fatal. There is also the issue that chicken feed does not offer the best balance of nutrients for goats.

Why is that important?

Insufficient nutrients will potentially lead to health issues, malnourished goats, and other problems.

While a small amount of chicken feed will not do much harm to your goats, given the opportunity a goat will literally eat themselves to death on chicken feed. Even if you don’t give them an open invitation, goats will do whatever they can to get at chicken feed if they see it.

That’s why precautions must be taken to prevent your goat from accessing chicken feed since it may only take one trip to the feed bucket to kill a goat.

Goats are not just expert escape artists; they are pretty good at breaking into places as well if their minds are set on it. To keep your goat out of a chicken coop, you’ll need to create entranced for the chickens that are higher than your goat could jump or climb.

What animals can live with goats? Goats will live in harmony with sheep, llamas, and donkeys. They can also live with cows and horses. They get along with most dogs and cats, especially if raised together.

What is the Best Animal to Protect Chickens?

How to House Pigs and Chickens Together (Benefits & Problems)