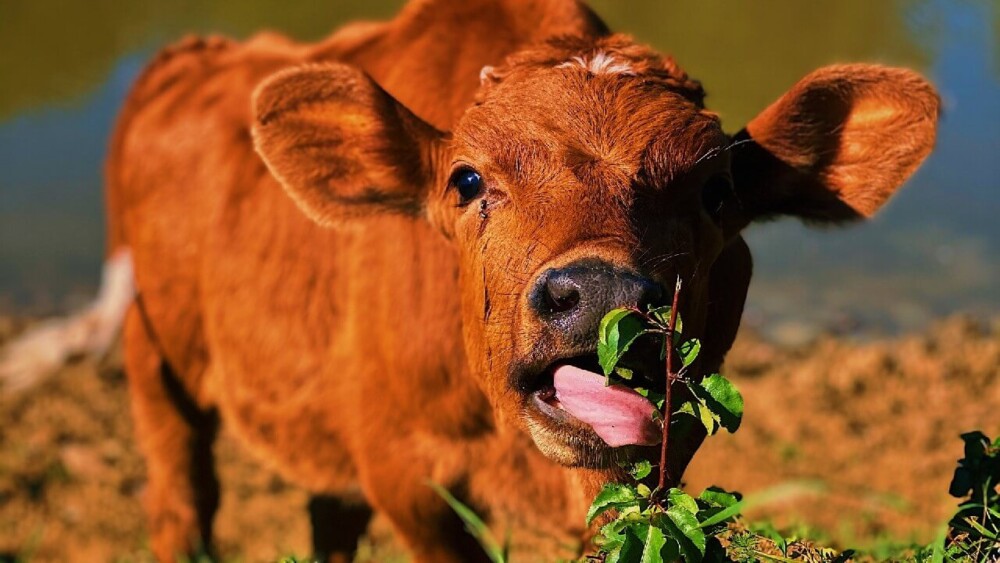 If you’ve ever driven by a field and seen cows grazing, you may have wondered if they live off grass or if they enjoy other tasty treats. While they appear to live on only plants, their diet is more complex than it seems.

Are Cows Vegetarian? Cows are not vegetarians. They are herbivores. Their stomachs are adapted to turn grass, grain, and corn into energy. A cow’s body does this exceptionally well. However, it does not mean that they don’t occasionally eat meat.

Cows can tolerate meat in small amounts and do so daily. In each bite of grass, cows accidentally consume ants, flies, worms, beetles, and other wayward bugs and insects. Ingesting these meat forms is different from carnivores, whose bodies have adapted to derive energy from meat.

When Cows Eat Other Animals

Cows digest small insects and worms caught in the grass. Their animal instinct guides them to focus on what is best for their body: plant-based food. If your cow is attracted to a small animal for a daytime snack, it may be a sign of a vitamin deficiency.

Common deficiencies to watch for include cobalt and B12. Poultry gain B12 through their feed and become sources of it for humans who consume it. Cattle produce B12 through the bacteria in their digestive system but need cobalt to support the process.

Many cows eat poultry because their feed often consists of roughage and poultry waste mixed. Despite the practice, experts don’t recommend mixing poultry litter into cattle feed. It usually contains high levels of ash, and even small bones, rocks, and dirt.

These hard objects can lead to impaction in both the rumen and abomasum, causing severe issues for the cow. Aside from these risks, there is no known link between the use of chicken litter and actual chicken consumption in cattle, although poultry litter can transmit diseases to cattle and should be used with caution, if at all.

Of the worldwide documented cases of frequent chicken consumption, there is no conclusive evidence of why cows may do so, although some cite boredom and accessibility. Other experts believe it is a telltale sign of disease, even BSE, and encourage owners to call their veterinarian at the onset of symptoms.

Cows know what they need to eat and depend upon their owners for access to it. Cows require ample space to graze and quality grass. Depending on the land and the cows’ agricultural purpose, they need grain or corn as a supplement. By providing your cattle with all the tools they deserve for a nutritious diet, they will not have to stray into unnatural and unhealthy territory. 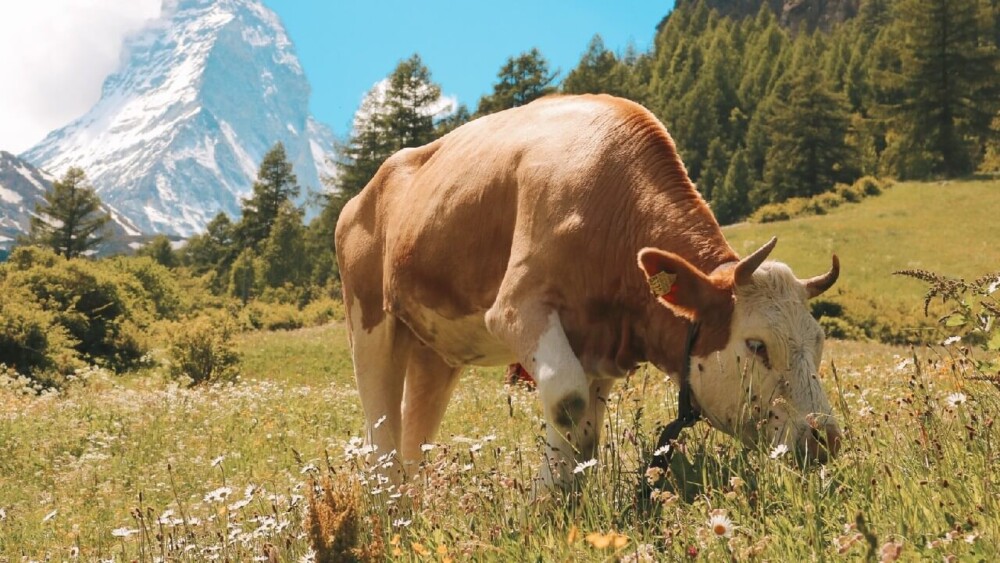 Cows digest food differently than humans and many mammals. While humans can’t get energy from grass, cows do. They are rumens. Cows have four stomachs: the rumen,  the reticulum,  the omasum, and the abomasum.

The rumen holds the grass and forage after it has initially been chewed, like a storage facility. The reticulum catches the rocks and objects that are difficult to digest. The omasum soaks up the water and nutrients from the food, and the abomasum releases the digestive enzyme to finalize the process.

Each of these stomachs works together for a common goal: to ferment the plant matter ingested and turn it into fatty acids. These fatty acids then become the cow’s source of energy.

When they first swallow their food, it goes into the rumen and the reticulum. After a rest, the less chewed portions come back up, and the cow chews it more, grinding it down. It then enters the omasum before passing through the abomasum.

You might have heard the term “cud.” Cud is partially digested food chewed by cows to facilitate digestion. Ruminant mammals use cud as part of their digestion.  Rumination means that cows can break down grass thoroughly to aid digestion.

Although most of us are more familiar with the phrase Mad Cow Disease, its proper name is BSE, which stands for Bovine Spongiform Encephalopathy. BSE created fear among consumers. That’s because it is zoonotic. It can transmit to people through the consumption of contaminated beef.

Initially, infected cows got the disease the way most people fear contracting it—ingesting tainted meat. While people can be infected, they get the human form of the disease rather than the same variant as the cow.

BSE started in the 1960s with a British herd. Rising feed prices led farmers to give processed animal parts to their herd for sustenance to save money. Unfortunately, some of the meat scraps were from sheep. These infected scraps contained a disease known as Scrapie. Scrapie is a brain disease that transmits  Mad Cow Disease through a pathological agent called a prion. Scrapie is a type of prion found in sheep and is a closely related disease to BSE.

When cows first get BSE, they look as though they are drunk. They start to have trouble standing and walking with any regular coordination. The process of deterioration progresses, and their brain and spinal cord are ultimately overwhelmed.

Cows do overeat, which causes many problems. Overeating hay and grass increase food costs for the farmer and can make the cow overweight, reducing the beef quality. However, overeating grain can have more costly effects. Cows that overeat grain can develop health problems such as founder or acidosis and may die. If cows are not on pasture, you must monitor the quantity and type of feed they receive.

While their propensity for weight gain is positive for meat producers, it can be frustrating for budget-minded owners. One way to keep feed costs under control is to understand what the cow requires and ensure they have the necessities but not the extra pound packers. 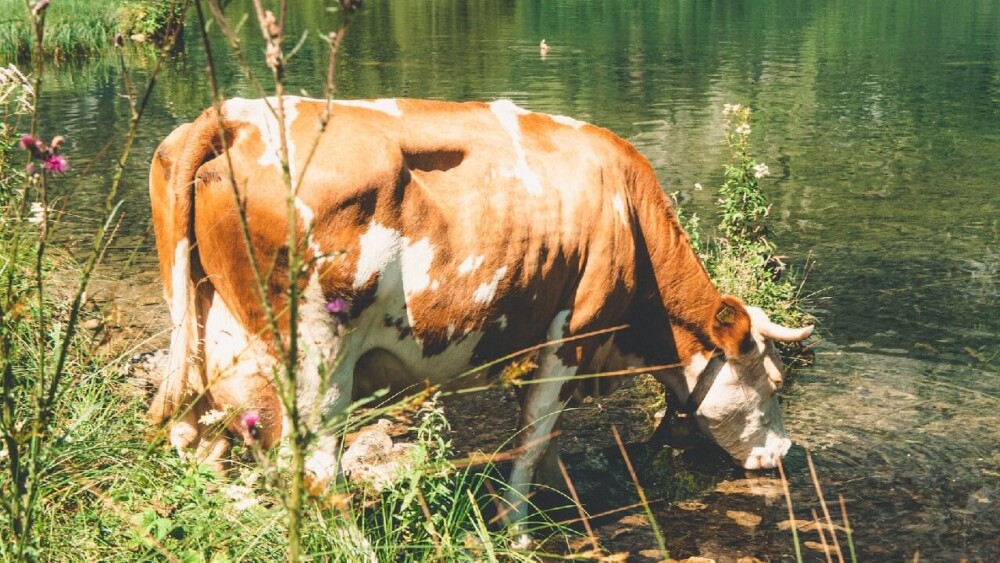 Cows need a variety of both macro and microminerals to be healthy. Cows need certain minerals in higher quantities than others. The amount varies by life stage, whether the cow is lactating, pregnant, or growing.  Understanding the function of the nutrients and then relating that to the purpose of the cow in question is a great way to ascertain how the requirements may vary.

The foundational minerals cows need to survive are calcium and phosphorus. Calcium directly aids with skeletal and muscle growth and even helps with nerve function. Cows derive most of the calcium in their diet from grazing. The soil contains calcium. Roots of the grass absorb it. Grass carries calcium from the earth to the cow.

Phosphorus is the other mineral building block of wellness. Phosphorus is associated with reproductive health and energy. Cattle raisers often overfeed it because of the fear of a deficiency. Overfeeding is not beneficial. Cows need phosphorus in the proper quantities.

For beef cattle, enough phosphorus is generally prevalent in the pasture to meet requirements. Breeding cattle may need supplemental phosphorus.

Other essential macronutrients include salt, magnesium, potassium, and sulfur. Cows often consume up to one ounce of salt per day. A salt and mineral block supplement these minerals. Sulfur can be harmful in high quantities.

Magnesium fuels internal processes like absorbing calcium while also protecting against issues such as grass tetany. Grass tetany occurs when magnesium levels are low, and there is rich grass for grazing. The combination can lead to symptoms of staggering, collapse, and twitching. Increasing magnesium intake can prevent the onset of grass tetany.

Potassium intake supports digestion, the immune system, and healthy growth and development. There are additional minerals that cows need to be healthy,  referred to as microminerals. These include chromium, cobalt, copper, iodine, iron, zinc, selenium, and manganese.

Chromium helps boost the metabolism of a cow and increases the amount of milk produced. Cobalt keeps the cow growing properly and produces B12. But, it remains in the cow for short periods, leading to its ongoing need.

Likewise, selenium helps keep the reproductive system running without issue, although it is more important for the female reproductive system.  Iodine looks after the thyroid, which controls the body’s metabolism. Lastly, manganese helps young calves find their footing through the development of cartilage and support of bone growth.

Although cows occasionally ingest meat, they are not carnivores because they seek out plants and do not intentionally eat meat. Plus, their teeth and digestive system perform best for a plant diet. In addition, eating meat can lead to diseases such as BSE.

Laws have been put into place to ban ranchers from feeding cows meat and animal byproducts to prevent the spread of these diseases.  Most countries ban mammalian-derived protein.

Cows store phosphorus and calcium in their skeletal systems. Their body accesses it when other nutrients are lacking in their diet.

Calcium and phosphorus are the foundational nutrients for cows. Deficiencies manifest with dull coats and skeletal growth. Lack of calcium can change the overall body tone and have internal effects, such as delaying the onset of puberty, decreasing the frequency of the heat cycle, or reducing the amount of milk produced.

Because cows get lots of calcium through the grass in pastures, they usually experience deficiencies in the winter and early spring months when their diet is more dependent on supplemental feeds rather than grazing alone.

In the United States, cows are not fed meat due to restrictions by federal law. The FDA has a BSE/Ruminant Feed Ban Rule, which prohibits the use of mammalian-derived protein fed to ruminant animals.

Aside from issues caused by meat, certain plants are poisonous to cows. While the list is extensive, it includes:

Recognizing those plants and working to keep your pasture free of them is an important safeguard for your cattle.

Understanding what cattle need to thrive as herbivores is essential to keeping them healthy and happy. If something appears amiss with a cow, consider what vitamins they may be lacking in their diet and how you could change their feed program to best support their nutritional needs. If something seems very wrong, or you suspect your cow has contracted BSE, call a veterinarian immediately.