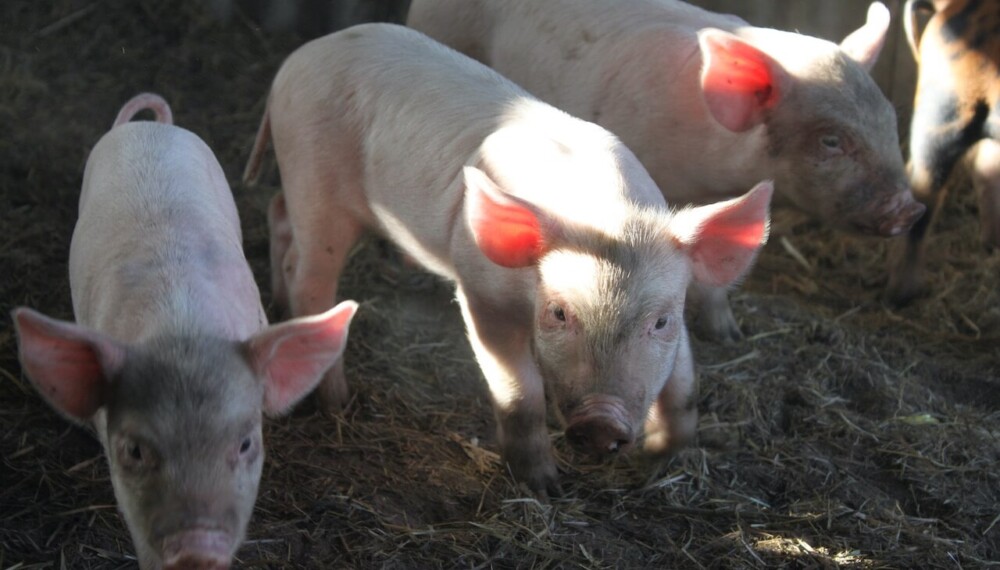 Pigs can survive in a wide variety of different habitats. Its ancestor, the wild boar, lived in almost every corner of the earth, except for arid deserts and cold, alpine regions. This adaptability is primarily due to their omnivorous diets. Pigs and wild boar will eat pretty much anything a human would, and few other things besides.

In addition to their usual diet of roots, shoots, insects, and grain, pigs will investigate other food sources. Sometimes this includes dirt.

Why is my pig eating dirt? Pigs eat dirt to get additional nutrients. While foraging, they sometimes eat earth to obtain missing minerals from their diet. Although they rarely eat soil in large quantities, they will consume small amounts, especially as piglets. Soil contains organisms and bacteria that help to build up the piglet’s immune system.

3 Reasons Your Pig Is Eating Soil

Pigs eat soil to obtain iron, and minerals or to compensate for a health issue. Dirt usually had a decent amount of iron and a myriad of minerals. When pigs don’t get a balanced diet, they may resort to eating dirt to supplement for missing nutrients. Some pigs with certain health ailments may also eat dirt in an attempt to mitigate the health issue.

Piglets are born with limited iron reserves. The milk and colostrum they get from the sow contain just 15 and 50% of their daily iron requirements.

Piglets grow rapidly, which means their blood volume also increases. That increase in volume dilutes their iron reserves even further. If they fail to find an alternative source of iron, they will become deficient, leading to anemia.

Studies found that pigs raised in confinement, with no access to “soil or feces containing iron,” are more prone to anemia than free-ranging pigs. They also get traces of copper from these sources, which enables them to utilize iron more efficiently.

Pica, or Geophagia, is the “deliberate consumption of earth, soil, or clay.” Humans have practiced geophagia for hundreds of years, and they’re not the only ones. Check out this article for more information about treating the problem in goats.

Geophagia is a form of mineral consumption practiced by invertebrates, birds, and mammals.

The most common form of geophagia within a domestic environment involves salt licks. Salt and mineral licks can occur naturally, or you can provide them artificially. A natural salt lick is a specific area where animals access essential mineral nutrients from the soil.

If your pig returns to eat soil in the same place repeatedly, chances are he’s found a good source of a mineral or essential elements, such as biometals and other trace elements.

It should be relatively easy to change your pig’s behavior in such circumstances. Pop a high-quality swine mineral lick into his enclosure, and he should get all the minerals and vitamins he needs from that and leave his soil-eating days behind him. 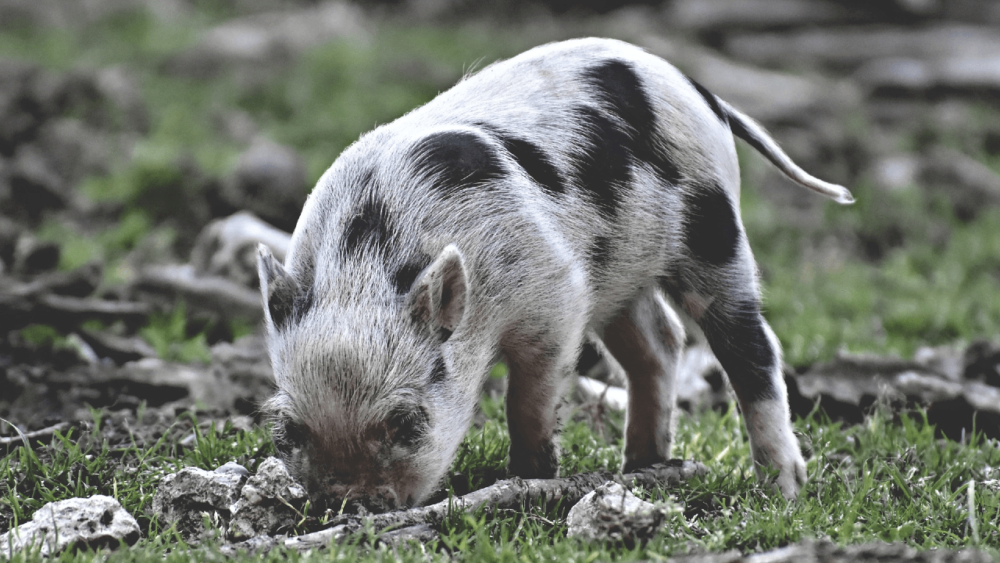 #3 Health Issues Can Cause a Pig to Eat Soil

If a pig consumes mouthfuls of soil and refuses to eat anything else, she needs immediate veterinary assistance.

A friend of mine had a pregnant sow who was due to give birth any day. We didn’t think much of it when she went off her food. Pregnant sows often stop eating shortly before giving birth.

The next day, when there was no improvement and no sign of any piglets, we started to worry. Later that same day, we found the sow taking great bites out of the earth.

She wouldn’t touch the clover or grain we’d carefully prepared for her but was munching vast quantities of dirt.

When the veterinarian arrived, she soon identified the cause. The sow was full of dead babies.

The veterinarian quickly removed the piglets, and after the ordeal was over, the sow soon regained her appetite. She also stopped eating dirt.

Pig Habits That Make It Look Like They’re Eating Dirt

A Pig Eating Its Feces May Appear To Be Eating Dirt

As we mentioned earlier, pigs eat all sorts of weird and wonderful things, including their own poop. This behavior is perfectly normal, but it can often look like they’re eating soil rather than feces.

Pigs have efficient digestive systems, but even they can’t completely break down everything they consume the first time around. Feces may not be their favorite item on the menu, but they will eat them if hungry enough. This practice gives the pig a second chance to digest any foodstuffs they didn’t utilize adequately the first time around. 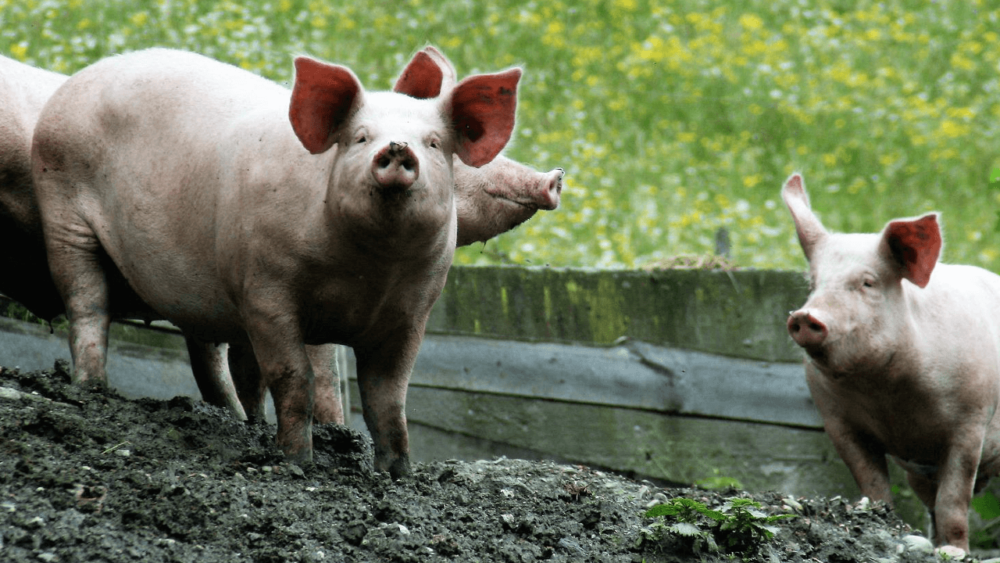 A Rooting Pig May Appear To Be Eating Soil

When pigs root, they push their snouts under the earth’s surface, moving it away to either side like a bulldozer.

Pigs root around in the earth for a variety of reasons. They dig for tubers, roots, and bulbs underground and often come up with a mouthful of soil. The soil is a side dish in these situations. The main meal arrives in the form of unearthed plant material.

Pigs are also partial to insects and other organisms found in the soil, so they could well be hunting around for a juicy earthworm rather than seeking a meal of dirt.

I’ve seen pigs taking giant bites of earth from inside their wallows. They don’t eat this soil but simply use their mouths as earth-moving machines.

Mixing fresh earth into the wallow creates the type of muddy puddle pigs relish. They can also deepen or enlarge their wallows this way, giving them more access to the water and mud they need to maintain their average body temperature.

Wallowing in water helps pigs cool off. As the water evaporates from the surface of their skin, so it removes excess heat. Water can do little against the penetrating UV of the sun and the irritating parasites that attach themselves to the pig’s sensitive skin. On the other hand, mud creates a protective layer that acts in a similar way to sunscreen. It also helps to remove ticks and other biting insects.

Pig owners report seeing their animals chewing on stones, as well as eating soil. This behavior is more prevalent in bare earth paddocks and other relatively barren environments. Scientists believe it’s associated with boredom, the inability to forage naturally, and a way to deal with stress.

Chewing rocks is potentially more damaging to a pig’s health than eating soil. There’s a chance the pig might ingest the rock or damage its teeth while chewing. Despite those possible problems, a study of outdoor-housed sows discovered that, although 40% had stones in their stomachs, “there was no indication that stone-chewing affected the health of the sows.” 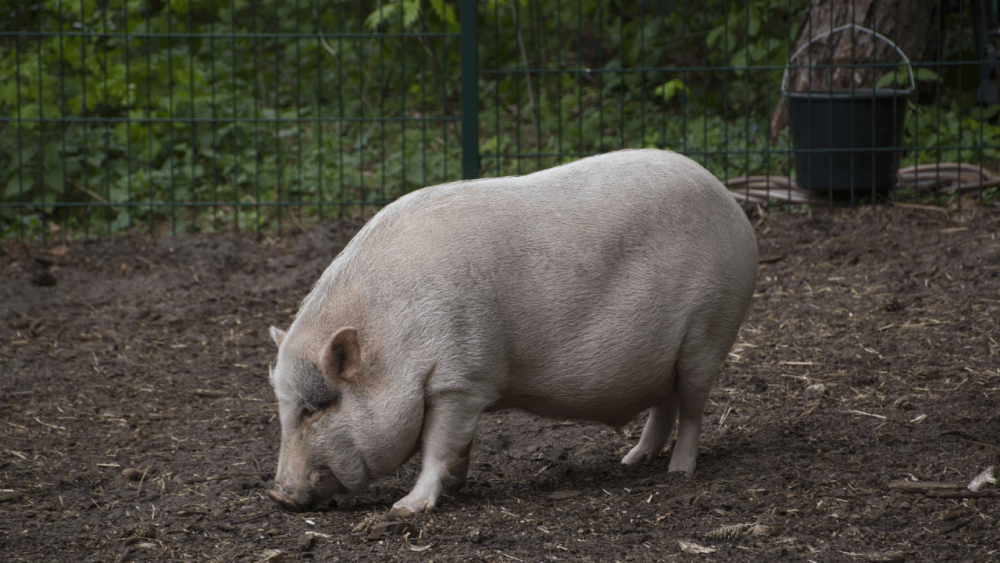 Soil Types That Are Good For Pigs

Given that mineral licks are a type of soil, are there other types of dirt that are good for pigs? Soil can form a valuable part of a pig’s diet. Some soil types can even prevent disease and boost your pigs’ growth rate.

Also known as bentonite, white clay contains numerous minerals essential for pig growth. These include calcium, copper, iron, and phosphorus. Adding a small amount (2% to 4%) of white clay to your pig’s daily grain improves palatability and boosts nutrient availability. It also makes their feed more easily digestible and slows the rate at which the food passes through the pig’s digestive tract. As a result, it can accelerate your pigs’ growth rate.

Yellow clay contains large quantities of copper and iron compounds. It can help combat iron deficiency and curb your pig’s soil-eating habits. In addition to copper and iron, yellow clay also contains 20 mineral elements that can increase appetite and weight gain while simultaneously reducing the risk of disease. 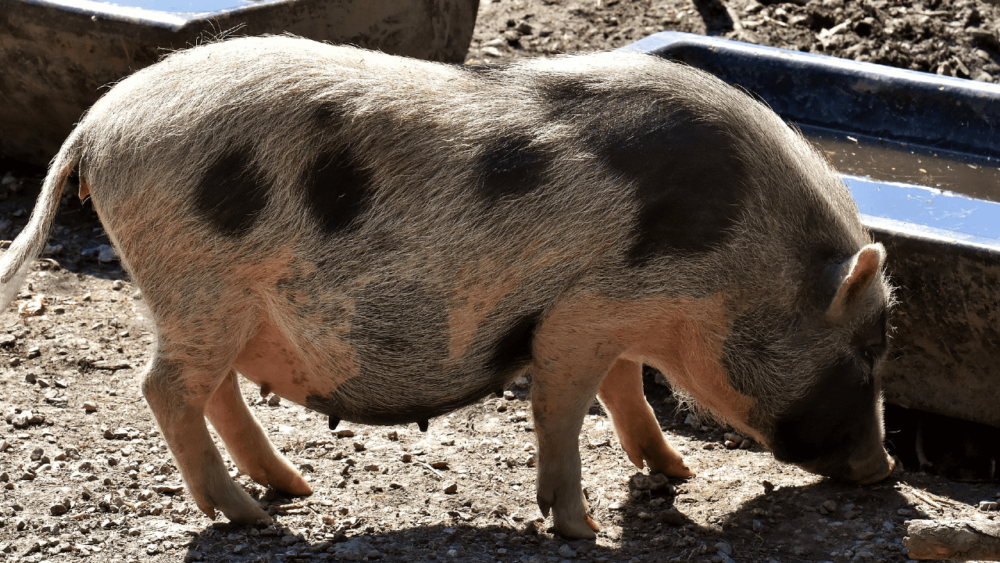 Cinder soil accelerates growth and weight gain. It contains many minerals and trace elements and a pig growth regulator known as humic acid.

Adding cinder soil to your pig’s diet can also regulate their levels of salt and alkali, reducing the risk of diarrhea, constipation, and other common health issues.

More of a natural medicine than a type of soil, maifan stone contains a range of trace elements, including critical ones like selenium, calcium, copper, iron, magnesium, and zinc.

Diatomaceous earth isn’t a soil as such, but a type of rock. It contains the fossilized remains of  tiny, aquatic organisms called diatoms. Rich in silica, it promotes healthy skin and hoofs, and helps prevent parasite outbreaks.

When added to your pig’s feed, it also promotes weight and supports both the immune and digestive systems.

Pigs do consume small amounts of soil. This natural behavior gives the pig access to trace elements and minerals that may not be available otherwise.

Some pig owners even add specific soils to their pig feed to boost their metabolism, accelerate growth, and support the immune system.

However, a pig eating large quantities of dirt and nothing else needs immediate veterinarian assistance.