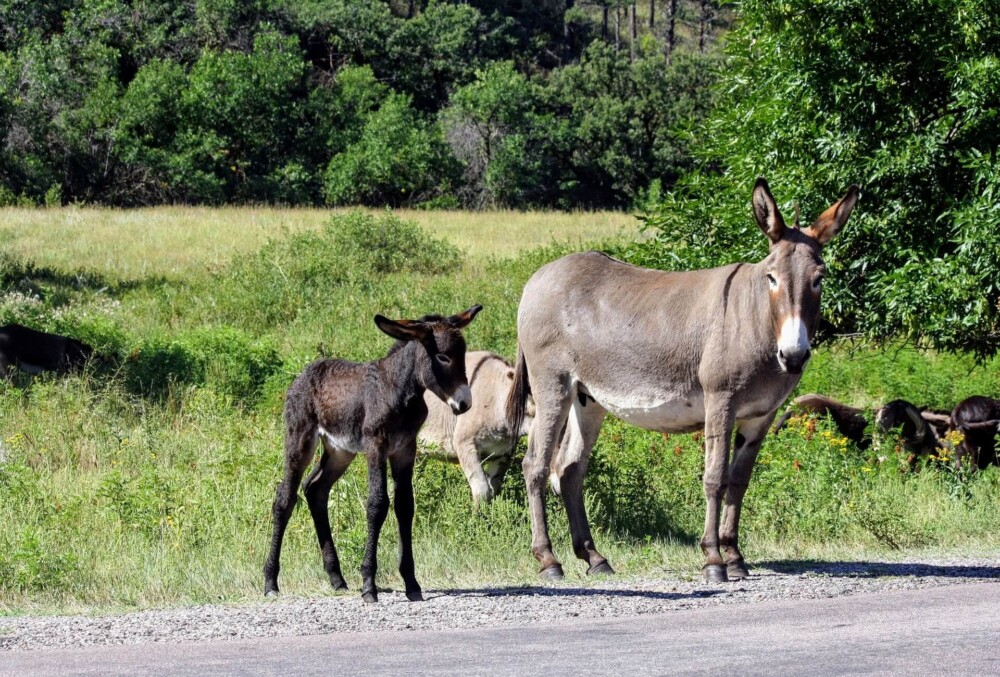 If you’ve owned even one donkey, you know that they can be amazing animals to have around. While donkeys can often enjoy the company of people and other horses, they do best with the company of their own kind. Knowing this, I sought to breed my donkeys to expand my herd. My current jennet donkey is a rescue, and a bit older, so I did some research to make sure she could reproduce without any trouble. I learned that donkeys have a pretty long reproductive lifestyle. That means that they can keep your stables and pastures full of foals for years to come. I wanted to share my research so others could make the best decision for their donkeys.

How early or soon can you breed a donkey? Most female donkeys can become pregnant as early as 8 or 9 months, but it is not healthy for a young foal to reproduce that soon. Jacks can impregnate as early as six months old. To ensure your donkey’s long-term health and reproductive capacity, wait until a foal is at least 1 year old, but 2 years is a better rule to follow because the donkeys will be fully developed and their reproductive capacities mature.

Miniature donkeys should not be bred until they are at least 2.5 years old and may benefit from waiting until they are 3 years old to breed. Jacks can reproduce with minimal effects before they are even a year old, so it’s important to separate jacks and jennets from each other as soon as they are weaned.

How old (for how long) can a donkey safely breed?

How old can miniature donkeys reproduce? Miniature donkeys only live to about 25 years old and can only breed until they are 15 years old. However, they may have fertility issues and other reproductive problems during their older years. Older donkeys should be observed during pregnancy and childbirth so they can be monitored for any life-endangering issues.

If you’re looking to expand how many donkeys are in your pasture, don’t worry, your donkeys have plenty of reproductive years ahead of them. Donkeys can breed much longer than horses, thanks to their long lifespans. They also stay relatively healthy as they age, which means pregnancies will remain less risky as your jennets grow older. But, there are a few things to watch and be aware of, so let’s dive into how you can assess if your donkey is too old to breed.

Many people compare donkeys to horses because they look alike and can interbreed to produce mules and hinnies. However, donkeys tend to live much longer than horses, which means they have significantly longer reproductive cycles.

Most horses can live into their late twenties or early thirties and usually only reproduce until their mid-teens. Breeding a horse later in life can result in fertility issues and be dangerous to the horse’s life.

Donkeys, comparatively, can live to be much older than horses. A healthy donkey can easily live t to be 40 or  50 years old. That means you can expect a more extended reproductive lifestyle than that of a horse. The only difference in this trend is miniature donkeys, which have an average lifespan of 25 years.

When is a Donkey Too Old to Breed?

Deciding when your donkey is too old to breed is as unique as your animal. However, several health factors may come into play as your donkey ages that can eventually retire them from breeding service.

As you might expect, jacks, or male donkeys, can breed much longer than jennets or females. Since they don’t have to worry about taking a foal to term, it’s generally easier to breed a jack into old age. Some jacks can produce healthy, viable offspring when they’re into their 40’s. The biggest concern with breeding old male donkeys is their fertility, as their sperm count may drop with old age. To test your older donkey’s fertility, you can have your vet evaluate the sperm count of their semen.

Jennets may have a more challenging time breeding as they get older as the process is naturally more physically demanding. Generally, jennets can breed into their early 20’s without any problems. After that, like jacks, they may have fertility problems or maybe more hostile to mating partners.

Breeding a jennet too late can also result in more severe health conditions. These include congenital disabilities or stillbirths.

While donkeys are hearty animals, make sure to consult your vet if your mature jennet is pregnant or may become pregnant. A vet can help check for problems with the upcoming birth and intervene to ensure that delivery is safe for everyone involved.

When Can You Start Breeding Donkeys?

Generally speaking, donkeys reach sexual maturity at a relatively young age. Both jacks and jennets reach sexual maturity around two years old, but they may start showing signs earlier. Some female donkeys may experience their first heat cycle at only a year old. However, it’s important not to breed donkeys when they’re this young, as it can cause trouble with their physical development.

While donkeys may be ready to breed when they’re a year old, they don’t finish growing until they’re over two years old. Breeding a donkey too young can impact their growth and cause injuries that may progress later in life. Carrying a foal to term puts stress on a young jennet’s body, including added weight on her bones and stress on her abdominal muscles.

Jacks also benefit from waiting. While a jack is fertile after a year or two, they reach their peak fertility at around five years of age. Your jack will continue being fertile for several years and will only start to decrease in fertility once he’s in his 20s.

A donkey should be at least two years old before you start breeding them so they have time to develop adequately. Waiting even longer, until they turn three years of age, is even better, as it gives the donkey more time to develop.

How Long are Donkey Pregnancies?

One thing to consider when it comes to breeding donkeys is the length of pregnancy. Donkeys gestate for over a year, which can be long enough to take an animal through different parts of its life cycle. Miniature donkeys gestate for a full year. This is why it’s important to wait until a jennet is fully developed before allowing her to reproduce. If you breed a donkey when she is too young or too old, it may put undue stress on her body.

Don’t get too impatient about breeding your jennet. Female donkeys go into estrus regularly, as often as every 20-40 days. Most jennets average about 22-23 day cycles. Their cycle is about a month-long or 21-28 days. Miniature donkeys have a cycle of about 19-21 days and ovulate 5-6 days after estrus starts. If your jennet is too young or growing old, you have plenty of opportunities to have successful breeding as she ages.

If you want to have successful breeding when your jennet is older, it’s important to breed her frequently. Going too long between pregnancies can cause a donkey to go into menopause prematurely and make it harder to conceive as she gets older. Donkeys generally get pregnant much more readily than horses, so breedings tend to be more successful. Nearly 80% of donkey breedings result in successful pregnancies, which means you’ll have ample opportunities for foals in your jennet’s future.

Conditions To Be Aware Of In Older Donkeys When Breeding Them

Donkeys tend to stay relatively healthy as they age, which bodes well for breeding them as they grow older. However, some conditions can develop after several pregnancies that you should watch out for. If you intend to breed an older jennet, you should be aware of the following conditions, as they can impact her pregnancy.

Overweight donkeys are naturally more susceptible to hyperlipaemia (high-fat content in the blood). However, the risk increases with pregnancy. If you intend to breed your jennet as she gets older, make sure to keep her at a healthy weight to mitigate this risk. Overweight donkeys will develop fat pads around their neck, stomach, and bottom. You can help manage overweight donkeys by feeding them hay, avoiding the cereal grains, and offering more frequent but smaller meals.

Older donkeys may have difficult births and may need more intervention to help remove the foal. This may be especially true for miniature donkeys, which can have larger heads as foals. Having a vet present during labor is a great way to prevent risks and provide lifesaving intervention if your donkey has dystocia while giving birth.

Several births can contribute to scarring and abnormalities inside the uterus, causing endometriosis in female donkeys. While endometriosis is a common cause of fertility issues, it can result in pregnancy problems for your donkey. Make sure to have your older jennet evaluated before breeding to see if endometriosis is cause for concern.

As always, regular checkups with your vet can ensure that your donkey has a safe pregnancy. While the conditions above are risks for all aging jennets, good veterinary care can help anticipate and mitigate them before they become emergencies.

You might have noticed that every one of the above risks impacts jennets and not jacks. That’s because, as stated above, jacks rarely have breeding problems as they grow older. The biggest concern with breeding an older male donkey is fertility, which a vet can evaluate if it is a problem. Luckily, this does not pose a risk to either part of the breeding pair, which means they can continue living long, healthy lives as part of your herd.

Understanding when a donkey is too old to breed allows you to make the best choices for your donkey moving forward. As you might expect, breeding and carrying a foal to term is much riskier for older female donkeys than males and should be a decision handled with care. Generally, donkeys are healthy little equines that can independently handle reproduction without too much intervention. However, as your donkeys get older, they sometimes benefit from a bit of help from their favorite humans.