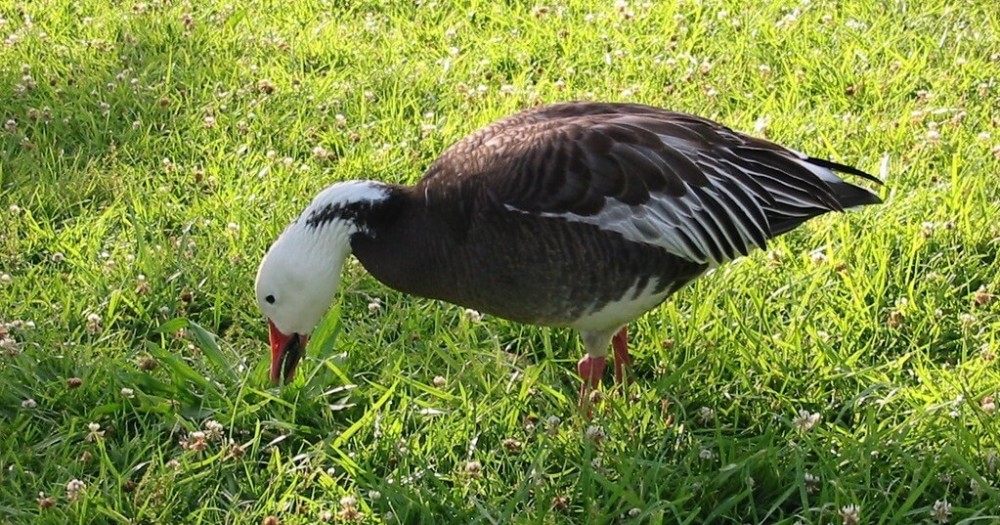 Goslings and ducklings are adorable. It makes it tempting to bring one home for a family pet. But, before you give in to the impulse to bring home a baby duck or goose, consider the full implications of raising wildfowl.

Both ducks and geese can live for as many as 20 years. Are you ready to commit for a long time? Many adopted ducks end up abandoned to the wild.

But, there are other things to consider as well such as the companionship of the goose or duck your plan to adopt.

Can I Raise One Goose? Geese need other geese to be content. Even a goose that is raised by itself will not be as happy as after a companion goose is introduced to it. While single goslings may not know that they are lonely because they have never seen another goose, they tend to have more health problems and to demonstrate greater coping issues than geese with companions.

Geese tend to mate for life. Geese are more loyal than ducks, who mostly mate for the season, but are rarely 100% loyal to their chosen mate. Geese are so loyal that if their mate dies, they will often choose to remain a widow or widower for the rest of their life.

Geese have their own special body language, communication sounds, and preferred mating rituals. Neither ducks, chickens, or swans have the same mating dance as geese. None of these species will mate with a goose willingly. This leaves a single goose lonely and unable to communicate with or truly bond with anyone else.

Although a goose will bond with a human owner, it will still be unfulfilled without another goose companion. That doesn’t mean you can’t keep a single goose, it just means you shouldn’t keep a solo goose.

Geese almost never leave their companions. They will walk everywhere together. So, if you are hoping to be the companion for a goose, think about whether you can truly give it 24-hour companionship.

It’s really much better to have at least two geese to keep each other company.

At least, not if you care about the happiness and contentment of the goose.

Can I Keep Just One Goose To Protect My Chicken Flock?

Only another goose can understand a goose’s body language, communicate with it, and mate with it. Geese are even more flock birds than ducks. Only swans are more attached to their mate than geese are to each other.

Can You Raise One Duck As A Pet?

Ducks need other ducks to be completely happy. In some cases, if a duckling is hatched and never had the chance to see other ducks, that duckling will imprint on the human caretakers it does see.

The imprint process is nature’s way of ensuring that species stay together, but it gets a little muddled with human intervention and the domestication of ducks. That’s because we tend to mix animals and flocks together.

A duckling who bonds to a human caretaker is much more dependant on that person than ducks who have other ducks to keep them company. Single ducklings will get exceptionally stressed out when they are not with their human owners. The separation anxiety that comes from the separation often causes ducks to die earlier than their counterparts who have other ducks to keep them company. This is one sign that solo ducks, although they can bond with people strongly, are still better with other duck companions.

Can You Keep One Duck With Chickens?

It is possible to keep a single duck with chickens, but it is not recommended nor is it healthy for the duck and may cause harm to the chickens. Ducks are flock animals and are very social. They are happiest when they have another duck to socialize with.

At a minimum, ducks should be raised with at least one other duck, but preferably, in a group of 3 or more.

In some cases, if a duck is hatched and never sees another duck, they will survive. Ducks are strong survivors. A duck may even bond closely with a human caretaker who spends a lot of time with the duckling.

But, survival is different from happiness. Ducks raised alone are seldom, if ever, as happy as ducks who have the companionship of other ducks.

When a duck is used to other duck friends and loses them, the single duck can become severely depressed. In many instances, newly single ducks can mourn to the point that they refuse to eat and may even starve to death from the depression. In this situation, it is best to get the duck another duck companions as soon as possible. If a single duck is raised with a flock of chickens, the duck will often adjust, but will not be as happy. In general, when chickens and ducks share living spaces, the ducks tend to leave the chickens alone.

My ducks share a run with the chickens but never follow the chickens around. The ducks are always seen together. They simply prefer other duck-company.

If you have a drake that is raised with the chickens, at some point, the drake will try to mate with your chickens. Ducks are particularly driven to pass on their genes.

The problem with this is that ducks have an external sex organ. They are one of the few species of birds with external mating organs. Chickens don’t have it. They propagate by rubbing their parts together to transfer sperm.

As a result, a drake that tries to mate with hens will cause bodily harm. He can cause them internal bleeding, a ruptured bottom, and infection. Drakes are also a lot more violent while mating than roosters so other physical harm can occur.

How much space do geese need? Two geese will only need a 4×6 foot garden shed and 20 by 40 feet worth of grazing space. Geese eat mainly grass so they make great grazers. They should have a shelter from the weather that they can retreat to in poor conditions. They should also have safety from neighborhood dogs and other predators.

Do geese get lonely? Geese do get lonely. Two or three geese is ideal, but if you absolutely cannot find another goose due to your location or the season of the year, get your goose another bird such as ducks until you can locate another goose. It will not be the same as having another partner goose but will help to somewhat alleviate their loneliness.

Do geese mate for life? Most geese are very loyal. Starting in their 2nd year of life, geese will start looking for a mate and most will find one by their 3rd or 4th year. Often this mate is the one they stay with for their entire lives. If one of the geese is killed or injured, the partner will mourn and show signs of distress and depression for a while. The other goose may sometimes find another mate. But, often will also stay single for the rest of their lives.