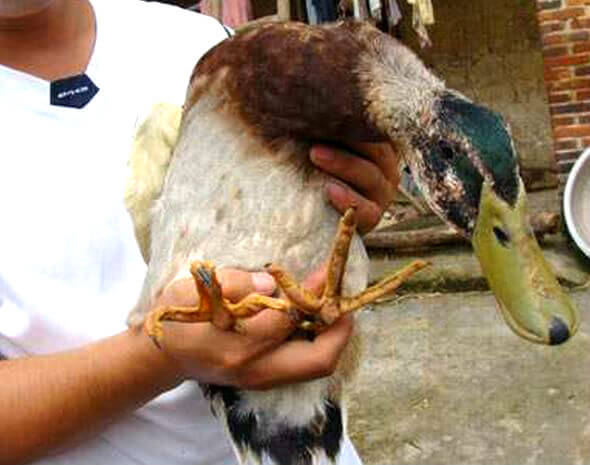 Raising ducks, chickens, turkeys and geese can be a lot of fun. If you are raising more than one type of bird, you may be wondering if it’s possible to interbreed some of your mixed flock. Depending on the types of birds you have, it may be technically possible to breed two species together.

But, often interbreeding various species can present danger to one of the species. Read on to learn more about specific cross-breeding issues.

Can A Duck Breed With A Chicken? A rooster can successfully breed with a duck, but a drake that mates with a hen will usually harm the hen. A drake has an external sex organ that hens are not made to accommodate. When successful cross-breed chick results, it will be sterile and the eggs are usually inedible.

There are known cases of a rooster mating with a hen duck. Generally, the mating won’t amount to anything. That’s because male ducks have an external sex organ that inserts into the female duck. But, chickens are actually the opposite.

The hen usually does more of the “mating” with the rooster.

As a result, when a rooster and a duck mate, the rooster’s sperm usually doesn’t make it into the female duck.

The vast majority of the time no viable offspring results from a rooster and a female duck mating.

However, occasionally a half duck-chicken breed does result. When this happens, the halfbreed is sterile and won’t be able to produce any offspring. This often happens with animals of different species or breeds mate.

Does A Rooster Mating With A Duck Harm The Duck? Roosters are more gentle mates than drakes so a rooster that mates with a duck will not harm the duck.

Can A Drake Mate With A Hen?

A drake should not be allowed to mate with hens for several reasons.

In my research, I am aware of only one instance where a hen supposedly laid an egg that resulted in a mix between a duck and a chicken. That instance isn’t verified.

It should also be noted that although there are numerous accounts of half chickens and half ducklings, that none of those accounts have been DNA tested to confirm the parentage.

While I think that it’s possible to occasionally get a halfbreed, it’s also possible that some other freak of nature occurred instead.

Can A Duck Mate With A Goose? Technically, a duck and a chicken can mate, but it rarely happens and if the offspring survives the embryo stage, it is unsterile. Ducks and geese have similar sex organs and do not harm the other species if they attempt to mate. But, they have a different number of chromosomes so the resulting offspring cannot reproduce.

There are many “sightings” of duck-goose halfbreeds in the wild. Nearly all of those hybrids are actually the cross between different breeds of ducks that result in what appears to be a goose-duck crossbreed but is not.

One example of this is when an Indian runner duck mates with other species of ducks. The Indian runner duck is more upright and looks more goose-like. When they mate with another breed of duck, the offspring is 100% duck, is a hybrid duck, but can appear to “look” like a duck-goose crossbreed.

Geese generally mate for life. Only Mallard ducks mate in pairs for life. As a result, both ducks and geese are not generally attracted to one another.

There can be exceptions.

In rare cases, a duck or a goose that is domestically raised with another species may start to mimic the habits of the other species. In the wild, this seldom happens as a solo duck or goose will usually die and won’t be “adopted” by the other species.

I have heard of a few cases in which a flock of ducks and a gaggle of geese were raised together. If something happens that leaves one duck or one goose alone with the rest of the other species, they will sometimes try to mate with the other species

Can A Duck And A Goose Produce Offspring? In the rare case that a duck and a goose mate and the egg is fertilized, the embryos are usually not viable. The embryo usually starts to grow but dies before it reaches a stage where it can hatch. In the even rarer event that the offspring hatches, it usually has a very short lifespan.

To date, there have not been any confirmed cases of a duck-goose offspring, although there are a few stories of some surviving. DNA testing has never confirmed the parentage of these offspring and many times cross-breeding ducks can result in an offspring that may look more goose-like but has no goose DNA.

There is no scientific evidence that ducks and geese can breed.

Can A Duck And A Swan Mate? Ducks and swans do not breed. Swans breed for life and are rarely without their mate. Ducks are very likely to breed with more than the female duck they are paired with, but unlikely to ever succeed in mating with a swan.

Swans are very protective of their families and have nothing to gain by breeding with more than one male. There are no known instances of a duck even attempting to mate with a swan.

Swans mate for life and as a couple learns season after season about how to successfully raise their clutch. Each season, swans generally raise more cygnets than when the pair first mated.

Ducks, on the other hand, may mate for a season with a partner but are almost never exclusive. Male ducks usually attempt to mate with as many female ducks as possible. Female ducks attempt to ward off most males but are often unsuccessful 100% of the time.

Male ducks participate less in the raising of the young than male swans. As a result, ducks have less to lose if they are not faithful to a single partner.

Can A Duck and A Turkey Mate? While a drake can possibly mate with a female turkey, resulting offspring would be very rare. There are no confirmed cases of a half turkey-duck offspring. A tom making with a female duck would likely cause severe harm or death to the duck because turkeys are much larger and more ferocious than even ducks when mating.

A drake has a strong sex drive and if there are not enough female ducks, it might be plausible that the drake would attempt to mate with a female turkey.

But, it is highly unlikely that a drake could successfully mate with a turkey. It is thought to be impossible for a duck and a turkey to produce living offspring.

Can different duck breeds mate? Nearly any duck breed can successfully mate with another duck breed. Most ducks species descend from the Mallard duck and so are sexually compatible. The offspring will be fertile and able to reproduce, but will often have difficulty finding a mate due to their odd coloring or differences in behavior. When successful, hybrid ducks actually threaten the extinction of some local duck breeds due to the drakes forcing copulation on the females of the pure species.

There are several issues that arise in nature when different duck breeds mate.

In nature, most duck breeds do not interbreed. There are several reasons for this. Often the species don’t come in contact with each other.

In modern times, because of people’s importing of ducks and the thousands of domestic ducks that have been released into the wild when the ducks became too much for the owners, crossbreeding has become more common.

In the wild, ducks imprint on their parents. When a duck is hatched, the first few adults that the duck sees becomes an imprint on that duck.

For the rest of their life, that duck will try to mate with other ducks that look like it’s parents. This keeps each breed of ducks clean in the animal kingdom.

However, in some cases in the wild, and more commonly with domestic ducks, the new hatchling may see a duck that is not it’s actual parents. It becomes imprinted with the wrong species of duck. As a result, it may attempt to crossbreed with other breeds of ducks.

In a backyard or farm setting, there are some considerations before mating various species together.

If you have mallards, they are much more likely to take off and fly away during seasonal migration. This can mean lost expense in raising your ducks. It can also mean the introduction of illnesses to local natural duck populations as feral ducks interact with wild ducks.

The reproduction of hybrid ducks may not be a consideration for homesteaders. Cross-breeding of several breeds of ducks can often produce a tastier duck that is preferred for eating.

Individual families and local farms often specialize in these varieties of ducks for the market.

In some cases, new species of ducks have been formed through selective breeding. You may be interested in such an experiment.

Can a Mallard Duck And A Muscovy Duck Mate? Muscovy ducks are the only duck that isn’t thought to be descended from a Mallard. A mallard and a muscovy are very unlikely to successfully mate with each other. Successful matings of a mallard and muscovy are usually done through artificial insemination. Even when artificially mated, the offspring are almost always sterile.

How To Raise Ducks: The Complete Guide for Beginners

What’s The Best Duck? A Complete Guide To Choosing The Right Breed