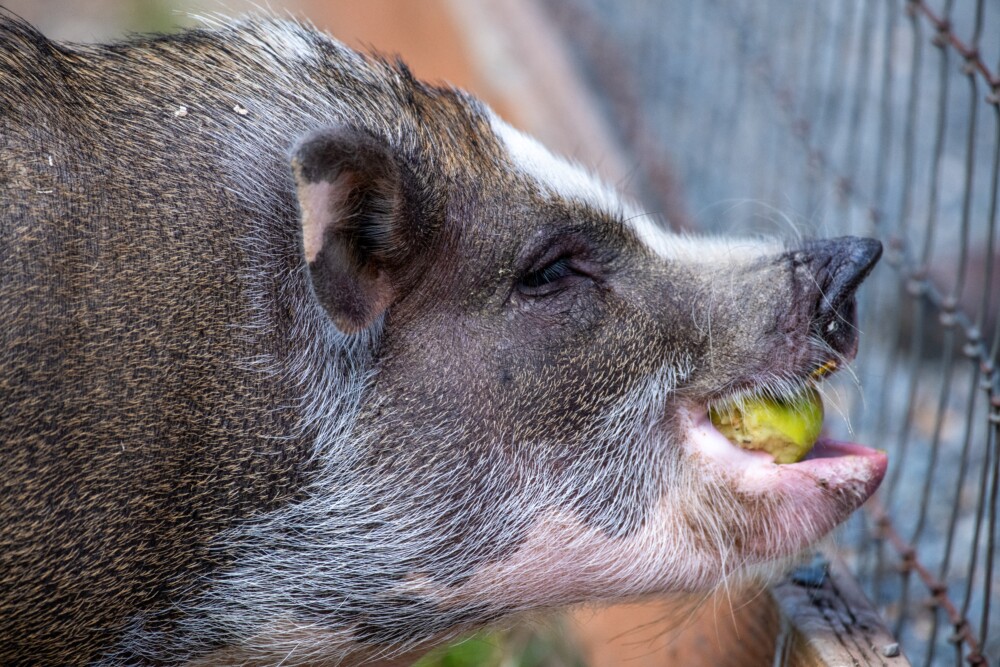 When I heard Lisa scream next to the enclosure where we keep the breeding sow, I knew it was something serious. As I came around the corner of the house, my daughter ran to me in tears. “Mommy, Sally is eating her babies!”

Sally is our spotted pig, and she had a litter of five little piglets. And half a day later, a sixth piglet appeared. This little runt of the litter was very weak, so I was expecting that he would die despite our best efforts. It seems that Sally decided to move things along a bit.

After my daughter went back to the house, I inspected the pigsty. I checked on the remaining healthy piglets—they were all still there. Sally had munched about half of the sickly piglet. So I shooed her away and cleared away the remains.

While busy with this grizzly task, I wondered if it was ever okay for pigs to eat their own kind? Cannibalism among pigs is not unheard of, but there are health implications to having a pig eat its own kind or snack on your hamburger with extra bacon.

I questioned our vet when he visited to vaccinate the other pigs. Was it okay for pigs to eat pork or bacon? While pigs will eat their own kind, feeding them pork, especially raw pork is not advisable. Feeding pork, eggs, and other meat products can transfer diseases like foot and mouth disease to pigs. It is also illegal in most states to feed meat or animal products to pigs. Pigs eating piglets can present a big problem for pig farmers. If not treated correctly, it can lead to the savagery of the whole piglet litter.

Why Do Pigs Eat Pork, and Why Is It Bad for Them?

Pigs are omnivores by nature, meaning they are opportunistic eaters. Pigs will eat anything from veggies and grasses to roadkill or other protein sources such as eggs and small animals that may find their way into the pigpen. If given a choice, pigs prefer to eat veggies, roots, and roughage such as quality hay and leafy forage.

So why would pigs eat meat if it’s not their preference? Simple. In modern farming, pigs are often penned in large numbers with limited resources, leading to intense competition. The natural social structures to pigs are denied, and the pigs begin to see each other as competition and enemies. The result is aggressive behavior and an “eat while you can” mentality.

It is bad for pigs to eat pork, especially raw pork since it contains transferable bacteria and parasites. Eating the brain and central nervous system tissue in the brain stem or spine is perhaps the most dangerous aspect of pigs eating pork. Among cows, eating nerve tissue causes mad cow disease, which is transferable to humans.

So, feeding your pig pork can result in similar diseases that may spread to humans who consume pork. Feeding your pig raw meat and pig meat increases the risk of your pigs contracting species-specific diseases. African Swine Flu (ASF) can lead to massive pig death in your swineherd. The spread of disease and the possible contaminant threat to humans are why it is illegal to feed meat to pigs destined for slaughter in most states in the U.S., parts of Europe, and Australia. 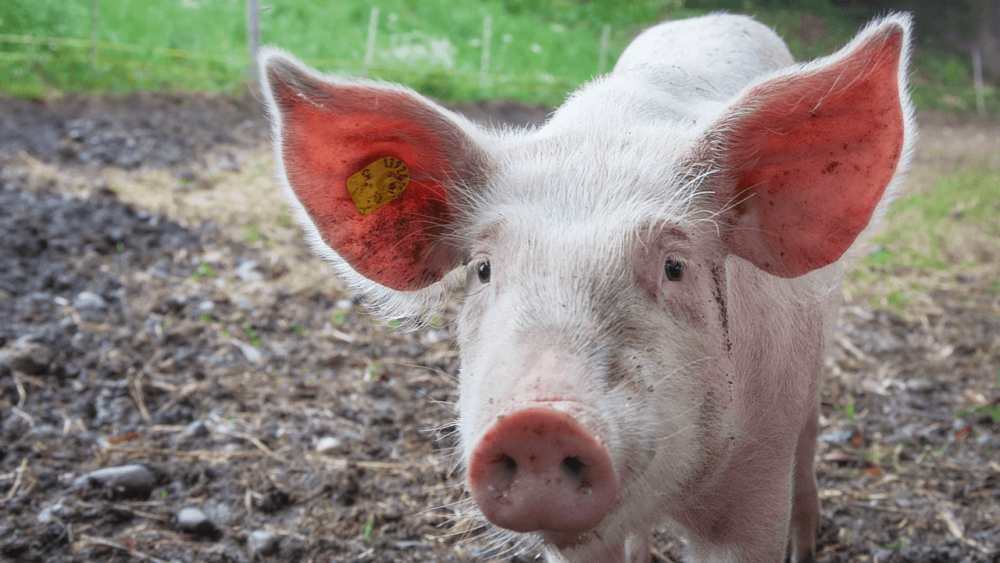 You may wonder if it’s okay to feed your own farm meat produce and left-overs to your pigs. After all, you may raise chickens, ducks, goats, sheep, and other animals. So is it safe to feed meat scraps to your pigs when you know where the meat comes from?

While it is safer to feed an unrelated species’ meat to your pigs, there are risks in feeding raw chicken, beef, or lamb. These animal carcasses contain bones your pigs may choke on, leading to serious health complications for your pigs.

Feeding rotten raw meat is also a huge no-no. Raw meat is rife with bacteria and microscopic organisms that can cause serious gut sensitivity and digestive complications for your pig.

The Danger of a Carnivorous Pig

While pigs may happily munch away on some bones in their pen, there is a hidden danger that the small-scale pig farmer needs to be conscious of. Pigs can develop a liking for meat, and they may not wait for that meat to be offered as part of their feed.

The smell of blood can attract pigs, and the herd instinct may take over, turning your cute curly-tailed pigs into ravaging predators. Stepping into their pen can become dangerous to you, your family, and your pets. Pigs reared on meat may also start to attack each other, leading to severe injuries and the savaging of whole litters of piglets. Tail biting and ear ripping are two ways that pig cannibalism already manifests among pigs in confinement.

Considering the risks of feeding meat to pigs, is it not far better to avoid adding meat to their diet? While some pigs do well on milk and other dairy products, this is also risky. Unpasteurized milk products can transmit worms and other parasites. It is far better to feed pigs what nature intended: vegetables, fruits, nuts, hay, weeds, and other plant materials. 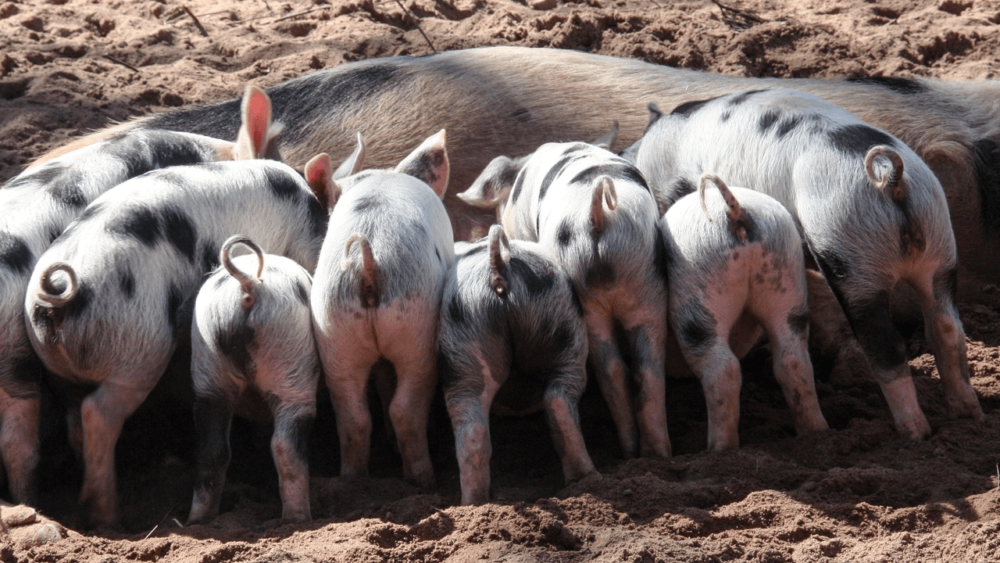 Raw Pork on Your Plate

Rare or raw meat is considered a delicacy for many food connoisseurs, and while raw pork has been considered taboo for many years, boutique farms are catering to this market.

Raw pork is not fit for human consumption since it contains many parasitic organisms like worms, which can transfer to humans and cause serious illness.

The parasite Trichinella spiralis is one of the better-known organisms in raw pork that can lead to serious foodborne illness. Other germs found in raw pork include:

These disease-causing germs can lead to significant food poisoning. However, these symptoms can take as much as 2-8 weeks to show up, making diagnosis difficult. 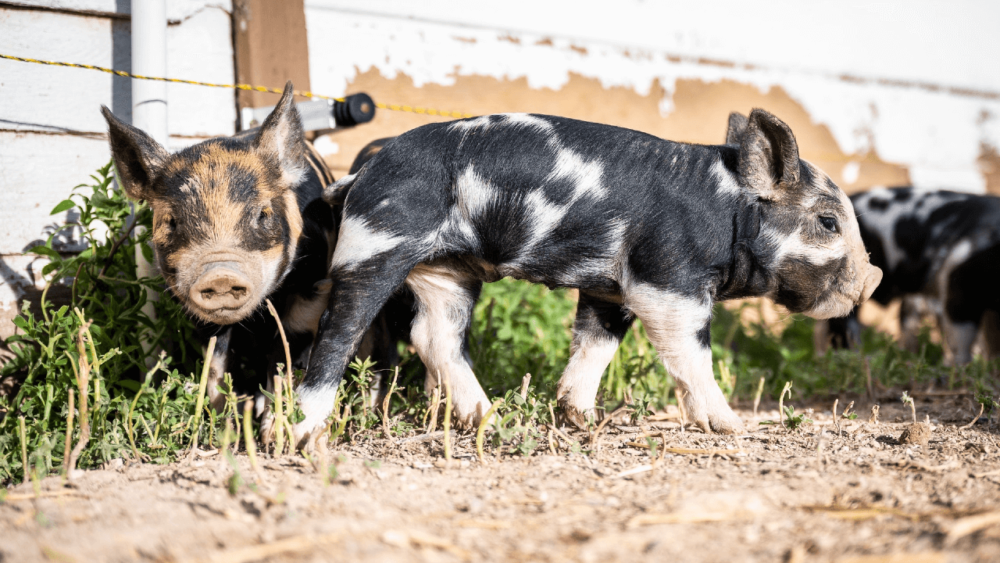 …So What About My Pig, Sally?

My dear sow, Sally, was a matter of concern. I discussed the possible reasons for her savaging one of her own piglets with my vet. More importantly, I wanted to prevent this form of cannibalism from happening again.

Possible Reasons That Cause Pig Cannibalism

Pigs can become cannibalistic when they feel threatened in their pen, and they may act aggressively toward the other pigs. Competing for resources, pigs may see the other pigs as enemies and then attack, kill, and eat them. This savage situation made headlines when a top pig farm in the U.K. was filmed with pigs eating each other out of starvation.

First-time mommies may be confused by the piglets when they are born. These squirming and squealing bundles are usually blood-covered, and the sow may confuse her own offspring for a tasty treat. If a sow is malnourished or has a deficiency, she may also eat some, if not all, of her litter in an attempt to regain the protein she lacks.

While Sally wasn’t malnourished, we later discovered that she had suffered some heatstroke and dehydration. In her confused mental state, she didn’t recognize the slow-moving piglet that was ill.

Wrapping up, the reasons pig may eat their own include:

How to Prevent Pig Cannibalism

Pig cannibalism is not natural when the pigs are kept in the right conditions. Commercial farms have contributed to unhealthy conditions being accepted by pig farmers. The drive to produce more and more pigs in as small a space as possible has fueled the rise of diseases related to the consumption of contaminated meat (among pigs and humans).

Yet, keeping pigs healthy and happy and preventing mishaps like my Sally-sow eating her young is not difficult. 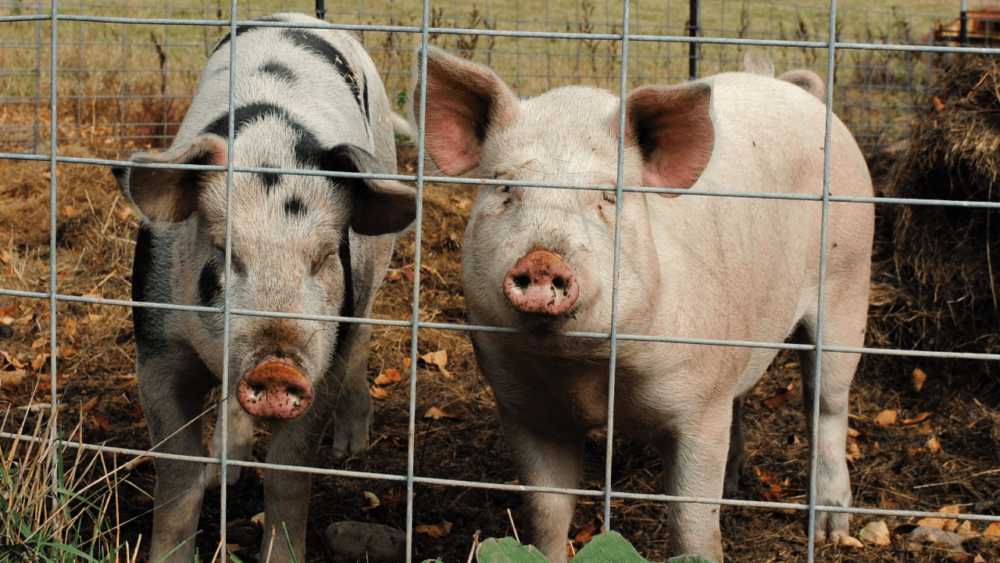 Can pigs eat pork, bacon, or other raw meat?

Pigs can eat pork or bacon, but they should not. There are risks of spreading disease from the raw meat to the pig. If the meat is cooked, it reduces the risks somewhat, though nerve tissue and brain tissue may contain harmful bacteria that don’t denature with cooking.

Is it legal to feed pigs meat scraps?

In most places, it is illegal to feed animal scraps of any kind to pigs. This includes many states across the U.S. and Australia and Britain. Laws apply primarily to pigs reared for slaughter, but even pet pigs are not legally allowed to eat meat.

When pigs eat raw meat, they can contract several diseases. Salmonella poisoning, worms, and other parasites are all risks associated with feeding raw meat to pigs. A pig can also acquire a taste for meat, making them more aggressive and likely to attack other animals (including people).

Should I feed my pigs rotten or spoiled meat?

You should not feed rotten meat to your pigs as it is laced with bacteria involved in decomposition. When these organisms are ingested, they can cause serious disease for your pig. Diamond skin, digestive issues, and more are valid concerns about feeding pigs rotten meat.

What should I do if my pig starts to eat its own kind?

If your pig eats another pig, take immediate note of the circumstances. Stressed pigs can turn cannibalistic. If it is a sow that savages her young, then take heed and consider not breeding that sow again, should she eat her young from more than one litter. Stressed pigs may fight and eat each other.

While the idea of an animal eating its own kind is quite objectionable to most of us, cannibalism is not unheard of in the animal kingdom. I knew we had to take steps to ensure Sally wouldn’t eat the rest of her piglets, but it didn’t really surprise me that she had done so. Nature has a way of dealing with ill or ailing animals, and nothing goes to waste. While this may sound cruel, it’s simply a fact of life.

I won’t feed meat to my pigs simply because the risk of disease spreading and creating an aggressive dynamic among the sows is too great. So while a pig can eat pork, the real question is whether you’re okay with letting them do so.

Hi, I’m Talitha van Niekerk, and I made the leap to farm animal ownership when I decided to fulfil my lifelong passion to own horses. Now, over a decade later, I run a public stable facility on 180 acres of land, caring for over 75 horses of all breeds and sizes. I love to write about my experiences, sharing the knowledge I have gained and helping others achieve their life’s passion to live on the land.