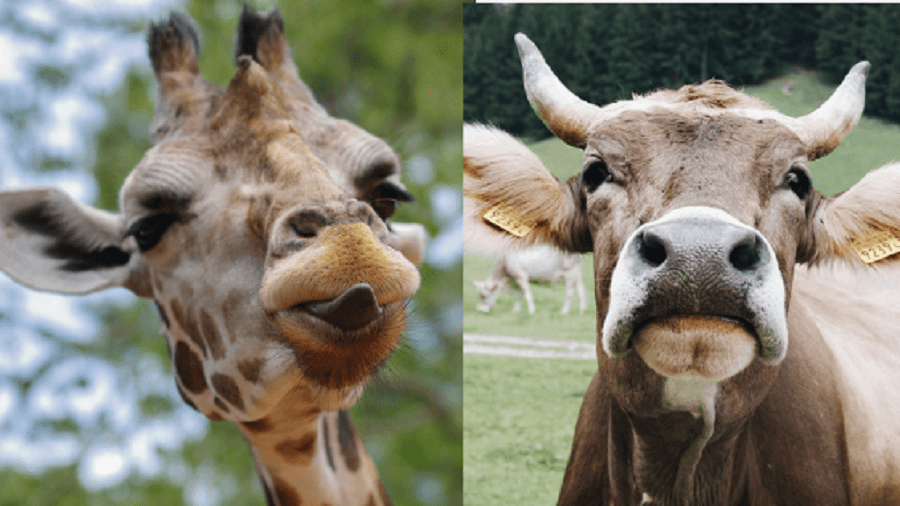 Anyone who loves cows may have heard the newest rumor that cows are related to giraffes. When I heard this odd piece of information, I wanted to find out if it was true.

Okapi are a large mammal that is striped in the legs and has a dark coat over the body. It looks sort of like a mix between a zebra and a donkey. It is the only animal classified in the same family as the giraffe. It is native to Congo. So, the Okapi is the closest related animal to the giraffe. After that, cows are the next closest related animal. However, giraffes are closely related to cows when compared with other close relatives.

Even though cows and giraffes are related, there is quite a bit of debate over how to classify animal relationships. For example, animals can be genetically linked, feature related, or taxonomy related.

Why Can’t Scientists Agree If A Cow and Giraffe Are Related?

One reason that there is little agreement around if a cow and a giraffe are related is due to the fact that giraffes have few close relatives. Other than the okapi, there are no other animals in the giraffe’s immediate class. Even okapi and giraffes are not known to be able to breed. This means that scientists must use other methods to determine if giraffes and cows are related.

Consider a scenario involving you and your best friend. Your closest relative is a parent and sibling. However, your BFF is an orphan. Her closest living relative is a 2nd great uncle once removed. See the difference?

Another reason why scientists can’t agree is that there are many ways to classify relationships. One is through animal taxonomy. This branch of classification sorts animals according to similarities. Taxonomy has occasionally been revised as scientists learn more about different species of animals and so it isn’t 100% accurate. Additionally, taxonomy hasn’t yet been able to classify animals according to genetic markers and traits.

Genetics is another method of classifying animals. Because genetically sampling animals is very expensive, a very small portion of all animals have been tested. It also means that scientists have to compare two animals against each other. Genetic classification is very time-consuming because there is not enough information to classify all the animals in the world.

Genetic testing has found some rather different animals to be more closely related than previously thought through taxonomy.

This includes the fact that bears and seals are more closely related than previously thought. The same goes for dolphins and rhinos.

What Other Animals Are Giraffes Related To?

Taxonomically, giraffes are related to the okapi because they are in the same genera family Giraffidae. No other animal is in the same family as the giraffe and okapi. The next closest relative is the pronghorn, which belongs to the superfamily Giraffoidea.

Cattle belong to the Bovidae family, which is cows can be considered a closer relative. That is why many people debate what else giraffes are related to. Some of those debates include grouping animals by other characteristics.

What Are Cows Related To?

Cows are part of the bovine family. That means that cows are classified as closely related to other animals in that family such as goats, sheep, gazelles, antelope, and yaks. But, cows are most closely related to buffaloes and antelope. Cows are even-toed animals so they are also considered to be related to giraffes, hippos, and deer.

Cows and bison have evolved differently so they are not the same animal. Cows are not domesticated bison and there are several major differences between cows and bison. Bison wander more, don’t regraze the same site, and are much larger.

Cows are used for milk and meat production and are calm animals. Bison, on the other hand, are used for meat, but never for commercial milk. Plus, even when bison are raised on a farm or ranch, they are still considered wild animals.

It is also important to remember that bison and buffalo are considered different animals. Bison are found in North America while Buffalo is found in the old world. Genetically these animals are different.

Bison and cows are genetically compatible and can breed. It is estimated that the vast majority of the American bison is no longer purebred. In fact, Yellowstone National Park boasts the last remaining wild, purebred bison in the world. The herds have about 3,500 bison in the park.

Are Giraffes Related to Horses?

Are Pigs and Elephants Related? Originally scientists thought that pigs and elephants were related because their skin is similar. However, elephants and pigs are not considered related. Pigs are more closely related to boars and hogs. Elephants are in a class of their own so their closest relative is more distant and includes dugongs and manatees. The elephants closest relative is extinct.