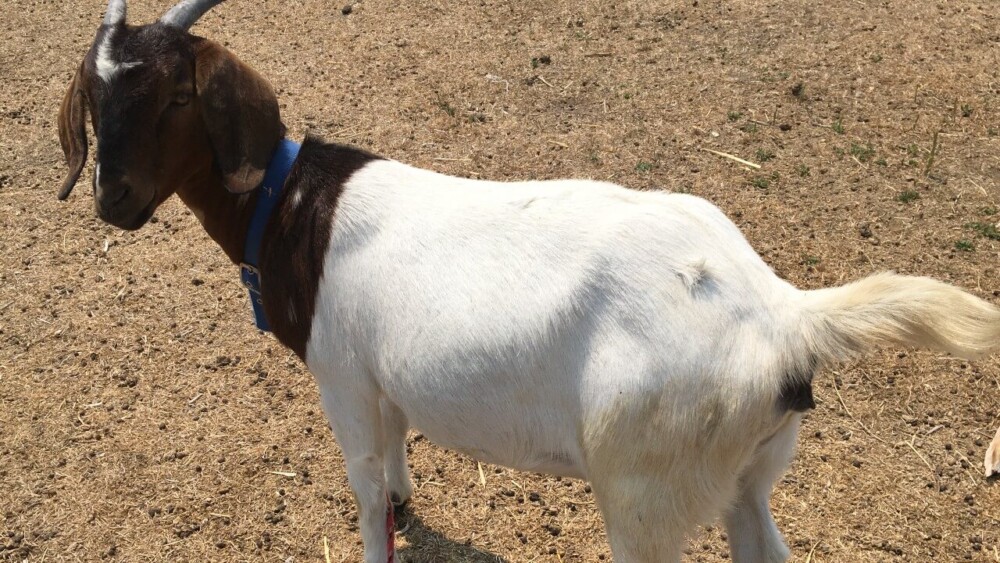 When I first got goats, I had no idea that goats have some particular nutritional needs. Contrary to popular belief, goats can’t eat anything, but sometimes they try. Goats have a very complicated digestive system that allows them to get many nutrients from grass and alfalfa.

But that sometimes means they have digestive issues. Goats can easily bloat, and bloat can quickly turn deadly.

To understand why and how to prevent it, we need to dive into their unique digestive systems.

Why the Rumen is so Important

Goats have a rumen stomach. Only animals with a rumen stomach can pull nutrients and calories out of grass or alfalfa. Unlike most other mammal’s guts, goats don’t use acid to break down food.

They use bacteria, but differently than people. Goats have multiple compartments of their stomachs, and these compartments house various strains of bacteria. The food a goat eats passes back and forth between their abdomen and them chewing on their cud. As a goat chews its cud, it creates sodium bicarbonate and breaks down the grass further.

But, when a goat doesn’t chew as much or change feed to richer foods, it overwhelms their gut. They also don’t have the chance to produce enough sodium bicarbonate.

Why do goats bloat? When goats experience a diet change, it causes different strains of bacteria to grow and become unbalanced in their digestive tract. The good bacteria are overwhelmed by these other strains. This results in extra gas (the waste of the bacteria). Goats are unable to pass gas, and so they bloat. If left unchecked, goats can die from bloat.

There are usually one of two causes of goat bloat:

Goats experience a drastic change of feed that causes bloat

Bloat occurs after a change in feed usually happens goats go from a lower-calorie food to a higher calorie food. Low-calorie foods include timothy grass, briars, brambles, leaves, and other grasses.

Alfalfa is a high-calorie and high protein food. When goats have a drastic increase in alfalfa or grain, they will usually always bloat. This can also happen in the spring when you put your goats out to pasture on the rich, new green grass. Spring grass is higher in nutrients than summer grass, although it does depend a little on the type of grass. link

They don’t tend to bloat when they go opposite, from a high-calorie to a low-calorie food. When goats have gotten used to eating a lot of grains or alfalfa, and they get out and munch on a lot of grass, they seldom get bloat.

Goats bloat when they eat a lot of grain

Goats will almost always bloat when they have a diet high in grain. This is a constant issue with many show goats or meat goats. Grains don’t require as much chewing as the grasses do, so they don’t produce much sodium bicarbonate.

Plus, a sudden grain increase will create a surplus of another kind of bacteria that isn’t good for their systems.

It is possible to feed goats mostly grain without bloat. The key is to adjust the amount of grain slowly so that the good bacteria can keep up with the change in diet. They need time to reproduce without upsetting your goat’s digestion.

Let’s cover how you can prevent goat bloat.

Goat Bloat is Possible to Prevent

You can take one of two steps to prevent or drastically reduce goat bloat.

Whenever you buy a new bunch of hay, buy it soon enough that you can mix in the new and the old hay for at least 2-3 weeks. Start with about 25% fresh hay and 75% old hay. Increase it another 25% at week 2. On week 3, increase the portion of new hay again to about 75% of your goat’s total feed.

After three weeks, you can keep mixing it until you run out of the old feed. Then, you can feed the new hay 100%. (Check out this article to understand the nutrient contents of various grasses and hay types)

This formula works great for changing to a higher alfalfa mix or for increasing their diet to grains. When I first got goats, we struggled to find grass hay for about two months. As a result, bloat was a constant concern because only alfalfa was available at the stores. If I’d had the chance, I would have bought grass hay, which my goats were used to, and mixed the new hay in for a while.

But I didn’t have that option. Even though I live in a farm community, only alfalfa was available. Plus, because of supply chain issues, even the farm supply stores could only get alfalfa bales. We were desperate. Once our goats had goat bloat, we had to treat them quickly and effectively.

But I could have avoided that if I’d known how else to stop it.

When goats face situations that can cause goat bloat, such as eating a high amount of grains, baking soda will make a huge difference.

Do goats need baking soda? Baking soda or sodium bicarbonate is naturally produced by goats when they chew. It’s an essential component that helps them to regulate the PH in their stomachs. But, goats can struggle if they have a diet high in grains or a drastic change that is too quick for their bodies to adjust naturally.

When goats have access to baking soda, it helps them keep their natural digestion without as many issues. It is still possible to bloat, even with baking soda available. It’s much better to make food changes slowly and provide baking soda.

But, baking soda can help if you aren’t able to make slower adjustments to food. One study found that baking soda helped most of the goats who were allowed to get into forbidden foods. Another study tested the effectiveness of baking soda compared to other medical drugs. Researchers gave goats enough grain to make them sick. In that study, all the goats not given baking soda died.

How much baking soda do my goats need? How frequently?

Goats should have free access to baking soda. They do not always need to eat it on a regular basis, but they need to have access to it regularly. That way, if something happens, they can eat it and prevent problems.

Do not give goats a prescribed amount unless they have bloat or you have spoken to your vet. Do not mix it with their feed to get them to eat it.
Goats are very good at self-diagnosis. They only eat baking soda when they need it. I have never seen or heard of a goat that overate baking soda. Remember, they produce it when they chew, so it’s a natural component for them.

If your goats don’t get into anything they shouldn’t or don’t have any diet changes, they may not eat much baking soda for a while.

But, once my goats got into the alfalfa bales (reserved for the pregnant goats) and ate a ton of alfalfa. They also ate a lot of baking soda that day. Without that ability, my goats would have been bloated and miserable. But, baking soda gave them the ability to control their health a little better.

You may be worried about what kind of baking soda to give your goats. It doesn’t matter the type or the brand as long as it’s either food safe or approved for animals. (Most animal baking soda that I’ve bought is food grade as well).

Although baking soda is relatively cheap at the store, you can save a lot of money by buying in bulk and storing it in a waterproof container.

I found 25 lbs of baking soda at the local Farm Supply store for just over $13. I took it home and stored it in a 5-gallon container and a plastic tub in my shed. Since it came in a bag, that will keep it dry and useable for years.

Other Uses of Baking Soda

In addition to the critical job of helping prevent and alleviate goat bloat, baking soda also has excellent benefits for goats. One study found that baking soda increased the percentage of milk fat in goats and the quantity.

That study looked at a specific diet for control measures. So, baking soda may not yield the same increased fat or yields in all diets. But, it’s worth looking at for dairy goats and nursing goats.

Goats can look bloated naturally, even when they aren’t. If you are ever unsure about whether or not your goat is bloated, ask an expert. Usually, the left side will look more bloated than the right side. If their stomach is soft, they are not bloated.

But, if you flick it with your finger and it bounces back and feels like the leather of a drum, your goat is bloated. The stomach will feel stiff and tense.

How Long Does Bloat Last in Goats? If treated quickly and effectively, bloat can reduce or eliminated within 24 hours. But, if the goat continues the same diet that caused bloat, it will remain an issue. Severe goat bloat can take a couple of days to go away completely. Longer goat bloat can cause extreme danger, especially if it’s excessive bloat.

Is Baking Soda the same as a Salt Supplement? Baking soda may taste similar to salt, but it isn’t the same as salt. Goats can tell it apart from salt and mineral blocks (study). You should not mix baking soda with salt or minerals to compel goats to eat more baking soda.

Do Goats Need A Salt or Mineral Block? Goats need a salt and mineral supplement, but a salt mineral block is not ideal for receiving the supplement. Loose salt is a much better alternative because it allows goats to consume as many nutrients as they need to be healthy. Mineral blocks often have the wrong ratios of salt to minerals for goats. Even when mixed explicitly for goats are difficult for goats to consume because a goat’s tongue is too smooth to lick the block and obtain the minerals effectively.

Is Salt Good For Goats?

Salt is an essential nutrient for healthy goats. A salt deficiency is often spotted through a dull coat or pica, which is characteristic of chewing on anything or eating dirt. Salt helps maintain healthy heart and organ health, strong bone structure, reproductive health, and a myriad of other uses in a goat’s body. Although salt alone will not produce a healthy goat, a deficiency will create an unhealthy goat. Goats need salt and other trace minerals for total health.

Until recently, I had only been a horse and hound kind of person. But one night, a goat won my heart. I was doing night duty at the yard, and the vet came out. It was late, and the vet had picked up...

Continue Reading
link to Help! My Goat looks Skinny, but I'm Feeding it.

Raising goats for either meat or milk can be a rewarding experience, but it’s not without its challenges. Although goats have a reputation for eating anything and everything, they’re also very...