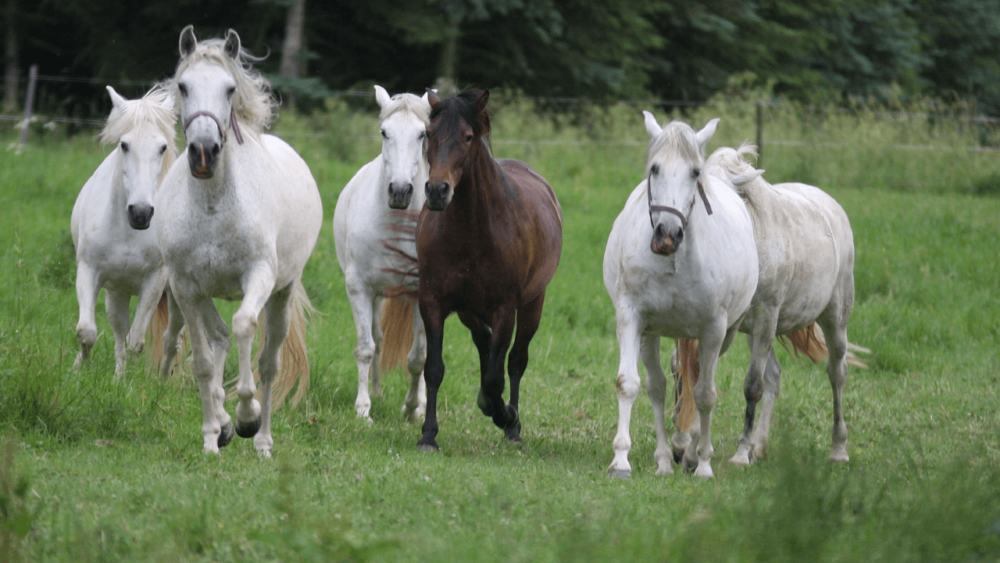 All horse owners want the best for their equine companions. Unfortunately, many modern management regimes are so far removed from a horse’s natural behavior that they cause more harm than good.

Obesity is increasingly common as stabled horses fail to get enough exercise and consume feeds that contain more starch and sugar than they would naturally digest.

Any horse that’s carrying too much weight is susceptible to several chronic problems, including laminitis, equine metabolic syndrome, and insulin resistance.

We discussed some of the nutritional challenges facing horse owners in our article on how to manage a fat horse.

Statistics indicate that around half the horses in the USA and overweight and roughly 19% of those are obese. At roughly 3.8 million horses in the US, that means around 2 million are at risk of developing insulin resistance.

Insulin resistance is a condition that prevents the body’s tissues from responding to insulin. Insulin regulates how the body metabolizes sugar. It sends the tissues instructions to absorb the glucose from the bloodstream. It also stimulates the tissues to convert that glucose into energy.

Those instructions are no longer getting through in a horse with insulin resistance. The glucose isn’t absorbed from the bloodstream but stays there, causing the blood glucose level to soar. The body’s response is to produce more insulin to get the tissues to respond to the instructions. This increase in insulin can cause clinical hyperinsulinemia, which, in turn, leads to laminitis.

Not all insulin-resistant horses will show the same set of symptoms, but you should keep an eye out for these early signs:

A blood test is the best way to get a definitive diagnosis.

We have yet to pinpoint the exact causes of insulin resistance, but the following factors are all believed to influence its development. 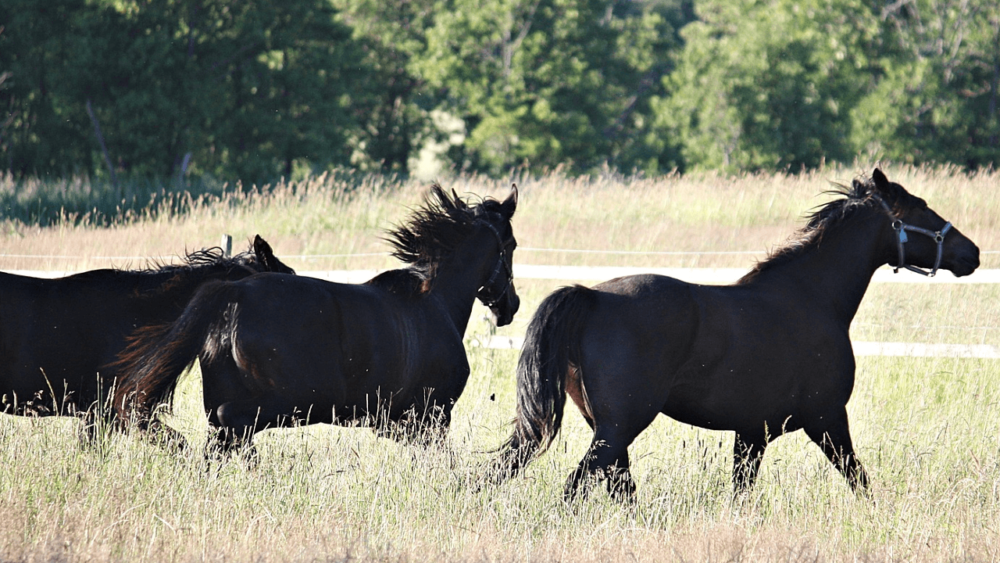 Obesity is the Number One Cause of Insulin Resistance

Obesity is strongly associated with insulin resistance because excess fat accumulation has a destructive effect on glucose metabolism. If fat accumulates in the tissue of a skeletal muscle, it also has a toxic effect on the body’s cells and their ability to respond to insulin.

This condition, known as lipotoxicity, is a significant risk factor in insulin resistance because it impairs the function of numerous metabolic pathways.

Fat can also convert inactive cortisone to active cortisol. This steroid hormone increases the glucose in the bloodstream and stimulates insulin production. Use the body condition scoring system to determine if your horse is overweight.

Age Is a Factor In Insulin Resistant Horses

Insulin resistance is associated with Equine Metabolic Syndrome (EMS), and Pituitary pars intermedia dysfunction (equine Cushing’s disease). Older horses over the age of 20 years are susceptible to developing both of these conditions. They are therefore more prone to insulin resistance.

Some Breeds Are More Susceptible to Insulin Resistance

A horse that appears to stay fat on air alone is known as a good or easy doer. These can be a blessing when food (or money) is in short supply, but they’re also more prone to obesity and its associated health problems.

Studies suggest that these breeds are naturally less insulin sensitive. The breeds, including Arabians, Andalusians, and ponies, are generally native breeds originating from harsh environments. These breeds used insulin regulation to adapt to those conditions and cope with periods of feed scarcity.

You Are What You Eat: The Link Between IR and Diet 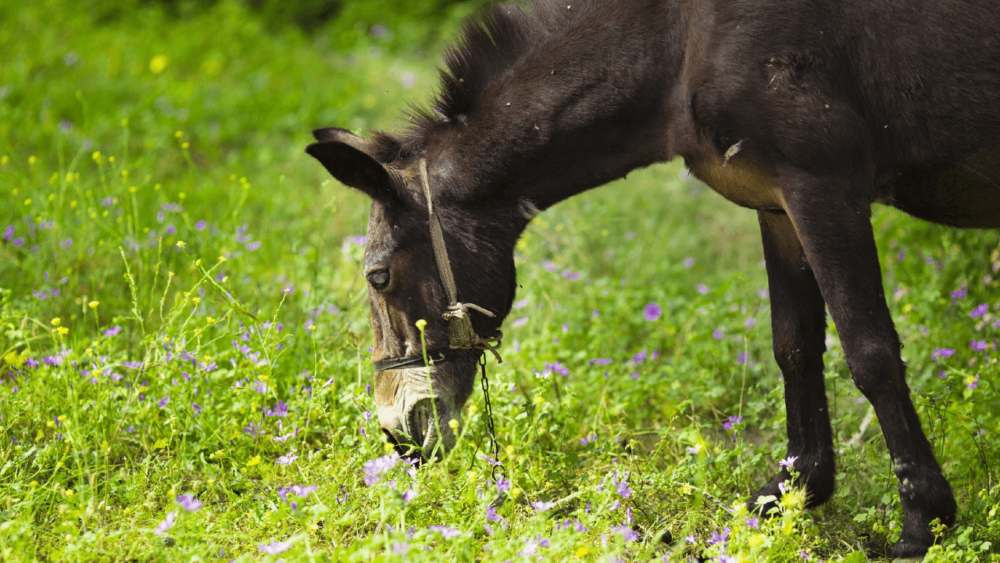 When experiencing stress or severe illness, a horse will release certain hormones, including cortisol and epinephrine, both of which stimulate the production and release of insulin.

Progesterone levels can inhibit insulin sensitivity in mares with this condition.

The Best Treatment Regime For A Insulin Resistant Horse

A good weight management and exercise program can prevent and help treat insulin resistance. It proved very effective for my mare after she piled on the pounds.

Regular exercise can increase a horse’s insulin sensitivity (how well a horse responds to insulin), whether that horse is obese or has a moderate to moderately fleshy body condition score.

How much exercise is difficult to determine. One study suggests that seven days of continuous light training can increase an obese horse’s insulin sensitivity by up to 60%. Another, performed by researchers at the Utrecht University in the Netherlands, found no increase in insulin sensitivity after 18 weeks of training.

Further research is needed, but in the meantime, a good rule of thumb is to start training your insulin-resistant twice to three times a week for 20 to 30 minutes. Begin with walking and trotting, or riding if possible, and gradually increase the duration and intensity of the workout over the coming weeks. 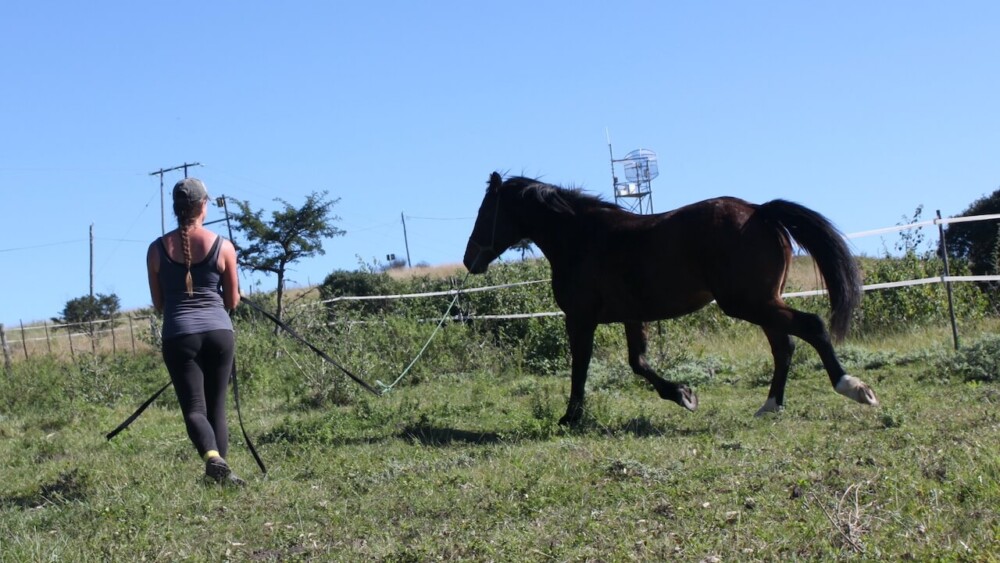 A veterinarian may prescribe a drug known as Levothyroxine to horses diagnosed with EMS as it reduces symptoms of IR and laminitis while accelerating weight loss.

How to Feed a Horse with Insulin Resistance

Diet is the most critical aspect of your treatment regime and the most complex. Theories about the best approach vary dramatically, making it difficult to establish a single, reliable protocol. Some experts recommend restricting your horse’s daily hay intake, while others claim that restricted foraging increases insulin resistance.

According to the internationally recognized equine nutritionist, Juliet Getty, restricting a horse’s access to forage is contrary to his natural behavior. In the wild, horses spend between 15 and 17 hours foraging and grazing.

An insulin-resistant horse that’s given just 1.5% of his body weight in hay each day will therefore spend much of his time bored, frustrated, and stressed. He doesn’t understand that this diet is for his own good. In fact, in his mind, he’s already preparing for a famine, which means producing hormones that help him hold onto his body fat.

Rather than helping him overcome his insulin resistance, therefore, this approach exacerbates it.

Getty argues that providing a horse with free access to “a low NSC hay” while aggressively treating his hypothalamic inflammation is a far more effective way of treating IR.

An intriguing study, published in 2014, proved just how valuable this approach could be. In the study, researchers put 14 obese, laminitic horses on a diet of free choice Bermuda grass hay. They eliminated all other feeds from the horses’ diets and restricted their grazing.

The 14 horses started with a median body conditioning score of 8.5. Twenty weeks later, this median had dropped to 5. In other words, they lost all their excess weight in just five months.

The Best Hay and Feeding Regime for the Insulin Resistant Horse

Sugar and starch exacerbate Insulin resistance, so horses with his condition need hay that’s low in nonstructural carbohydrates. The ideal hay should contain no more than 12% NSC, but this isn’t always easy to find. Legume hays tend to have lower levels of NSC (averaging 11%) than grass hays, which average around 13%. However, the only way to know the exact NSC content is to get the hay tested.

Soaking or steaming your hay before feeding also helps to lower its NSC content. Research indicates that soaking removes sugars, water-soluble carbohydrates, and some starches. A study performed by researchers at the University of Minnesota found that soaking hay for 30 minutes in warm water or 60 minutes in cold water can reduce the water-soluble carbohydrate content by around 27%.

Steaming isn’t quite as effective at reducing NSC but prevents mineral loss. Research suggests that it also improves the bioavailability of those minerals that are crucial for hoof health.

Unfortunately, you need a specialized hay steamer to perform this process effectively, and they don’t come cheap!

Once you’re confident that your hay has suitable NSC content, offer it to your horse in small piles in lots of different locations. Distributing it like this will encourage him to exercise as he forages and stimulate his natural seeking behavior. 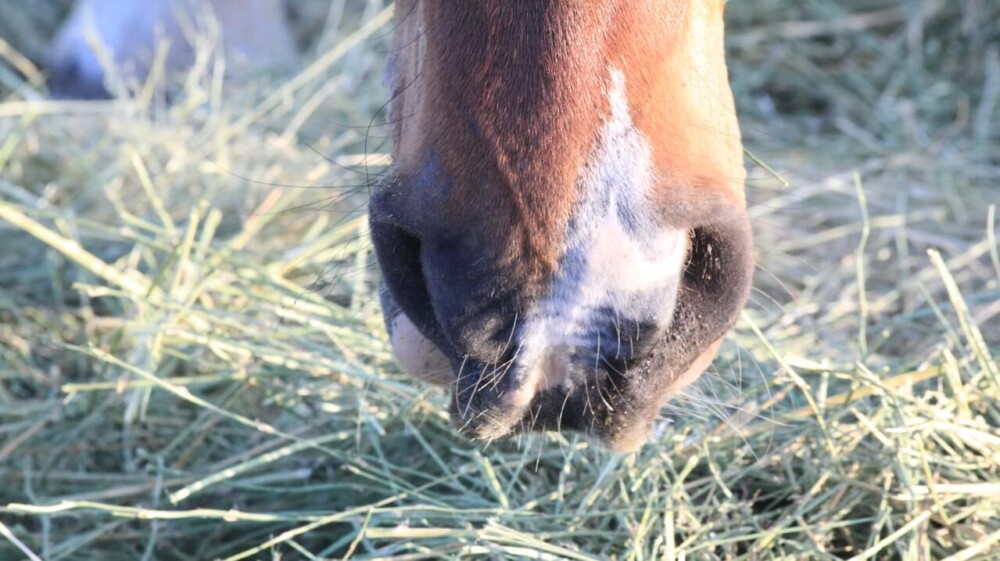 Feeding the Feet of the Insulin Resistant Horse

One of the most significant issues with insulin resistance is the horse’s increased likelihood of contracting laminitis. As nutrition is key to hoof care, the IR horse needs a well-balanced diet that provides all the nutrients he needs for healthy hoof growth. These include:

Foods that Help Reduce Inflammation in the IR Horse

Removing stress from your horse’s life is the first step towards treating insulin resistance. But, as Getty points out, the horse will still struggle due to “the residual hypothalamic inflammation.” Your horse’s condition will only improve if you treat this inflammation. You can do this by removing sugar and starch from his diet and introducing anti-inflammatory herbs, antioxidants, and the correct balance of omega fatty acids.

A good-quality prebiotic helps to increase nutrient absorption and stimulate hindgut function. Your horse uses his hindgut to digest fiber and convert it into energy. It also boosts his immune system, so is critical for his recovery.

Probiotics may be equally beneficial for horses that aren’t pasture grazing as they substitute the microbes and minerals the horse would usually get from the ground.

The Consequences of Insulin Resistance in Horses

The most devastating side effect of insulin resistance is laminitis. If left untreated, this can cause such debilitating pain that the horse must be euthanized.

Other consequences are less clear-cut, says Nicholas Frank, a professor at Tufts University’s Cummings School of Veterinary Medicine. Although he says, obesity associated with IR can cause fatty tumors, wear and tear on the bones and joints, and possibly reproduction issues. 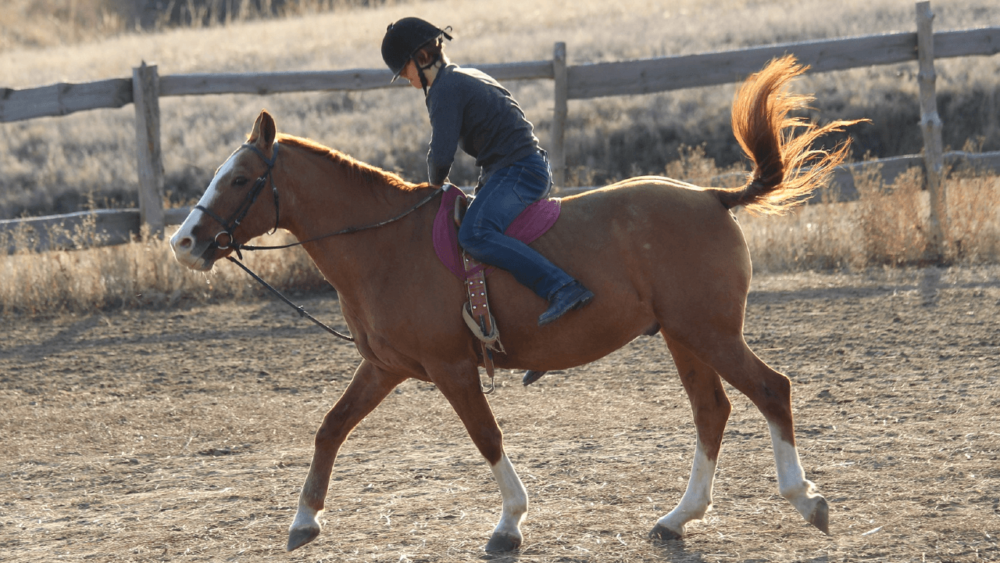 By identifying which genes are associated with insulin resistance, researchers believe they could “breed it out of some lines of horses.” Others hope to block the hormones that stimulate the over-production of insulin and treat the condition that way.

Meanwhile, a group of researchers led by Andrew van Eps, an associate professor of equine musculoskeletal research at the University of Pennsylvania’s School of Veterinary Medicine, is looking into a drug that interrupts insulin’s adverse effects on the horse’s hooves.

Insulin resistance is relatively common among overweight horses. It’s a serious condition that causes hypothalamic inflammation and increases the risk of laminitis. With the proper treatment and nutrition plan, insulin-resistant horses can make a full recovery and maintain a healthy state for the rest of their lives.