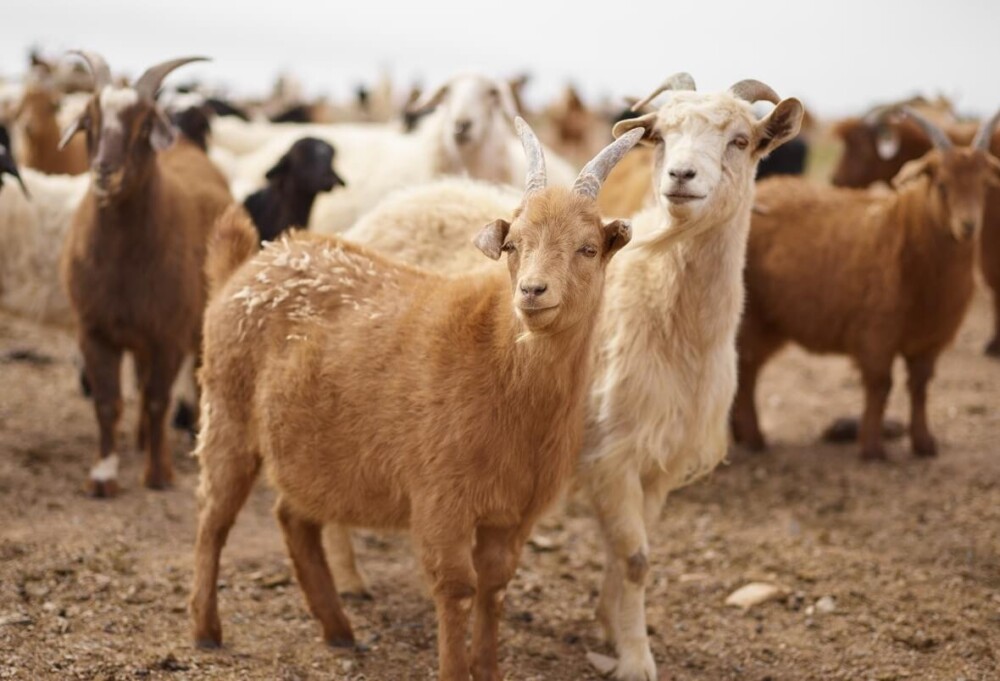 Can you get rabies from a goat? People can get rabies from an infected goat. In 2019, nine people were treated for rabies when they handled a rabid goat. Goat rabies is rarer than other animal forms of rabies and can be prevented through vaccination and preventative measures such as separating herds from contact with wildlife.

In 1996, a 4H goat got sick on the last day of the fair (NY Times). The owner, a little girl reached out to pet it and it nipped her thumb. She instinctively put her thumb in her mouth, the worst possible reaction.  After the goat became sick, it was tested and confirmed to have rabies. As a result, thousands of people were screened and 467 had to undergo a series of rabies shots. It cost the county over $500,000.

There are a few important facts to know about the threat of rabies to your goats. Goat vaccination guide here.

Symptoms of Rabies in Goats

Rabies is very widespread across the United States. In New Jersey alone, there are over 300 cases of rabies each year (New Jersey Extension). Eastern states have typically seen higher rates of rabies in the USA. In western states, rabies has started occurring occasionally in goats even though previously it was unheard of. European countries have a little higher rate of rabies because of the transmission through wild animals from countries that don’t proactively fight rabies as much.

There are two forms of rabies: dumb and furious. Furious rabies is what most people associate rabies to be. The animal becomes more aggressive and is more likely to attack or bite. Bite

Although most goats don’t bite people, some goats do naturally bite due to playfulness or aggression. If you have a goat that is not a biter and then starts biting, rabies may be the cause.

I and my family have never been bitten by any of our goats. However, when we had Nubian goats, they did occasionally bite our hands when we were feeding them, but not as an act of aggression.

Goats can also show increased aggression through head butting. Goats usually get the furious form of rabies instead of the dumb form.

Dumb rabies manifests itself in animals by making them calmer. Farm animals can often get dumb rabies so if you have a goat that’s always been a little skittish and it gets calm suddenly, its a good idea to have it checked for rabies. Wild animals that seem unusually calm will usually have rabies as calmness toward people isn’t normal in the wild.

Preventing Rabies In Goats and Other Livestock Through Isolation from Wildlife

Protecting your goats is important. There are general safeguards you should take even if you don’t live in a high rabies epidemic area. Many of these precautions will help to protect your goats and animals from other easily transmitted diseases.

Protect your goats from wildlife by preventing interactions with wild animals. Goats are prey animals so it’s a good idea to protect them because coyotes, foxes, and cougars can kill goats. Skinks are the biggest spreader of rabies among farm animals. Keep your herd protected through good fencing and housing that keeps wildlife away. Wild animals are the biggest source of rabies for farm animals.

Report animal bites to your local Animal Control. They can inform you of whether or not rabies is currently prevalent in your area. If your goat or farm animal is in a fight with another animal, call your vet as your goat may need a booster shot. People who are exposed to rabies can get medicine to prevent rabies spread, but animals don’t have that option. Rabies develops faster in animals and is always deadly.

Do goats need rabies shots? In areas where rabies is rampant, vets will usually recommend that your goats get vaccinated. Goats can get rabies from other farm animals, but more frequently will get it from a wild animal. Squirrels, chipmunks, cats, skunks bats, foxes, and raccoons are the more common carriers of rabies. Skunks and bats are the most common transmission to goats.

When goats get rabies, it’s usually from a bite of an infected animal, but other body fluids that come in contact with an open wound could also transmit it. Goats can transmit rabies from one goat to another through roughhousing. However, rabies in goats is rarer. It is more common in other animals such as cats. That’s probably because cats are more likely to get into a skirmish with a wild animal than a goat is.

Rabies vaccinations should be given to kids over 3 months of age and annually thereafter.

How long does rabies take to develop? In people, rabies takes 1-3 months to develop. Scientists don’t know how long it takes to develop in goats because it’s rarer and difficult to track from the infection time to the first symptoms. Usually, once a goat starts developing symptoms, they die within a week to ten days. Owners often don’t realize that a goat has been bitten and aren’t aware of the potential danger.

What makes rabies deadly in animals but not humans? Rabies is deadly to both animals and humans. However, because people are able to communicate when they have exposure, usually an animal bite, they can start treatment for rabies long before symptoms develop. Once symptoms develop in either people or animals, it is deadly and too late to reverse the disease. Rabies treatment involves a series of shots that alerts the body to create antibodies against rabies at a faster rate than the disease naturally develops. This prevents the development of rabies in people.

Is there a cure for rabies? Sadly, rabies is always fatal. Once a goat has contracted rabies, it will die and if left to die naturally, it will be a painful death. Rabies is a neurological disease so it affects mood, coordination, and body functions. Death usually occurs within 1-2 weeks of when symptoms develop.

Tetanus and Overeating Disease in Goats: Prevention and Treatment