Pigs love food. If given a chance, they’ll spend all day eating. If that isn’t an option, some pigs sit and chew as though dreaming of the food they wish they were eating.

Why do pigs chew all the time? Stressed pigs often chew on nothing, although persistent chewing can signify boredom, paid, or stress. Pigs that don’t get the chance to forage may demonstrate abnormal oral behaviors, such as sham chewing or gnawing on the bars of their enclosure.

Your Pig Isn’t Chewing Its Cud

A pig may look like a cow chewing its cud, but that’s not what’s happening when a pig chomps or chews. Cows are ruminants, but pigs aren’t so they don’t have cuds. Ruminants have a complex digestive system in which their food enters several different stomachs or compartments.

When a ruminant eats, it initially stores the food in a special pouch. From there, he regurgitates it and slowly chews for a second time before moving it onto the next compartment.

Pigs have simple stomachs like humans, so don’t regurgitate their food or chew their cud.

Reasons Pigs Chew on Nothing

Pigs That Can’t Forage Chew Instead

Pigs kept in enclosures where foraging isn’t an option often develop abnormal oral behaviors. These include sham chewing, which looks like a cow chewing its cud. A pig that’s sham chewing will chew and chomp even though there’s nothing in its mouth.

Even though these pigs get the nutrition they need, their behavioral needs are not satisfied. It’s natural for a pig to root and scavenge for food. Studies show that wild pigs spend around 43% of their time foraging and rooting – nearly four hours a day.

A pig that lives in an enclosure and eats two meals a day spends less than an hour eating, suggesting that chewing could result from frustration at their inability to forage naturally. Alternatively, it could be “appetitive behavior” linked to hunger or a desire for food. 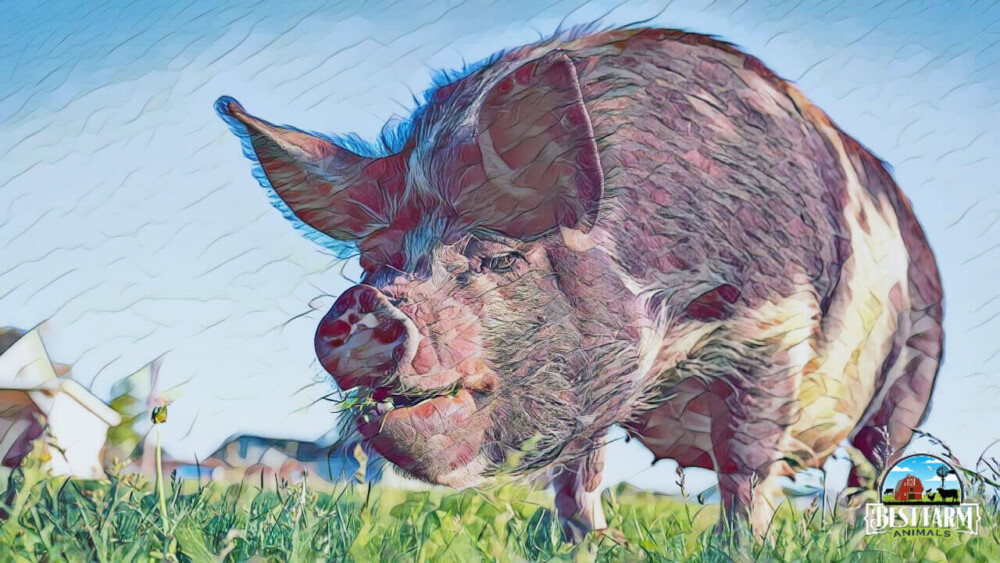 A sow that sits and chews on nothing could be trying to boost her cortisol production. Researchers have found that chewing stimulates the production of cortisol, helping to regulate the sow’s response to stress.

Sham chewing is most common in sows that are about to farrow. Farrowing is the process of a sow giving birth to a litter of pigs and is one of the most stressful events in a sow’s life, so chewing behavior could be a way to increase cortisol and reduce stress.

Not only can sham chewing reduce stress in the sow, but it also has a positive effect on the piglets.

A study published in the Frontier Veterinary Science journal in 2019 identified a link between sham chewing sows and decreased fear responses in their piglets.

Piglets born to sham chewing sows appear to benefit from the higher cortisol levels in the placental tissues.

In this instance, chewing is a positive behavior rather than an abnormal or unhealthy one.

Boredom Can Cause a Pig to Chew

Pigs are intelligent creatures that need a lot of mental stimulation. If they don’t get that stimulus, they may start chewing on their enclosures, buckets, troughs, and anything else they can get their teeth into. In these circumstances, chewing is an unhealthy, abnormal behavior that indicates that the pig’s behavioral needs are unfulfilled.

3 Ways to Stop a Pig from Chewing

Whether your pig’s chewing out of boredom, hunger, frustration, or stress, there are ways to tackle the problem. Providing your pigs with forage opportunities, toys, or additional roughage can help to alleviate their natural chewing needs in a healthy manner.

#1 A Foraging Pig won’t Chew as Much

Enriching your pig’s environment by adding in materials it can root through will meet this instinctive behavioral need. Once the pig is more satisfied, its need to chew will diminish.

A pile of compost in one corner of the enclosure or a bale of straw with some apples hidden within it can give a pig hours of entertainment, during which he won’t even be thinking about chewing.

You can also try feeding your pig several smaller meals during the day. Doing this will keep him occupied for longer than one large meal and give him more mental stimulation.

Pigs are very food-oriented, so they aren’t usually interested in dog toys or chews. Treat balls are a great way to distract a chewing pig. Fill a Kong with peanut butter, and your pig will spend most of the morning rolling it around as he tries to lick the sticky treat inside. Hiding food in a foraging box is another way to stimulate his natural curiosity and allow him to act out his innate desire to explore. 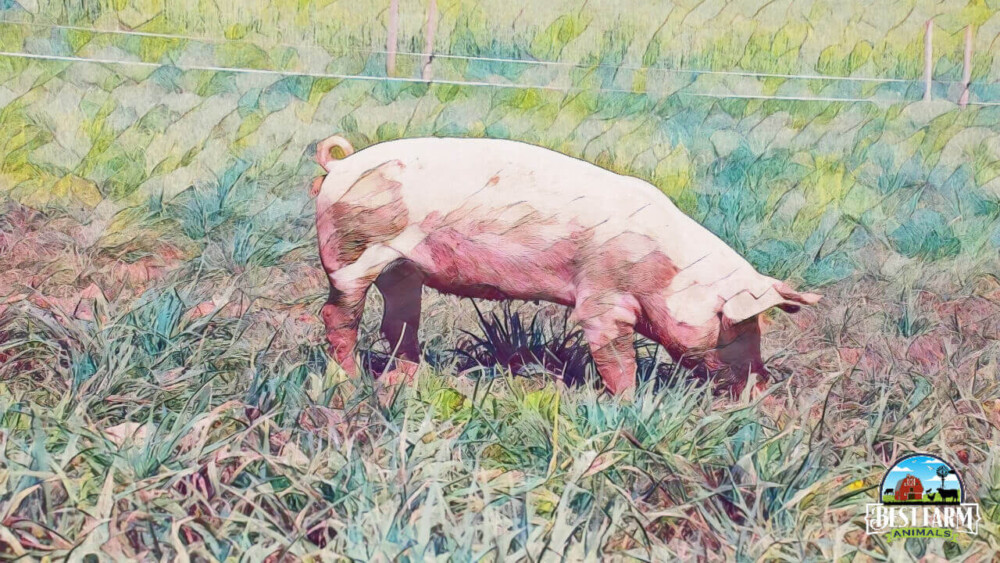 Sham chewing may help to reduce stress but not if it’s associated with a feeling of hunger. Hunger will cause a pig more stress than any amount of sham chewing can alleviate. If you’re already meeting all your pig’s nutritional needs, giving him additional forage might be the best way to convince him that he’s had enough to eat without making him obese.

Although commercial pig farmers prefer high protein roughage, like alfalfa, this is necessary for a pet pig. Giving him some straw to rummage through and chew on could be all she needs to end her stress-related sham chewing. Not only that, but the digestive products of fibers also help the sow feel more satisfied and calm.

What To Do When Pig’s Chomping, Not Chewing

Pigs sometimes chomp or chew noisily, often foaming at the mouth simultaneously. I’ve seen pigs do this when they know their next meal is on its way.

Some pigs demonstrate chomping behavior when introduced to a new companion as if trying to communicate or flaunt the size of their teeth.

If the chomping is accompanied by a hunched back and the hair on the back of the pig’s neck standing up like a mohawk, it’s most probably a challenge and a form of aggression.

In other situations, chomping of the mouth may be an indication of fear or stress. Either way, chomping is often associated with aggression, so if a pig acts that way towards you, you need to nip it in the bud immediately.

What It Means If Your Pig Grinds its Teeth

Pigs do all sorts of things with their mouths, chewing, chomping, and even grinding their teeth. A pig may grind its teeth for several reasons: stress, pain, teething, contentment, and boredom. 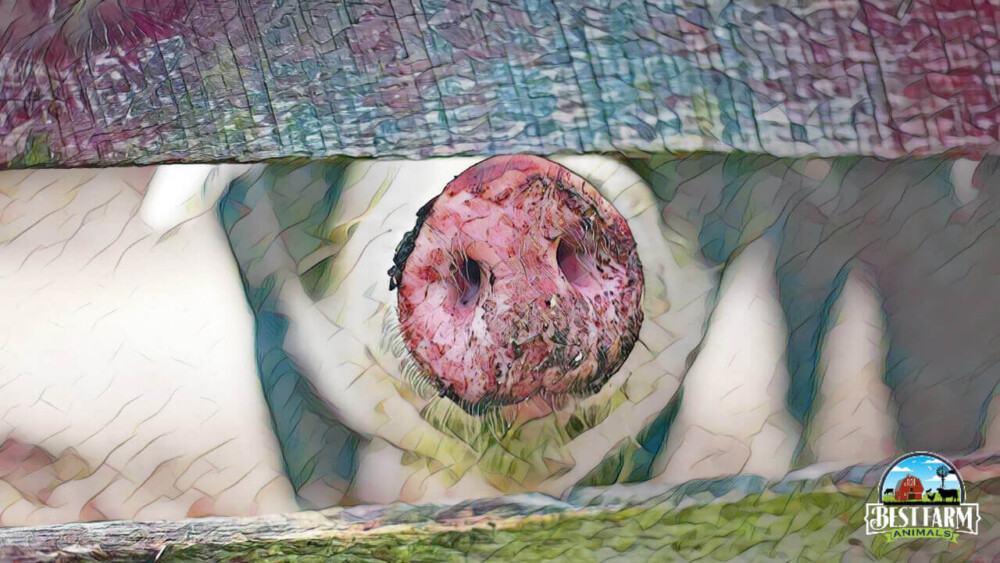 A stressed or irritated pig will grind its teeth so loudly that it almost sounds like chomping. Instead of rubbing their teeth together, they smash them into each other. This type of tooth grinding is often accompanied by other signs of anger or frustration, such as squealing and head shaking.

A Clenched Jaw Suggests Your Pig’s in Pain

A pig in pain may clench its jaw the same way we might. This kind of grinding is much quieter and gentler than the type associated with stress or anxiety.

There may also be other signs of discomfort, like lethargy or a lack of appetite. If you can, check your pig’s teeth thoroughly, ensuring there’s nothing stuck there. Also, look for any swelling or redness which could indicate an abscess.

A pig that’s grinding its teeth may be experiencing other health issues. Teeth grinding could be a sign of heart disease or gastric ulceration. Even broken limbs could cause such behavior.

If the symptoms persist or worsen, schedule a visit with the veterinarian.

Like humans, piglets get a set of baby teeth, most of which are replaced by permanent teeth between the ages of 8 and 20 months.

Pigs that are losing their baby teeth grind loudly. A pig grinding away at a loose tooth sounds like he’s eating rocks! As those loose teeth fall out, the permanent ones will start to erupt. This process causes the pig pain, and he may use grinding to alleviate that discomfort, in the same way as we might push down on a sore or erupting tooth.

At this point, the grinding becomes much quieter and may even make a squeaky noise as the gums rub together.

A teething pig will usually grind for a couple of weeks without showing any of the other symptoms associated with different types of teeth grinding. You can help alleviate some of the pain by making your pig frozen treats with pumpkin, fruit juice, or pulped vegetables.

Pigs that can’t perform their natural behaviors and lack mental stimulation quickly become bored. They may try to alleviate that boredom by chewing or grinding their teeth.

The best way to remedy this is to follow our earlier tips of providing forage, toys, or roughage for your pigs to chew on. Forage, roughage, and toys can all help stimulate your pig’s natural behaviors, making him less inclined to grind his teeth.

A contended pig may grind its teeth slowly and methodically. Some people refer to this behavior as “piggy purrs.”If you’re giving your pig a belly rub or a scratch, and he starts rhythmically grinding his teeth, it’s a sign of complete contentment. When this happens, the rest of his body will be completely relaxed, and there will be no signs of stress or tension.

This type of teeth grinding is a natural, positive behavior that should be encouraged.

When your pig is excessively chewing or choping, it can indicate an abnormal oral behavior indicative of an underlying problem. While chewing may not be natural, it’s not generally associated with poor health or body condition. Enriching your pig’s environment should reduce such actions and encourage your pig to perform natural behaviors like foraging instead.