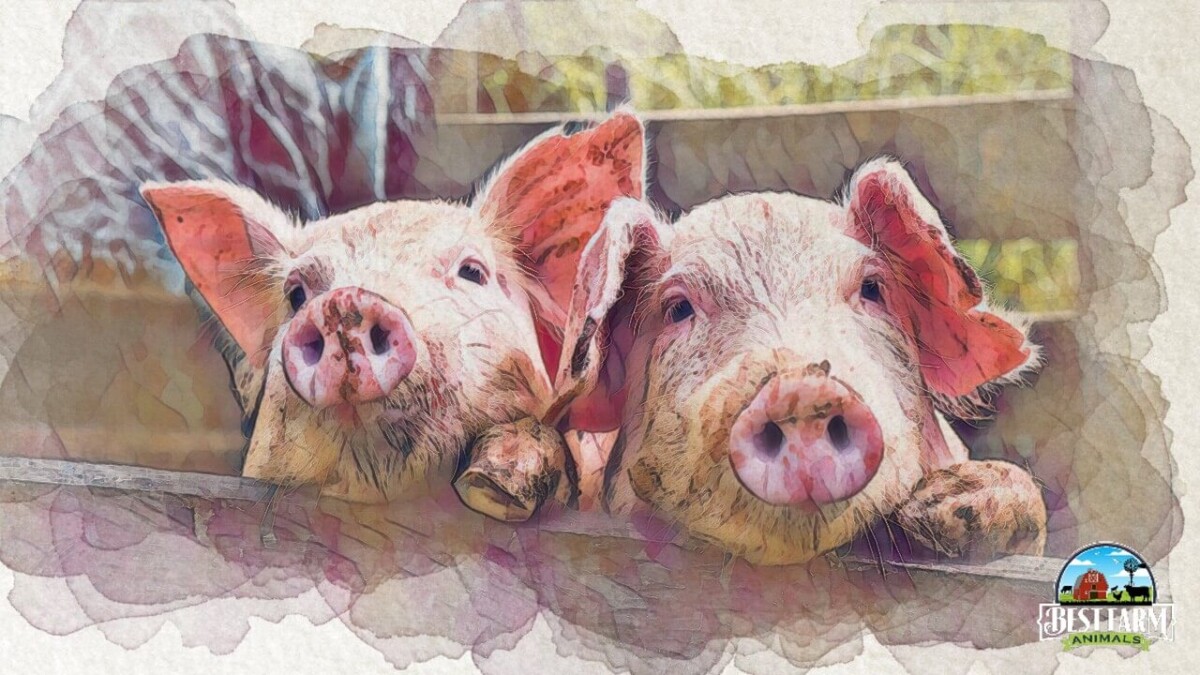 Pigs are omnivores capable of eating a wide variety of foodstuffs. Although they eat insects and other meats, over 90% of their diet is vegetarian, consisting of fruits, vegetables, and other plant matter.

Domestic pigs get most of their nutrition from commercial grain feeds, but supplementing this with carefully selected fruits and vegetables can boost your pig’s nutrition.

Although pigs are notoriously indiscriminate about what they eat, trying almost anything that comes their way, studies show that some vegetables harm a pig’s protein digestion capability.

Pigs love green, leafy vegetables, including those that belong to the cruciferous family of plants. All 400 different types of cabbage belong to this family, along with Brussels sprouts, broccoli, cauliflower, bok choy, kale, radishes, and turnips.

Pigs can eat all cruciferous vegetables and get some health benefits from them. Some of these vegetables are also potentially toxic and could negatively impact the animal’s growth rate and weight gain.

Cabbages are Highly Nutritious for Pigs

Can pigs eat cabbage? Cabbages are one of the most nutritious vegetables you can offer a pig. They are rich in fiber and packed with vitamins and nutrients. Including cabbage in your pig’s diet boosts its digestive system and increases its disease resistance, but some parts of the plant are toxic.

All varieties of cabbage have a high fiber content of around 1 gram per 10 calories. Studies show that fiber has “prebiotic effects in pigs,” stimulating their gut health. Eating foods with a high fiber content also helps to prevent constipation and makes your pig feel fuller quicker.

A high-fiber diet also improves growth and welfare in young pigs and boosts the reproductive efficiency of mature adults.

Parts of the Cabbage are Toxic to Pigs

Of these, only the leaves are edible for pigs. Humans can also eat cabbage stems but rarely do, despite being packed with nutrients.

As nutritional as they may be for humans, cabbage stems are potentially toxic to pigs, as are the roots and seeds. My research into the toxicity of cabbage flowers drew a blank, but I wouldn’t recommend feeding them to your pig, just in case.

All these parts of the cabbage contain substances known as glucosinolates. When pigs chew on a cabbage stem or root, the glucosinolates break down, producing a range of substances that can potentially disrupt the pig’s thyroid function.

Studies have also found that these glucosinolate products increase the liver size and reduce growth performance.

The concentration of glucosinolates in cabbages is relatively low, especially when compared to canola oil, so it’s unlikely to impact your pig’s health unless fed in high quantities. We recommend removing the cabbage leaves from the stem before offering them to your pig. Many pigs seem to relish the bitter taste of raw cabbage leaves, although my pig Hamilton shows little interest in them unless they’re chopped up and cooked.

Raw cabbage leaves are higher in vitamin C, while cooking increases its calcium content. Either way, the leaves should be washed and removed from the stem before feeding.

Red cabbages are even more nutritious than green ones. They contain more vitamin A, which pigs need to support their tissue development, reproduction, and vision.

Minipigs might be small, but their digestive systems and appetites resemble standard-sized pigs. Minipigs might struggle to eat a whole cabbage leaf, but they’ll give it their best shot!

To make cabbage more palatable for your mini pig, chop it up and cook it if you’ve got time. You could even mix a few chopped-up cabbage leaves into your mini pig’s usual meal of grain to add a little flavor and nutrition. ,

Broccoli is a Superfood for Pigs

Can pigs eat broccoli? Pigs love the crunchy freshness of the broccoli’s leaves and stems and will happily eat them either raw or cooked. Broccoli is a superfood for pigs, as it’s nutritious, high in protein, and bursting with vitamins and nutrients. The stems and seeds of the broccoli plant are potentially toxic to pigs.

Pigs can Eat most parts of the Broccoli Plant

Humans tend to restrict themselves to eating the head of the broccoli plant and cutting off the stalk. Pigs are more intelligent than us because they’ll eat the nutritious stems just as enthusiastically as the crown.

At this point, the pig’s love affair with broccoli ends. A broccoli plant’s seeds and roots contain polyphenols and glucosinolates. These compounds aren’t entirely beneficial to the pig, with one study finding that pigs fed 600g of raw broccoli a day sustained 27% more DNA damage to their colonocytes than those on a grain-only diet.

Coloncytes play a critical role in the pig’s digestion, ability to absorb nutrients, and offer protection against microbial infections.

Strangely enough, frozen broccoli “had no significant effect,” so if you’re planning on feeding your pigs a lot of broccoli, you might want to blanch it first and then freeze it. On a hot summer’s day, your pig might want nothing better than a bundle of frozen broccoli!

There are approximately 15 different types of potbellied pigs, all of which can safely eat the leaves and stems of broccoli.

You could even try out different varieties of broccoli, seeing if your pigs prefer the nutty flavor of the Romanesco or the more peppery taste of the Purple Sprouting variety. Pigs enjoy the crunchy stalks and tender dark leaves of the bok choi. A type of Chinese cabbage, bok choi is rich in vitamins C and K. It boosts your pig’s immune system and bone health. Bok choi is also full of fiber which has a prebiotic effect, stimulating the pig’s digestive health. Bok choi is best fed raw as cooking diminishes vitamin C and K levels.

Potential Dangers of Feeding your Pig Too Much Bok Choy

Although no scientific evidence indicates that pigs will suffer if they eat too much bok choi, it contains an enzyme that, in humans, can potentially lead to hypothyroidism.

Pigs don’t suffer from hypothyroidism, but you should still monitor the amount of bok choy your pig eats, limiting it to around 20% of your pig’s total daily ration.

Mini-Pigs and Potbellies Enjoy All Varieties of Bok Choy

Mini-pigs and potbellies will happily consume bok choy, pak choy, choy sum, and other varieties of Chinese cabbage. All parts of the plant are edible, including the roots, buds, and flowers. Cauliflower Has Some Nutritional Benefits for Pigs

Pigs can eat raw, cooked, or fermented cauliflower, but only in moderation. Cauliflower is rich in fiber and contains high levels of vitamin C and K. No research has been done into the effect of too much cauliflower on a pig’s digestive system. Still, it’s possible that eating cauliflower in large quantities could cause bloat and other gastrointestinal issues.

Theoretically, as cauliflower contains glucosinolates, it could cause similar problems to those associated with broccoli. As a result, it’s best only to feed your pig the head and leaves of the cauliflower, avoiding the roots and seeds.

A study performed in China last year found that including fermented cauliflower in the diet of nursery pigs improved growth performance, decreased the occurrence of diarrhea, and enhanced immune function.

Fermenting cauliflower is a simple process that takes a few days to complete. It reduces the vegetable’s goitrogen content, making it safer for the pig to consume. It also introduces “live probiotics and enzymes” into your pig’s diet.

I would only recommend fermenting cauliflower if, for some reason, you have an excess of the vegetable. In general, cauliflower doesn’t contain enough health benefits to justify the time and effort needed to complete the fermentation process.

Kale is a Good Winter Food for Pigs

“Kale is a nutrition superstar” for pigs, just like humans. It is high in vitamins A, B6, C, and K and is also a good source of digestible calcium, which is essential for a pig’s growth. Pigs find kale leaves surprisingly palatable, as this video illustrates.

According to one study, including kale in your pig’s diet over winter can “reduce feeding costs, benefit gut health, immune system, reproductive traits, and welfare.”

Although the leaves of the kale plant are beneficial to the pig, its roots contain higher levels of potentially harmful glucosinolates.

Pigs can Eat other Cruciferous Vegetables

Other cruciferous vegetables that are safe for pigs to eat include:

You can learn more about what vegetables are suitable for pigs in our Healthy Vegetables For Pigs article. Hogs can safely eat the heads and leaves of cabbages, but you should remove the stems and roots as these contain potentially dangerous levels of glucosinolates.

Potbellied pigs enjoy the nutritional benefits of cabbages as much as any other variety of pig.

Pigs can eat the stems and heads of the broccoli plant quite safely, but you should avoid feeding them the roots and seeds.

Mini pigs enjoy broccoli just as much as hogs or meat pigs. You may want to chop it into smaller pieces to make it easier for your mini pig to consume and to reduce the risk of choking.

Can Pigs eat all Parts of the Bok Choy?

All parts of the bok choy plant are safe for pigs to eat, including the roots and seeds.

Some potbellied pigs enjoy snacking on cauliflower, especially the crunchy stems, heads, and leaves, while others may turn their noses up at it. Cauliflower is edible for potbellies but may not be their favorite vegetable.

Kale is a nutritious treat for mini-pigs. It boosts their immune system and can help skinny mini-pigs to gain weight.

Whether you plan on including cabbage, broccoli, kale, or bok choy in your pig’s diet, only feed them in moderation.

Cruciferous vegetables like cabbage, kale, broccoli, and cauliflower are all healthy additions to every pig’s diet, as long as they never exceed around 20% of its daily intake.