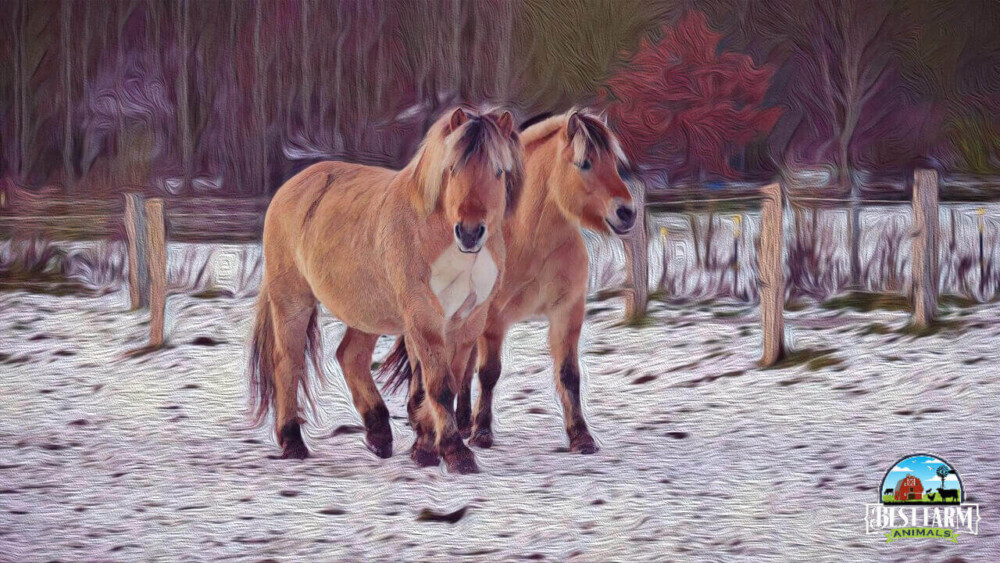 Norwegian Fjords are one of the oldest horse breeds in the world. Domesticated some 3000 years ago, the Norwegian Fjord’s sturdy build and calm temperament have seen it excel in almost every discipline.

Once a Viking war horse, the Norwegian Fjord became a highly valued draft horse, pulling heavy loads around the hilly farms across Norway.

These days, people breed Norwegian Fjords for both riding and driving. The breed performs well in dressage, showjumping, and endurance competitions and is used extensively in equine therapy programs and riding schools.

The Versatility of the Norwegian Fjord Horse

At 13.2 to 14.2 hands high, the Norwegian Fjord horse is small enough to be ridden by children but strong enough to carry an adult male. Their friendly, calm personalities make them suitable for children, while their strength and stamina make them excellent trail horses.

They are known for their calm temperaments and natural curiosity. Fjord horses are sure-footed and willing to work. They’re also quick to learn and surprisingly adaptable.

Norwegian Fjords are tractable and quiet-tempered but also strong and tireless, making them ideal for many disciplines.

The natural agility of the Norwegian Fjord means they can maintain a surprisingly fast pace over challenging terrain, making them suitable for long-distance adventures and endurance rides. 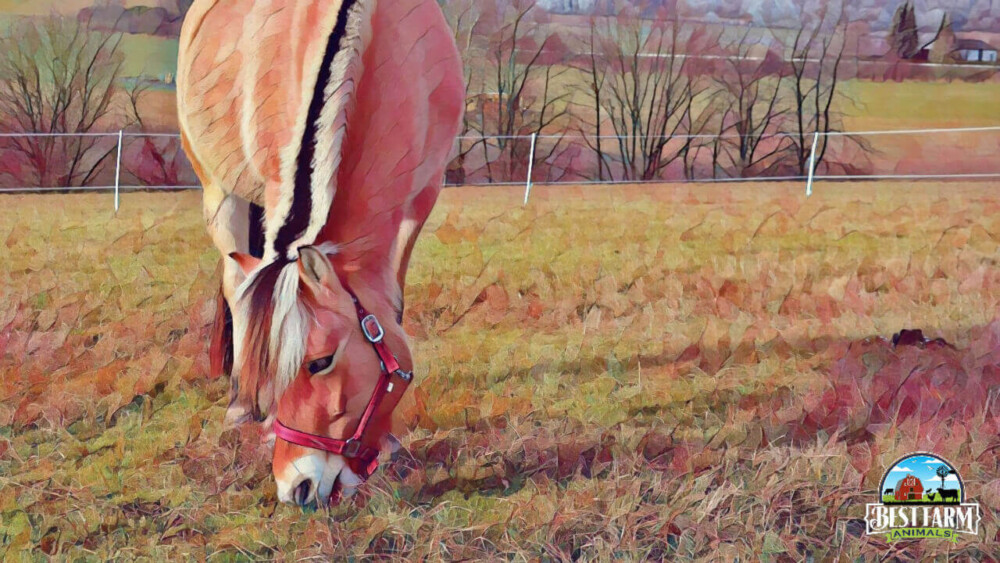 Fjords Compete in Many Different Disciplines

Norwegian Fjords excel in numerous disciplines, including combined and pleasure driving, eventing, Western performance, pleasure and trail riding, and equine therapy. They have also proved themselves in the showjumping and dressage arenas.

With their short necks and heavy builds, Norwegian Fjords may not look like your typical dressage horse, but they’ve been successfully showing off their paces in the dressage ring for years.

International-level dressage rider and trainer, Lauren Chumley, says she “used to get a lot of weird looks when I showed them over at the Adequan Global Dressage Festival, but I have no shame.”

According to Chumley, Norwegian Fjords may struggle a bit with the bending needed to complete a successful dressage test, but they more than makeup for it in other ways.

“Fjords are super sound,” she says. “They don’t have many medical problems, and we don’t even put shoes on them.”

Fjords Make Excellent Beginner Horses (Most of the Time)

The Norwegian Fjord Horse Registry states that the breed standard is “cooperative, dependable, willing and calm in most situations and have natural, well-balanced movements.”

Not only that, but the Fjord Horse should also “be easy to handle and suitable for family use in different activities as in riding schools, competitions and for leisure.”

Their gentle nature and natural balance make them ideal for children and beginners, although their love of food sometimes gets in the way.

On the other hand, it can be challenging to negotiate with 900 pounds of horse flesh when it decides that eating’s a better option than working.

Despite their love of food, Fjord horses are generally well-behaved and calm. They are tolerant of inexperienced riders and quick to forgive beginners’ mistakes.

The general rule of thumb is that horses can carry a rider that weighs up to 20% of its own body weight.

The average American man weighs less than 200 lb, so they could easily ride a Norwegian Fjord without causing it any discomfort.

Norwegian Fjords aren’t particularly tall, rarely exceeding 14.2 hh, so they are better suited to smaller adults. A rider over 6 feet tall won’t just look a little odd on a short horse, but they can also offset that horse’s center of gravity, forcing the horse to compensate by adjusting its footing.

The best way to determine if a Norwegian Fjord horse is suitable for someone of your height is by measuring your inside leg length.

This calculation gives you a good idea of how far your leg will hang down the horse’s flank. Someone with an inside leg measurement of around 34 to 36 inches will look perfect on a stocky Norwegian Fjord, while one with a longer leg of 38 to 40 inches would do better with a taller breed.

Even if you feel you’re too tall to ride a Norwegian Fjord, you don’t have to turn your back on the breed altogether.

Norwegian Fjords are just as enjoyable in harness as they are under saddle. According to the statistics we gathered for our article on how much weight a horse can pull safely, a Norwegian Fjord can comfortably pull up to half its own body weight. 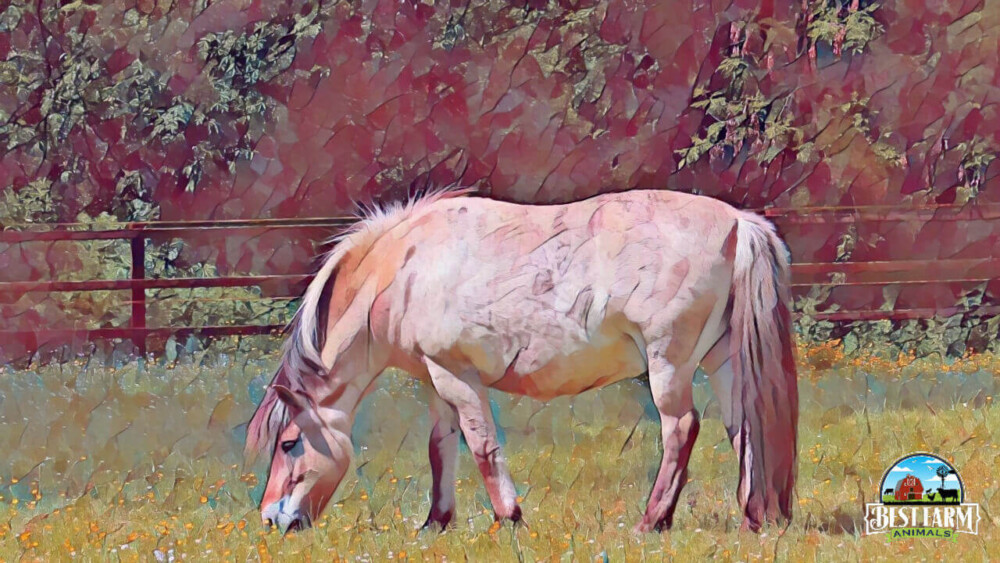 #1 Norwegian Fjord Horses have been around since the Ice Age

The Norwegian Fjord horse is one of the oldest horse breeds in the world and one of the purest. It’s changed very little since it was first domesticated some 4,000 years ago and still resembles the horses depicted in cave art painted around 30,000 years ago. Like the Norwegian Fjord, these horses “are generally stocky, mostly tan or yellowish with a white belly, and usually shown with a stiff, dark mane.”

Norwegian Fjords are one of the oldest breeds in the world and one of the few to have retained their primitive color and character.

All Norwegian Fjord horses are dun, with around 90% being brown dun. Other acceptable colors for the breed include red dun, yellow dun, and white dun or gray.

In addition to their dun coloration, many Fjords have primitive markings such as a dark dorsal stripe, horizontal stripes on the lower legs, and dark tips at the end of their ears.

#3 The Norweigan Fjord has a Unique Mane

The mane is a single color on most horses, but Norwegian Fjords are slightly different. Although the outer hair of the mane is white, the center hair is usually black.

Traditionally, the mane is cut short, so it stands upright, revealing its two-toned beauty. Some owners even trim the white hairs shorter to emphasize the dark inner stripe.

Norwegian Fjord horses are highly versatile because they have strength, agility, and a willingness to work. While most horse breeds specialize in either driving or riding, Norwegian Fjords can do it all. They may not beat a Quarterhorse in a barrel race, but they’ll give it their best shot. 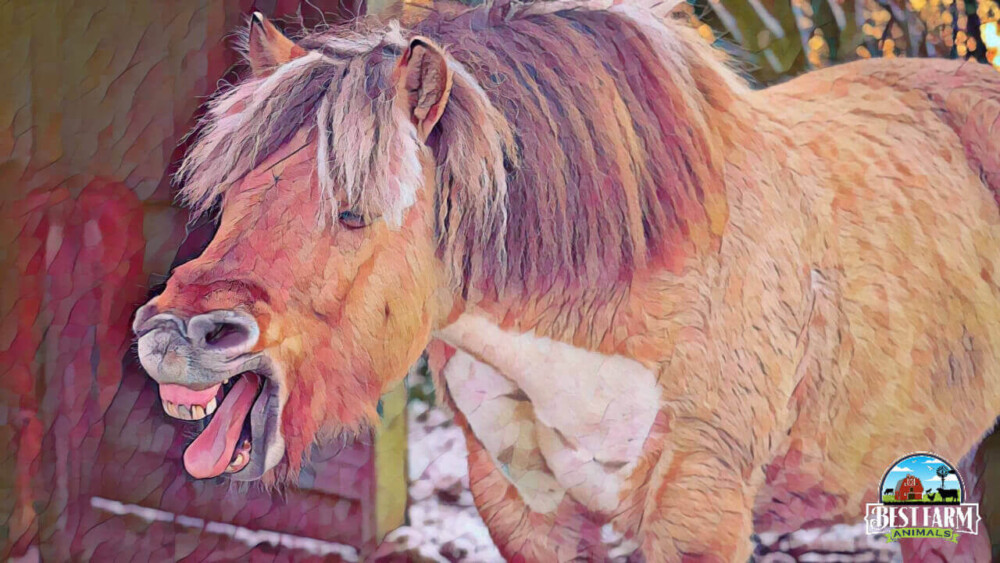 The Norwegian Fjord horse has changed little over the years. Although attempts were made to cross it with another Norwegian horse breed, the experiment was abandoned in 1907. As a result, it “has one of the longest histories of any breed without crossbreeding with other horse types.”

What You’ll Pay For a Norwegian Fjord

Despite their strength and versatility, Norwegian Fjord horses aren’t costly. They didn’t quite make it into our top 10 cheap horse breeds, but they’re not that far behind.

If you buy a purebred Fjord from a reputable breeder, you should expect to pay between $3,000 and $10,000. That’s the same ballpark figure you’d be looking at for an American Paint or Quarter Horse and is about the average for a pleasure riding or driving horse.

This article gives more insights into the cost of a horse to buy and own in 2022.

Despite being indigenous to Norway, Norwegian Fjords have gained widespread popularity and are now found worldwide.

Around 6,500 Fjord horses live in the US, and the breed is also popular throughout Europe, South America, Australia, and New Zealand.

7 Insights into Life with a Norwegian Fjord

Fjords are tough little horses with thick coats that can endure rough winters with minimal care. They do well on pasture and rarely need stabling, even in severe weather. Although they may take advantage of free-choice access to shelter, they generally prefer being out in the open.

#2 Fjord Horses are Prone to Obesity

Fjord horses gain weight easily and are prone to metabolic problems like laminitis, metabolic syndrome, and Pituitary pars intermedia dysfunction (PPID). It doesn’t take much for a Fjord to overeat, so prospective owners should consider having a designated bare-ground paddock available to restrict pasture time.

Most Fjord Horses will subsist on grass and hay, rarely requiring any additional grain unless they’re incredibly active or working hard. This breed also performs better on a low protein diet and is likelier to thrive on timothy grass than alfalfa. 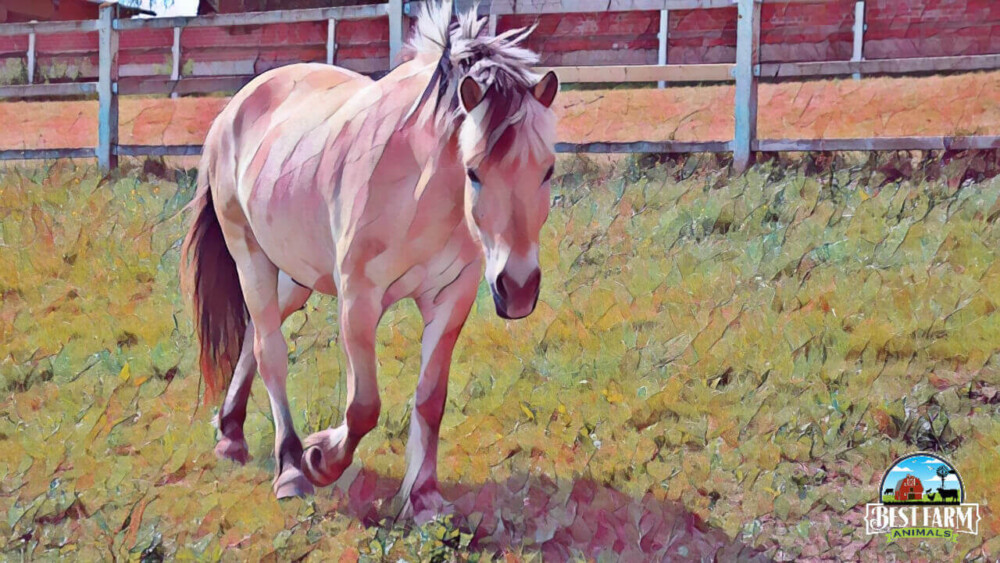 Norwegian Fjord Horses once lived in the rudder mountainous regions of western Norway. There, they developed naturally strong hoof walls and a thick sole that makes them the ideal candidate for keeping barefoot. “Many riders state that their Fjord horse does well without shoes,” and with the proper hoof care, yours should too.

According to the experts at Lost Creek Fjord Horses in Oregon, “If Fjords aren’t busy eating or sleeping, they’re going to be busy looking for entertainment …”. All horses need some mental stimulation, especially intelligent ones like the Norwegian Fjord. A Norwegian Fjord needs company, plenty of exercise, and mental stimulation in the form of an enriched environment.

When properly cared for, a fjord horse can live well into its 30s. Not only that, but they often remain active and alert enough to be ridden up until their final years. Purchasing a young Norwegian Fjord is a long-term commitment, while a 15-25-year-old Fjord could give you just as many years under saddle as a typical-breed 5-year-old.

The Norwegian Fjord’s mindset is closer to that of a mule or donkey than a horse. Instead of trying to run away from something that scares them, they’re more likely to freeze.

This reaction is often interpreted as stubbornness, leaving those more used to training horses staring at a “big dun-colored brick wall.”

Like a mule, a Norwegian Fjord is more likely to question leadership than blindly trust it, which means training requires patience and consistency. 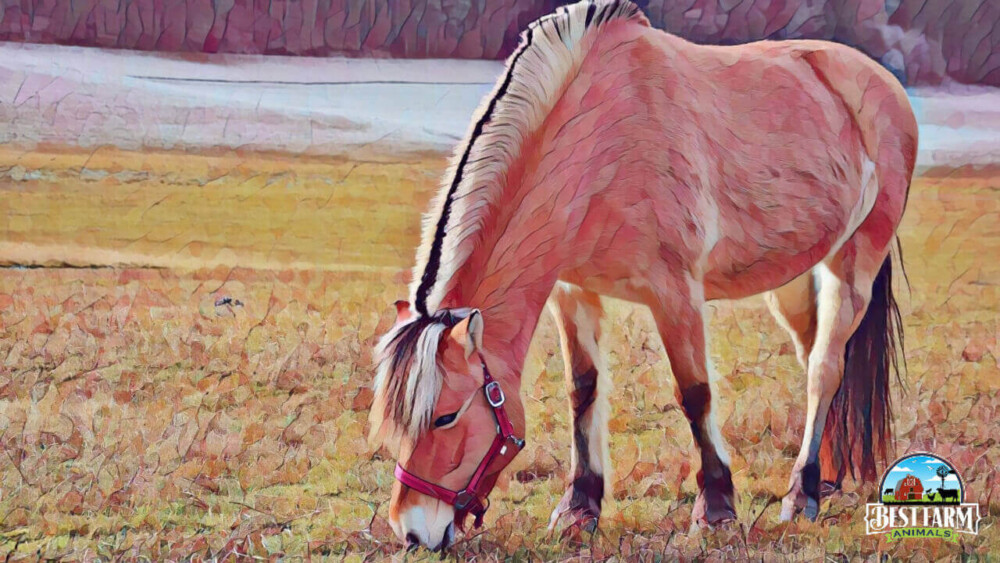 Norwegian Fjord Horses are versatile creatures that combine strength and agility with intelligence and an easygoing attitude.

They compete successfully in almost every discipline, from show jumping to endurance riding, pleasure driving to dressage.

Although they don’t have the speed of a Quarter horse, their natural agility makes them capable of barrel racing and other rodeo events.

The Norwegian Fjord is a hardy horse breed that requires little supplementary feeding or stabling. They generally prefer an outdoor life and have such strong hooves that they rarely need shoes.

Quiet enough to be suitable for children, they’re also strong enough to carry adults and spirited enough to give an experienced horseman an exhilarating and enjoyable ride.